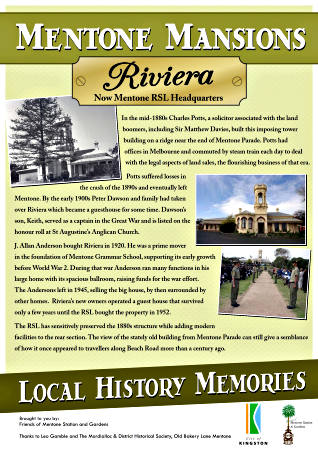 In the mid-1880s Charles Potts, a solicitor associated with the land boomers, including Sir Matthew Davies, built this imposing tower building on a ridge near the end of Mentone Parade. Potts had offices in Melbourne and commuted by steam train each day to deal with the legal aspects of land sales, the flourishing business of that era. Potts suffered losses in the crash of the 1890s and eventually left Mentone. By the early 1900s Peter Dawson and family had taken over Riviera which became a guesthouse for some time. Dawson’s son, Keith, served as a captain in the Great War and is listed on the honour roll at St Augustine’s Anglican Church.

J. Allan Anderson bought Riviera in 1920. He was a prime mover in the foundation of Mentone Grammar School, supporting its early growth before World War 2. During that war Anderson ran many functions in his large home with its spacious ballroom, raising funds for the war effort. The Andersons left in 1945, selling the big house, by then surrounded by other homes. Riviera’s new owners operated a guest house that survived only a few years until the RSL bought the property in 1952.

The RSL has sensitively preserved the 1880s structure while adding modern facilities to the rear section. The view of the stately old building from Mentone Parade can still give a semblance of how it once appeared to travellers along Beach Road more than a century ago.