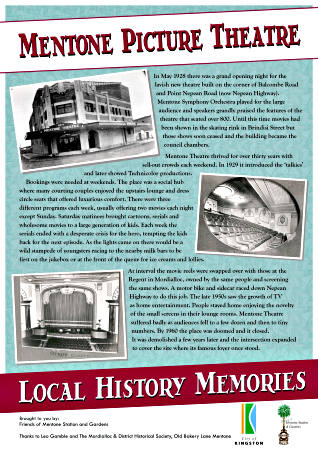 In May 1928 there was a grand opening night for the lavish new theatre built on the corner of Balcombe Road and Point Nepean Road (now Nepean Highway). Mentone Symphony Orchestra played for the large audience and speakers grandly praised the features of the theatre that seated over 800. Until this time movies had been shown in the skating rink in Brindisi Street but those shows soon ceased and the building became the council chambers.

Mentone Theatre thrived for over thirty years with sell-out crowds each weekend. In 1929 it introduced the ‘talkies’ and later showed Technicolor productions. Bookings were needed at weekends. The place was a social hub where many courting couples enjoyed the upstairs lounge and dress circle seats that offered luxurious comfort. There were three different programs each week, usually offering two movies each night except Sunday. Saturday matinees brought cartoons, serials and wholesome movies to a large generation of kids. Each week the serials ended with a desperate crisis for the hero, tempting the kids back for the next episode. As the lights came on there would be a wild stampede of youngsters racing to the nearby milk bars to be first on the jukebox or at the front of the queue for ice creams and lollies.

At interval the movie reels were swapped over with those at the Regent in Mordialloc, owned by the same people and screening the same shows. A motor bike and sidecar raced down Nepean Highway to do this job. The late 1950s saw the growth of TV as home entertainment. People stayed home enjoying the novelty of the small screens in their lounge rooms. Mentone Theatre suffered badly as audiences fell to a few dozen and then to tiny numbers. By 1960 the place was doomed and it closed. It was demolished a few years later and the intersection expanded to cover the site where its famous foyer once stood.