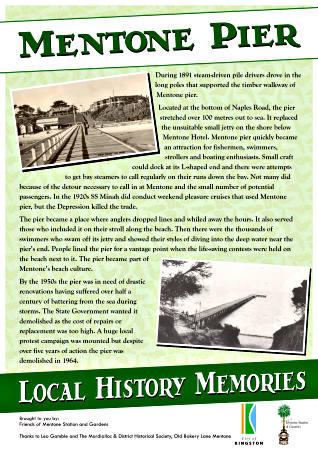 During 1891 steam-driven pile drivers drove in the long poles that supported the timber walkway of Mentone pier.

Located at the bottom of Naples Road, the pier stretched over 100 metres out to sea. It replaced the unsuitable small jetty on the shore below Mentone Hotel. Mentone pier quickly became an attraction for fishermen, swimmers, strollers and boating enthusiasts. Small craft could dock at its L-shaped end and there were attempts to get bay steamers to call regularly on their runs down the bay. Not many did because of the detour necessary to call in at Mentone and the small number of potential passengers. In the 1920s SS Minah did conduct weekend pleasure cruises that used Mentone pier, but the Depression killed the trade.

The pier became a place where anglers dropped lines and whiled away the hours. It also served those who included it on their stroll along the beach. Then there were the thousands of swimmers who swam off its jetty and showed their styles of diving into the deep water near the pier’s end. People lined the pier for a vantage point when the life-saving contests were held on the beach next to it. The pier became part of Mentone’s beach culture.

By the 1950s the pier was in need of drastic renovations having suffered over half a century of battering from the sea during storms. The State Government wanted it demolished as the cost of repairs or replacement was too high. A huge local protest campaign was mounted but despite over five years of action the pier was demolished in 1964.