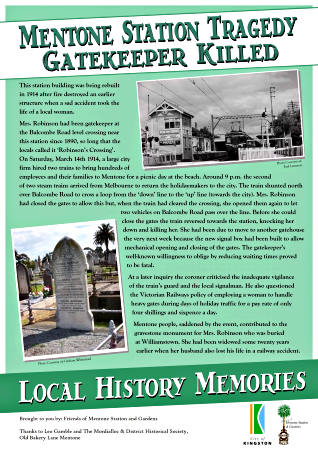 This station building was being rebuilt in 1914 after fire destroyed an earlier structure when a sad accident took the life of a local woman.

Mrs. Robinson had been gatekeeper at the Balcombe Road level crossing near this station since 1890, so long that the locals called it ‘Robinson’s Crossing’. On Saturday, March 14th 1914, a large city firm hired two trains to bring hundreds of employees and their families to Mentone for a picnic day at the beach. Around 9 p.m. the second of two steam trains arrived from Melbourne to return the holidaymakers to the city. The train shunted north over Balcombe Road to cross a loop from the ‘down’ line to the ‘up’ line (towards the city). Mrs. Robinson had closed the gates to allow this but, when the train had cleared the crossing, she opened them again to let two vehicles on Balcombe Road pass over the line. Before she could close the gates the train reversed towards the station, knocking her down and killing her. She had been due to move to another gatehouse the very next week because the new signal box had been built to allow mechanical opening and closing of the gates. The gatekeeper’s well-known willingness to oblige by reducing waiting times proved to be fatal.

At a later inquiry the coroner criticised the inadequate vigilance of the train’s guard and the local signalman. He also questioned the Victorian Railways policy of employing a woman to handle heavy gates during days of holiday traffic for a pay rate of only four shillings and sixpence a day.

Mentone people, saddened by the event, contributed to the gravestone monument for Mrs. Robinson who was buried at Williamstown. She had been widowed some twenty years earlier when her husband also lost his life in a railway accident.