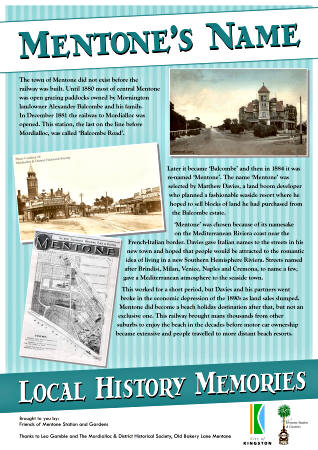 The town of Mentone did not exist before the railway was built. Until 1880 most of central Mentone was open grazing paddocks owned by Mornington landowner Alexander Balcombe and his family. In December 1881 the railway to Mordialloc was opened. This station, the last on the line before Mordialloc, was called ‘Balcombe Road’.

Later it became ‘Balcombe’ and then in 1884 it was re-named ‘Mentone’. The name ‘Mentone’ was selected by Matthew Davies, a land boom developer who planned a fashionable seaside resort where he hoped to sell blocks of land he had purchased from the Balcombe estate.

‘Mentone’ was chosen because of its namesake on the Mediterranean Riviera coast near the French-Italian border. Davies gave Italian names to the streets in his new town and hoped that people would be attracted to the romantic idea of living in a new Southern Hemisphere Riviera. Streets named after Brindisi, Milan, Venice, Naples and Cremona, to name a few, gave a Mediterranean atmosphere to the seaside town.

This worked for a short period, but Davies and his partners went broke in the economic depression of the 1890s as land sales slumped. Mentone did become a beach holiday destination after that, but not an exclusive one. This railway brought many thousands from other suburbs to enjoy the beach in the decades before motor car ownership became extensive and people travelled to more distant beach resorts.