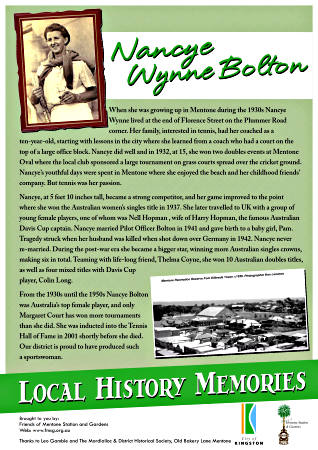 When she was growing up in Mentone during the 1930s Nancye Wynne lived at the end of Florence Street on the Plummer Road corner. Her family, interested in tennis, had her coached as a ten-year-old, starting with lessons in the city where she learned from a coach who had a court on the top of a large office block. Nancye did well and in 1932, at 15, she won two doubles events at Mentone Oval where the local club sponsored a large tournament on grass courts spread over the cricket ground. Nancye’s youthful days were spent in Mentone where she enjoyed the beach and her childhood friends’ company. But tennis was her passion.

Nancye, at 5 feet 10 inches tall, became a strong competitor, and her game improved to the point where she won the Australian women’s singles title in 1937. She later travelled to UK with a group of young female players, one of whom was Nell Hopman , wife of Harry Hopman, the famous Australian Davis Cup captain. Nancye married Pilot Officer Bolton in 1941 and gave birth to a baby girl, Pam. Tragedy struck when her husband was killed when shot down over Germany in 1942. Nancye never re-married. During the post-war era she became a bigger star, winning more Australian singles crowns, making six in total. Teaming with life-long friend, Thelma Coyne, she won 10 Australian doubles titles, as well as four mixed titles with Davis Cup player, Colin Long.

From the 1930s until the 1950s Nancye Bolton was Australia’s top female player, and only Margaret Court has won more tournaments than she did. She was inducted into the Tennis Hall of Fame in 2001 shortly before she died. Our district is proud to have produced such a sportswoman.