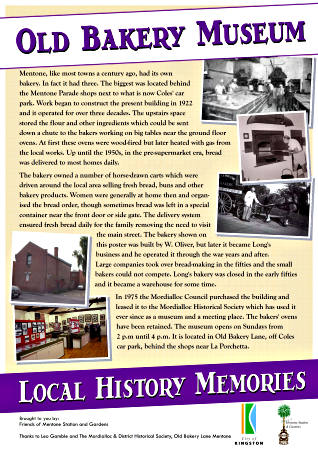 Mentone, like most towns a century ago, had its own bakery. In fact it had three. The biggest was located behind the Mentone Parade shops next to what is now Coles' car park. Work began to construct the present building in 1922 and it operated for over three decades. The upstairs space stored the flour and other ingredients which could be sent down a chute to the bakers working on big tables near the ground floor ovens. At first these ovens were wood-fired but later heated with gas from the local works. Up until the 1950s, in the pre-supermarket era, bread was delivered to most homes daily.

The bakery owned a number of horse-drawn carts which were driven around the local area selling fresh bread, buns and other bakery products. Women were generally at home then and organised the bread order, though sometimes bread was left in a special container near the front door or side gate. The delivery system ensured fresh bread daily for the family removing the need to visit the main street. The bakery shown on this poster was built by W. Oliver, but later it became Long's business and he operated it through the war years and after. Large companies took over bread-making in the fifties and the small bakers could not compete. Long's bakery was closed in the early fifties and it became a warehouse for some time.

In 1975 the Mordialloc Council purchased the building and leased it to the Mordialloc Historical Society which has used it ever since as a museum and a meeting place. The bakers' ovens have been retained. The museum opens on Sundays from 2 p.m until 4 p.m. It is located in Old Bakery Lane, off Coles car park, behind the shops near La Porchetta.