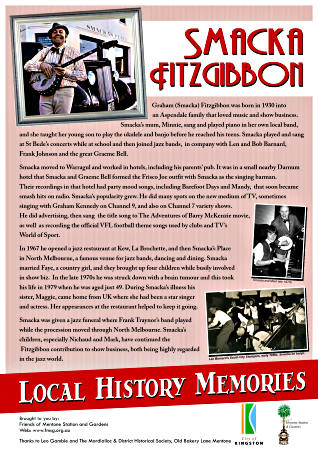 Graham (Smacka) Fitzgibbon was born in 1930 into an Aspendale family that loved music and show business. Smacka’s mum, Minnie, sang and played piano in her own local band, and she taught her young son to play the ukulele and banjo before he reached his teens. Smacka played and sang at St Bede’s concerts while at school and then joined jazz bands, in company with Len and Bob Barnard, Frank Johnson and the great Graeme Bell.

Smacka moved to Warragul and worked in hotels, including his parents’ pub. It was in a small nearby Darnum hotel that Smacka and Graeme Bell formed the Frisco Joe outfit with Smacka as the singing barman. Their recordings in that hotel had party mood songs, including Barefoot Days and Mandy, that soon became smash hits on radio. Smacka’s popularity grew. He did many spots on the new medium of TV, sometimes singing with Graham Kennedy on Channel 9, and also on Channel 7 variety shows. He did advertising, then sang the title song to The Adventures of Barry McKenzie movie, as well as recording the official VFL football theme songs used by clubs and TV’s World of Sport.

In 1967 he opened a jazz restaurant at Kew, La Brochette, and then Smacka’s Place in North Melbourne, a famous venue for jazz bands, dancing and dining. Smacka married Faye, a country girl, and they brought up four children while busily involved in show biz. In the late 1970s he was struck down with a brain tumour and this took his life in 1979 when he was aged just 49. During Smacka’s illness his sister, Maggie, came home from UK where she had been a star singer and actress. Her appearances at the restaurant helped to keep it going.

Smacka was given a jazz funeral where Frank Traynor’s band played while the procession moved through North Melbourne. Smacka’s children, especially Nichaud and Mark, have continued the Fitzgibbon contribution to show business, both being highly regarded in the jazz world.