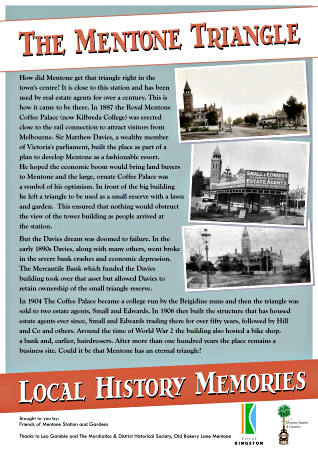 How did Mentone get that triangle right in the town's centre? It is close to this station and has been used by real estate agents for over a century. This is how it came to be there. In 1887 the Royal Mentone Coffee Palace (now Kilbreda College) was erected close to the rail connection to attract visitors from Melbourne. Sir Matthew Davies, a wealthy member of Victoria's parliament, built the place as part of a plan to develop Mentone as a fashionable resort. He hoped the economic boom would bring land buyers to Mentone and the large, ornate Coffee Palace was a symbol of his optimism. In front of the big building he left a triangle to be used as a small reserve with a lawn and garden. This ensured that nothing would obstruct the view of the tower building as people arrived at the station.

But the Davies dream was doomed to failure. In the early 1890s Davies, along with many others, went broke in the severe bank crashes and economic depression. The Mercantile Bank which funded the Davies building took over that asset but allowed Davies to retain ownership of the small triangle reserve.

In 1904 The Coffee Palace became a college run by the Brigidine nuns and then the triangle was sold to two estate agents, Small and Edwards. In 1906 they built the structure that has housed estate agents ever since, Small and Edwards trading there for over fifty years, followed by Hill and Co and others. Around the time of World War 2 the building also hosted a bike shop. a bank and, earlier, hairdressers. After more than one hundred years the place remains a business site. Could it be that Mentone has an eternal triangle?