The Story of Violet Murrell and Garryowen: Champion Horsewoman of Victoria 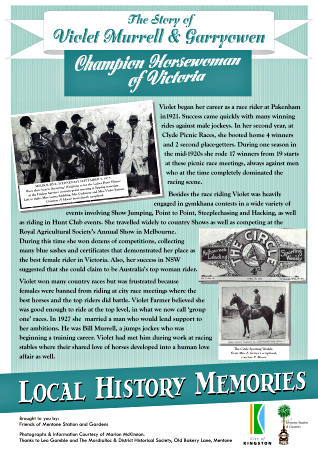 Violet began her career as a race rider at Pakenham in1921. Success came quickly with many winning rides against male jockeys. In her second year, at Clyde Picnic Races, she booted home 4 winners and 2 second place-getters. During one season in the mid-1920s she rode 17 winners from 19 starts at these picnic race meetings, always against men who at the time completely dominated the racing scene.

Besides the race riding Violet was heavily engaged in gymkhana contests in a wide variety of events involving Show Jumping, Point to Point, Steeplechasing and Hacking, as well as riding in Hunt Club events. She travelled widely to country Shows as well as competing at the Royal Agricultural Society’s Annual Show in Melbourne. During this time she won dozens of competitions, collecting many blue sashes and certificates that demonstrated her place as the best female rider in Victoria. Also, her success in NSW suggested that she could claim to be Australia’s top woman rider.

Violet won many country races but was frustrated because females were banned from riding at city race meetings where the best horses and the top riders did battle. Violet Farmer believed she was good enough to ride at the top level, in what we now call ‘group one’ races. In 1927 she married a man who would lend support to her ambitions. He was Bill Murrell, a jumps jockey who was beginning a training career. Violet had met him during work at racing stables where their shared love of horses developed into a human love affair as well.