The Story of Violet Murrell and Garryowen: The Fire 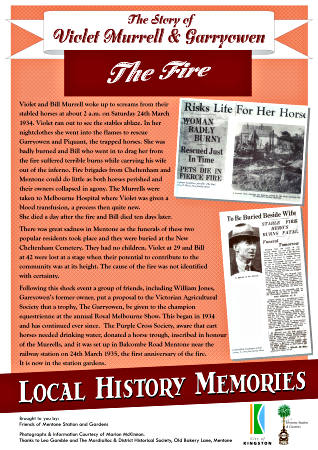 Violet and Bill Murrell woke up to screams from their stabled horses at about 2 a.m. on Saturday 24th March 1934. Violet ran out to see the stables ablaze. In her nightclothes she went into the flames to rescue Garryowen and Piquant, the trapped horses. She was badly burned and Bill who went in to drag her from the fire suffered terrible burns while carrying his wife out of the inferno. Fire brigades from Cheltenham and Mentone could do little as both horses perished and their owners collapsed in agony. The Murrells were taken to Melbourne Hospital where Violet was given a blood transfusion, a process then quite new. She died a day after the fire and Bill died ten days later.

There was great sadness in Mentone as the funerals of these two popular residents took place and they were buried at the New Cheltenham Cemetery. They had no children. Violet at 29 and Bill at 42 were lost at a stage when their potential to contribute to the community was at its height. The cause of the fire was not identified with certainty.

Following this shock event a group of friends, including William Jones, Garryowen’s former owner, put a proposal to the Victorian Agricultural Society that a trophy, The Garryowen, be given to the champion equestrienne at the annual Royal Melbourne Show. This began in 1934 and has continued ever since. The Purple Cross Society, aware that cart horses needed drinking water, donated a horse trough, inscribed in honour of the Murrells, and it was set up in Balcombe Road Mentone near the railway station on 24th March 1935, the first anniversary of the fire. It is now in the station gardens.