The Story of Violet Murrell and Garryowen: The Garryowen Horse Trough 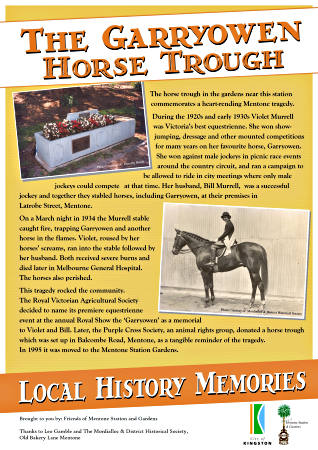 The horse trough in the gardens near this station commemorates a heart-rending Mentone tragedy.

During the 1920s and early 1930s Violet Murrell was Victoria’s best equestrienne. She won show jumping, dressage and other mounted competitions for many years on her favourite horse, Garryowen. She won against male jockeys in picnic race events around the country circuit, and ran a campaign to be allowed to ride in city meetings where only male jockeys could compete at that time. Her husband, Bill Murrell, was a successful jockey and together they stabled horses, including Garryowen, at their premises in Latrobe Street, Mentone.

On a March night in 1934 the Murrell stable caught fire, trapping Garryowen and another horse in the flames. Violet, roused by her horses’ screams, ran into the stable followed by her husband. Both received severe burns and died later in Melbourne General Hospital. The horses also perished.

This tragedy rocked the community. The Royal Victorian Agricultural Society decided to name its premiere equestrienne event at the annual Royal Show the ‘Garryowen’ as a memorial to Violet and Bill. Later, the Purple Cross Society, an animal rights group, donated a horse trough which was set up in Balcombe Road, Mentone, as a tangible reminder of the tragedy. In 1995 it was moved to the Mentone Station Gardens.