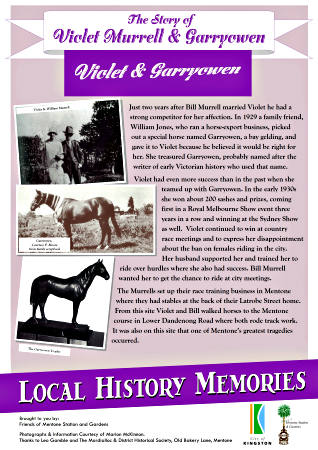 Just two years after Bill Murrell married Violet he had a strong competitor for her affection. In 1929 a family friend, William Jones, who ran a horse-export business, picked out a special horse named Garryowen, a bay gelding, and gave it to Violet because he believed it would be right for her. She treasured Garryowen, probably named after the writer of early Victorian history who used that name.

Violet had even more success than in the past when she teamed up with Garryowen. In the early 1930s she won about 200 sashes and prizes, coming first in a Royal Melbourne Show event three years in a row and winning at the Sydney Show as well. Violet continued to win at country race meetings and to express her disappointment about the ban on females riding in the city. Her husband supported her and trained her to ride over hurdles where she also had success. Bill Murrell wanted her to get the chance to ride at city meetings.

The Murrells set up their race training business in Mentone where they had stables at the back of their Latrobe Street home. From this site Violet and Bill walked horses to the Mentone course in Lower Dandenong Road where both rode track work. It was also on this site that one of Mentone’s greatest tragedies occurred.