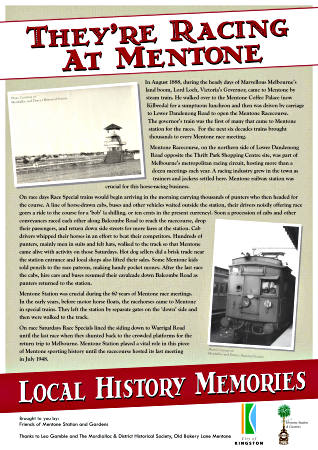 In August 1888, during the heady days of Marvellous Melbourne’s land boom, Lord Loch, Victoria’s Governor, came to Mentone by steam train. He walked over to the Mentone Coffee Palace (now Kilbreda) for a sumptuous luncheon and then was driven by carriage to Lower Dandenong Road to open the Mentone Racecourse. The governor’s train was the first of many that came to Mentone station for the races. For the next six decades trains brought thousands to every Mentone race meeting.

Mentone Racecourse, on the northern side of Lower Dandenong Road opposite the Thrift Park Shopping Centre site, was part of Melbourne’s metropolitan racing circuit, hosting more than a dozen meetings each year. A racing industry grew in the town as trainers and jockeys settled here. Mentone railway station was crucial for this horse-racing business.

On race days Race Special trains would begin arriving in the morning carrying thousands of punters who then headed for the course. A line of horse-drawn cabs, buses and other vehicles waited outside the station, their drivers noisily offering race goers a ride to the course for a ‘bob’ (a shilling, or ten cents in the present currency). Soon a procession of cabs and other conveyances raced each other along Balcombe Road to reach the racecourse, drop their passengers, and return down side streets for more fares at the station. Cab drivers whipped their horses in an effort to beat their competitors. Hundreds of punters, mainly men in suits and felt hats, walked to the track so that Mentone came alive with activity on those Saturdays. Hot dog sellers did a brisk trade near the station entrance and local shops also lifted their sales. Some Mentone kids sold pencils to the race patrons, making handy pocket money. After the last race the cabs, hire cars and buses resumed their cavalcade down Balcombe Road as punters returned to the station.

Mentone Station was crucial during the 60 years of Mentone race meetings. In the early years, before motor horse floats, the racehorses came to Mentone in special trains. They left the station by separate gates on the ‘down’ side and then were walked to the track.

On race Saturdays Race Specials lined the siding down to Warrigal Road until the last race when they shunted back to the crowded platforms for the return trip to Melbourne. Mentone Station played a vital role in this piece of Mentone sporting history until the racecourse hosted its last meeting in July 1948.