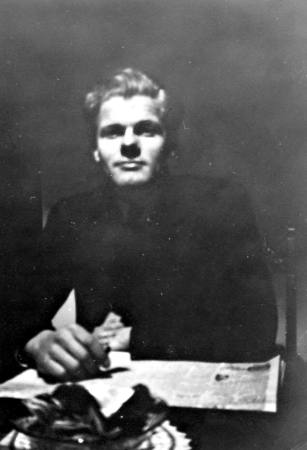 Alan Carey remembers his class singing Kookaburra Sits on the Old Gum Tree at Northcote State School while a visitor walked around listening to individual children. At the end of his visit several pupils were called out to talk to him. He gave Alan a tenor horn and a book of instructions and told him to go home and learn how to play it. Alan lived with his mother, sister and extended family in a terrace house in Northcote where the ‘brick shit house’ was down the back of the property adjoining a cobble stoned lane. This was his rehearsal room as he was not allowed to play with the horn inside the house. [1] Perhaps this was the source of his love of music and enjoyment in singing.

At fourteen years of age he left school to be apprenticed as a printer’s devil, an individual who read copy to identify mistakes in page settings. There he worked with Arthur Gullidge the leader of the Brunswick Salvation Army Band and a prolific composer. Gullidge no doubt added to Alan’s musical knowledge and fostered his love of music. Moving to Mil Lel in South Australia he played football with the local team and was making excellent cheese at the Mil Lel Cheese Factory. During this time, as a seventeen year old, he played the big B Flat Tuba with the Mount Gambier Salvation Army Band.

With the outbreak of the Second World War, at nineteen years of age and working as a motor mechanic in Mount Gambier, Alan enlisted in the Australian Army where he joined the Mechanical Equipment Company of the Royal Australian Engineers. (VX66153) Reflecting on this action time some years later, Alan said ‘the general attitude of most young men was that going to war sounded like fun; after all things were pretty grim at home. You were flat out getting a feed half the time. In the army you were going to get a uniform, three feeds a day, a bed to sleep in and money for a beer whenever you wanted. Who would knock that back?’ 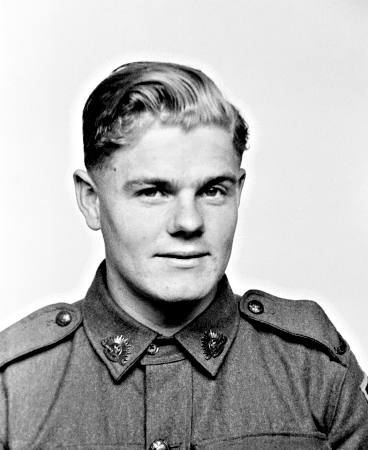 After learning about digging holes and how to handle dynamite at a training camp in New South Wales he was entrained with comrades to the Northern Territory. There the job was to build a sealed road from Alice Springs to Katherine replacing what was a track that became a quagmire in the wet and a dust bowl in the dry. [2]

On 4 May 1943 Alan was discharged from the army to enlist the following day in the RAAF. He spent time at the RAAF Empire Training School in Ballarat flying the Wackett training aircraft and the Anson. Later he trained on the Wellington. Almost twelve months later he sailed on the luxury liner SS Lurline to San Francisco. From New York he travelled to Liverpool with a thousand or more American soldiers in a convoy of thirty ships. Once in England, Alan continued his training as a wireless operator learning the set up of the Lancaster and Short Sunderlands. Before he could take an active part in the conflict the war ended, consequently while making a contribution to the war effort he did not fire a shot in anger nor did he get shot at during his military service in WW2. [3]

On 4 September 1945 Alan sailed home on the RMS Aquitania and in January 1946 was promoted to the rank of Warrant Officer. During his time in the RAAF Alan took the opportunities to join colleagues in the RAAF band playing the tenor horn.

After his discharge from the RAAF in Adelaide early in 1946 he moved to Melbourne on the encouragement of his Uncle Sam who offered him work in his estate agency and land development company. Alan declined this offer and moved to Mentone where an air force colleague lived. It was there that he ran a bicycle repair business for eight years at 138 Mentone Parade sharing the small triangular block of land with Small and Edwards Estate Agency. Later he worked in several jobs; an insurance company representative, a sales representative for a builder’s hardware company, as the secretary of IOOF using a room in his home at 79 Lower Dandenong Road Mentone as an office, and finally caretaker at Mentone Park Primary School. Previously he had served on the Committee of the school and been associated with working bees to turn what was formerly a paddock into playgrounds. 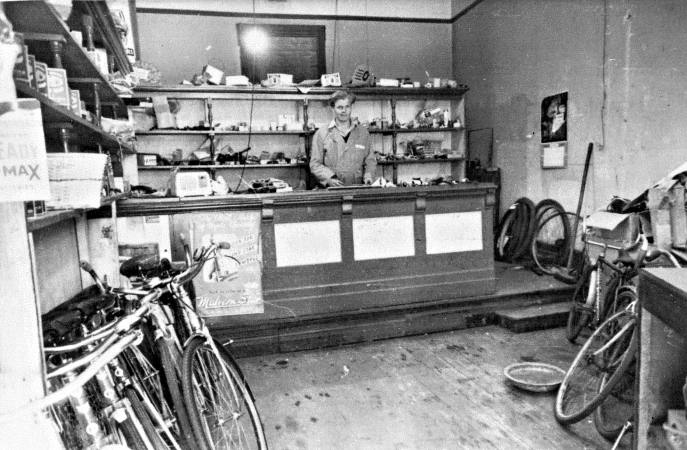 Early after war service Alan accepting an offer of board and lodging in Parkdale and at that time joined the choir of the local Methodist Church. There he met other people who shared his interest in singing and some were pupils of Roy Warren. Alan said, ‘ I thought I had a little talent and was always interested in pushing myself so I went to Roy Warren for singing coaching and joined the Mordialloc Philharmonic Choir and Minnie Everett’s Musical Comedy Company.’ [4]

Roy Warren had responded to advertisements in the local newspaper and to articles written by E C Trait advocating the formation of a City of Mordialloc Philharmonic Society. Warren offered his services in the establishment of such a society and was subsequently appointed conductor and musical director. It was through the encouragement of Warren that Alan Carey joined three other of Warren’s students who were part of the singing group Bohemian Quartet. One of the original four in the group, Don Smibert, had left to pursue a professional career in music. It was this vacancy that Alan filled. Alan said, ‘We went around singing on the radio, the P & A Parade, Are You an Artist? and at footy shows held in town halls where we acted as singing waiters. For this we received a couple of bob.’ In addition to the performances by the Bohemian Quartet, Carey contributed as a member of the Philharmonic Choir singing in several programs presented at the Mentone City Hall including a Christmas program, and Handel’s Messiah. Alan recalled returning from military service and having to find a dinner suit before being able to perform with the Society.

Another outlet for Alan’s interest in singing was Minnie Everett’s Musical Comedy Company. The company was launched in February 1946 when Minnie was living at 5 Charman Road, Mentone. Previously Minnie Everett had an extensive career in the theatre as a dancer, choreographer and producer. She was ballet mistress for thirty years with J C Williamson Ltd. Now at seventy years of age she was embarking on a project to bringing public performances of well known and popular shows to Mentone. Alan Carey and friends from local church choirs responded enthusiastically to the invitation to join the new company.

Alan was in the cast of Sally, Florodora, Spread it Aboard , Belle of New York and Miss Gibbs, all productions that received praise from local critics. He was a member of the ‘gentlemen in the chorus’ in Sally and was noted in a review along with the two Ferguson boys, Hicks, Nally, Robinson, Perris, Ruddell, Lang and Stanley. The critic said they deserved special mention because ‘quite often Gentlemen of the Chorus are a pain the in the neck but these chaps are the real goods.’ [5] With Florodora the audience greatly enjoyed the Sextette of which Alan Carey was a member. The Florodora Sextette, consisting of Marjorie Head, Betty Fleiner, Marjori Powes, Esther Smythe, Norma Graham and Lois Scott with partners Ron Ferguson, Alf Goodlife, Jack Ferguson, Pat Diamond, Alan Carey and David Nally was said to ‘ hold up the show’ in one of their performances. Their singing ‘Tell Me Pretty Maiden’ drew strong applause. [6] When reviewing the Miss Gibbs production a local reporter mentioned Alan Carey as an individual deserving mention, for his biggest part yet with the company. [7] He played the part of the Colonel. 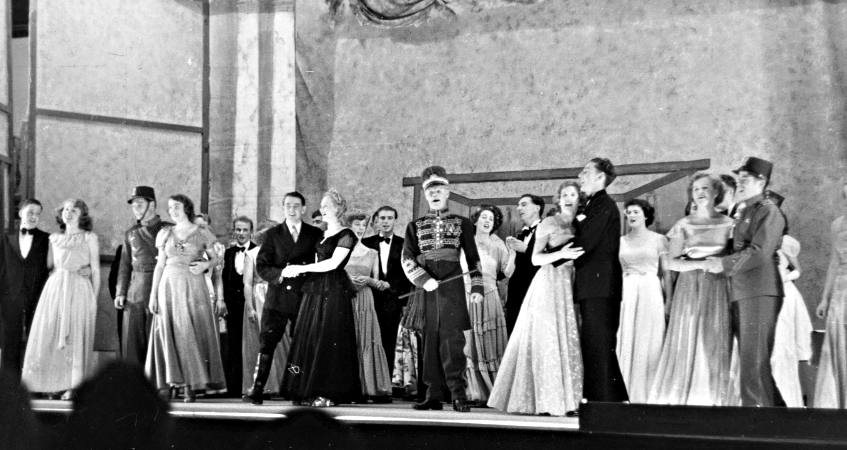 Alan Carey recalled Minnie Everett as a short fat woman full of enthusiasm with a great ability to teach dance. When he was in the RAAF in England during the war he accompanied some of his service mates to a local dance even though he couldn’t dance. Once there a number of English girls were determined to teach him. As a result he was constantly on the dance floor learning new steps. The next day he was aware that there were muscles in his body that he did not regularly use. It was on this very basic experience that Minnie successfully built. [8]

After the war Alan joined the Mentone Branch of the Returned Servicemen’s League (RSL) where he was a keen member of the cricket team. As a spin bowler and a left hander he had reasonable success. In November 1963 playing against Chelsea he claimed two wickets, one bowled and one caught. Playing against the Golds in that same year he took four wickets and scored one run before being caught. His team mates R Harding and J Brown were the run getters for Mentone but the Golds out scored them to win the innings. On other occasions his batting success was better being in the high twenties. However, he saw himself as a bowler rather than a batsman. In one season he bowled 57 overs for 309 runs gaining eighteen wickets. [9] In 1970 he was made a life member of the cricket club. About ten years later, at fifty years of age, with the help of other players he and Glen Phillips formed the Cheltenham Mordialloc RSL Cricket Club. There he became the player coach. The reason suggested for this change of loyalties was that Alan was not getting a game with Mentone. Apparently the new group of selectors were not impressed with his bowling or batting figures! At sixty six years of age he was still enjoying the occasional game of cricket with his Masonic brethren, from the Mordialloc Lodge of Charity. 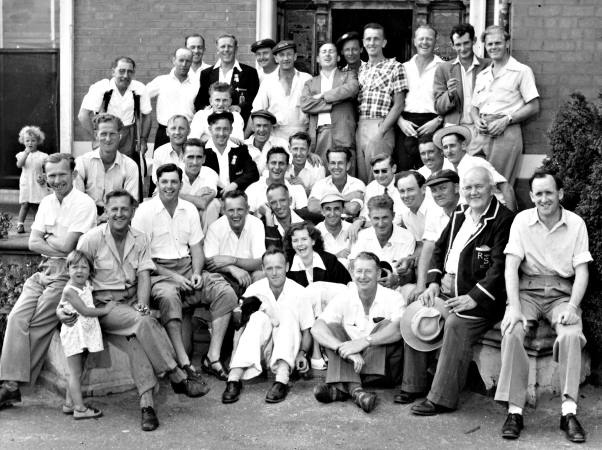 Alan was thirty nine when he was initiated into the Mordialloc Lodge of Charity at the Mordialloc Temple. This was the beginning of a long association with Freemasonry. He was made Master of the Mordialloc Lodge of Charity in 1973 and sixteen years later appointed to the United Grand Lodge of Victoria where he held Grand Rank: PGSwdB 1989, PJGD 1996 and PGIWkgs in 2005. On 9 November 2011 when 89 years of age he was presented, at his Mordialloc lodge, with his 50 year jewel, an award for 50 years service to Freemasonry. It was through his membership of the lodge that Alan continued his interest in singing. He was an active member of the Grand Lodge choir which sings in lodges to augment the ritual, and to entertain at small fund raising concerts and nursing homes. 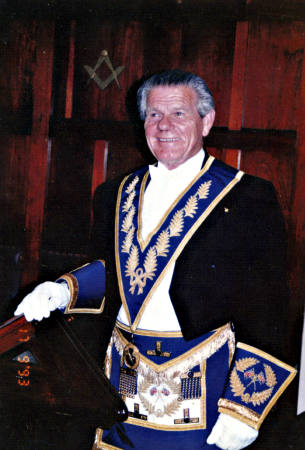 Alan Carey died at Como Private Hospital in Parkdale on 11 December 2012 at ninety years of age. At the service at Le Pine Funerals Mordialloc, celebrating Alan’s life members of the Grand Lodge choir were present and sang ‘Lead Kindly Light’ and ‘As the Tree Falls’ as a special tribute to their late brother. 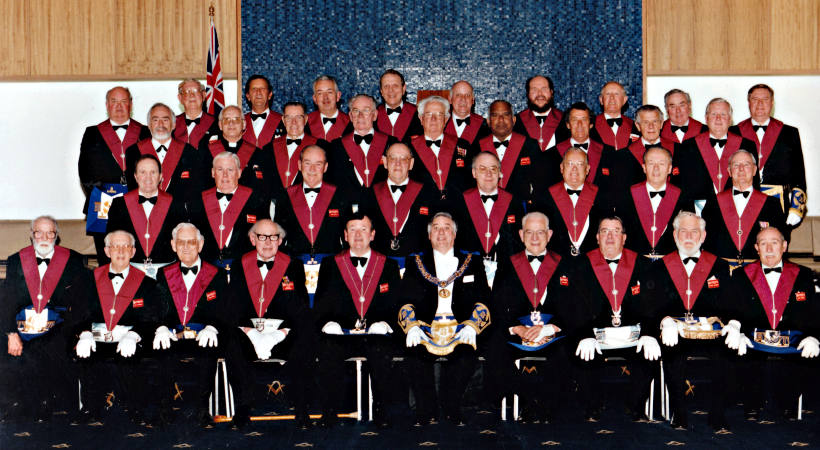