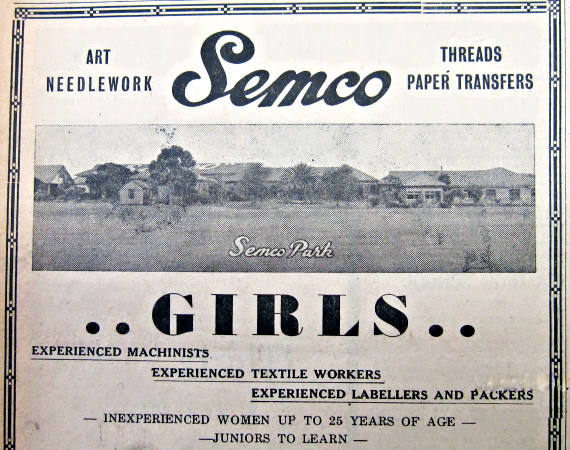 Towards the end of the Second World War E J Trait, the forward-thinking editor of Standard News, then the local newspaper for much of area we now call Kingston, conducted a campaign for decentralisation of industry to suburbs away from the then industrial belt around Richmond, Collingwood and other inner suburbs. As part of this, in 1944, he featured Semco Pty Ltd, a textile firm situated in Black Rock, on the fringe of Sandringham.

Semco began in 1907 as a small venture in the Melbourne CBD, where the acumen of businessman, Stanley Mullen, led to the importing of many paper goods such as postcards, paper transfers, cardboard goods and other printed items. In 1911 the city building containing Semco’s works was destroyed by fire. Mullen died not long after this but the new governing director of the firm, C H Mylis, had innovative plans for the business. He wanted the firm to become an exemplary modern enterprise that treated staff with fairness, created healthy and spacious working sites, and located factories in areas with surrounding gardens, recreational facilities and fresh air. His factory would eventually be moved away from the ugly, soul-stifling, foul-smelling city area to an outer suburb with sea breezes and open areas of vegetation. He also added cotton fabric products to the output and they soon became the staple items the firm made. By the early 1920s Semco had moved to Cheltenham Road, not far from Bluff Road, in Black Rock, then considered to be an outer suburb. Mylus also ensured that the firm’s founder would not be forgotten. The first three letters of Semco’s name were the initials of Stanley E Mullen.

Semco had a staff that included many young women. Eddie Trait’s article praises the firm for its working conditions and its payment of the correct rates of pay for women in a time of war. Many older women were in the services and Trait appealed to local mothers to get their daughters on to the Semco payroll where they would be safely employed. During World War 2 Manpower Regulations could be used to coerce workers to move into jobs that supported the war effort, but Trait argued that being employed at Semco could make this unlikely as the firm made some goods essential for the war effort. The starting rate for 15-year-olds, mainly girls at Semco, was 25 shillings per week and considered as excellent by Trait. 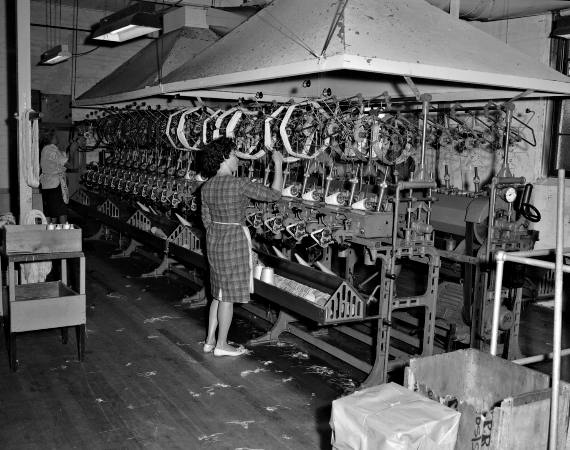 Congenial conditions and interesting work made Semco a local asset for workers. Women were creating new designs for the fabrics and paper products which included tablecloths, babies’ bibs, bedspreads, aprons, soft toys, children’s garments and many more. Trait argued that the soothing effect of fancy designs on needlework even played a role in the war effort when troops up north were sent items as presents. Hospitals at home and in the war zones had stocks of Semco products stamped with pictorial designs. These had been applied to fabrics by screen printers, usually males. Face towels, d’oyleys, tray cloths, tea cosies, aprons and thousands of skeins of multi-coloured thread formed Semco’s contribution to hospital stocks.

Standard News pushed the concept of decentralisation relentlessly. There is a long description of the discomfort city workers underwent in getting to and from work in crowded trains. Workers had to mill around on Flinders Street railway station platforms, stand all the way in the trains hanging on to the straps provided in each carriage, and generally join the throng that resembled an ant heap. Trait heaped copious amounts of praise on the Semco workplace. In a long description of the factory’s environment he noted that no Saturday work was the norm, allowing employees to shop and have ‘hair-dos’ before enjoying a relaxing weekend. The firm fielded Saturday cricket teams and owned a bathing box at Half Moon Bay nearby. Indeed, one staff member had been the vice-captain of the Australian women’s cricket team that toured England in the 1930s. For many years Semco had a female cricket side in the women’s Saturday association.

One twenty-one-year-old female employee explained how she rode her bike to work, ate her sandwiches at lunchtime on the lovely Semco lawns, and felt that she was part of an organisation that valued each individual worker. Not having to pay fares into the city was another reason why this local firm attracted staff.

Eddie Trait wound up his feature on Semco with fulsome praise for the community work that the staff did voluntarily. During the war staff had made patriotic donations of over £1200. The editor listed nearly two dozen separate patriotic causes that the firm’s workers had supported, the largest amounts going to Australian Comforts Fund, Red Cross and the Salvation Army. There was also a tradition of Semco workers helping out at a military convalescent home in the area, where they worked in the office and the pantry. In January 1944 a severe bushfire raged through the ti-tree scrub in Beaumaris, destroying many homes and other property. People were left homeless and suffered other losses. Semco donated money and a lot of clothing to the victims of this local disaster.

The Standard News of this era pushed the policy of decentralisation continuously and the editor, Trait, was magnanimous in his praise of Semco. After the war the firm stayed in production until the early 1990s when it was taken over by cotton merchants, Coates-Paton Pty Ltd. The Black Rock factory closed and the office moved to Mulgrave, while factory work shifted to Launceston in Tasmania before being moved to New Zealand. The fine business that Eddie Trait had admired so much in the 1940s was no longer part of our local world. He would not have appreciated decentralisation that took business offshore. But Trait’s wish for a decentralised growth of industry in our area was fulfilled as time went on. Nylex came in 1945 and its Nepean Highway site also hosted neighbouring industries soon after. Later, the whole Braeside-Mordialloc district became industrialised with many warehouses and factories locating there. 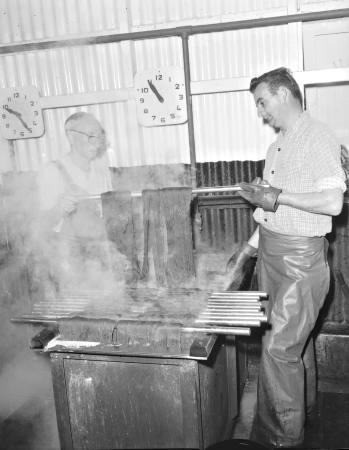 It should be said that Trait used the Standard News to push other policies he espoused. When he took over the editorship in 1937 he published his vision of what the Mentone-Mordialloc bayside district would look like fifty years into the future. There would be large emporiums, a big library, commuter seaplanes landing in the bay, rubberised highways, a racecourse bigger than Flemington, a music bowl near Mentone Oval, and a vast population. Not all of this has come to pass. He also wanted to reserve the land on the eastern side of Nepean Highway between Mentone and Mordialloc to create botanical gardens like those in the city, so that out towards Warren Road there would be a vast woodland of trees, scrub and wildlife as well as sporting grounds. The area is now covered in housing estates with only minimal greenery, apart from the golf courses. Trait was an interesting editor in an era when his local paper had to sell in competition with four city dailies and numerous magazines. Editors of free local papers nowadays probably do not feel the need to be as provocative as E J Trait was back in the decades of the mid-twentieth century. 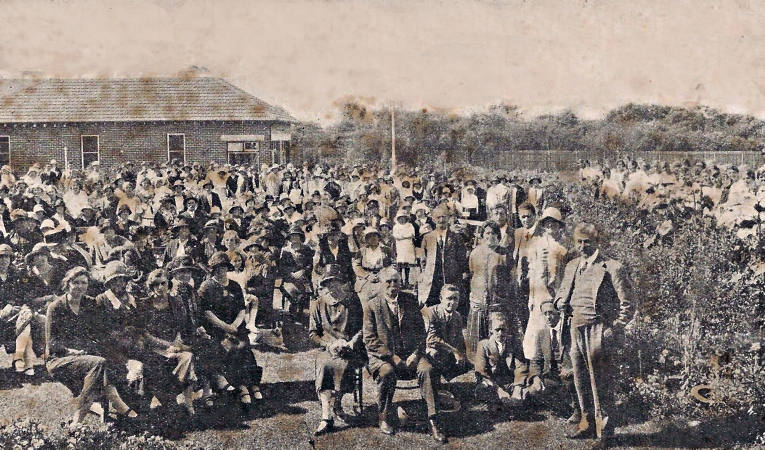