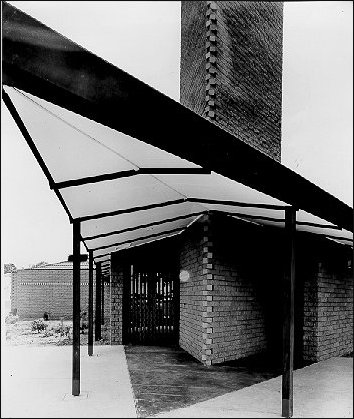 The entrance to St Matthew’s.

Chancellor and Patrick, architects, were engaged in 1965 by the vestry of St Matthew’s Anglican parish, to create and supervise the construction of a new church. This commission required them to design a building to be placed on a triangular piece of land on the corner of Nepean Highway and Park Road Cheltenham. The expected outcome was to be a distinctive but contemporary building so that it could not be "confused with any merely utilitarian secular building." [1] Moreover it was to be planned as ‘one room’ so that nothing hindered members of the congregation taking a full part in the activities of the church - worship, prayer, praise and thanksgiving - and to alleviate the impression that they were only spectators of an action which was done for them. [2] This contrasted with the traditional Gothic structure where the clergy officiated at one end of the building and the congregation sat at the other, often separate not only be distance but also by a choir.

The task given to Chancellor and Patrick was constrained by the presence of other buildings on the site. It was one hundred years earlier that the Anglican community had built its first church on the land. This building along with some of its additions was to remain although its function was to become that of an educational centre. Given this situation Chancellor and Patrick had the options of designing a new church which was in harmony with the old or ignoring the old and designing a building which dominated the site. The latter approach was adopted.

The Cheltenham parish was created in 1865 by excising a portion of the parish of St Andrews Brighton. A small brick church was completed in 1867 to serve a rural community stretching from Brighton South (Moorabbin) to Mordialloc. In 1905 the Bishop of Melbourne, the Right Reverend Henry Lowther Clarke set the memorial stone for a new chancel and sanctuary. The Reverend Thomas Moorhouse, the vicar at the time, was supported in this venture by a vestry which included men active in community affairs. [3] Louis Williams, a church architect, designed vestry additions to the church in 1932. [4] 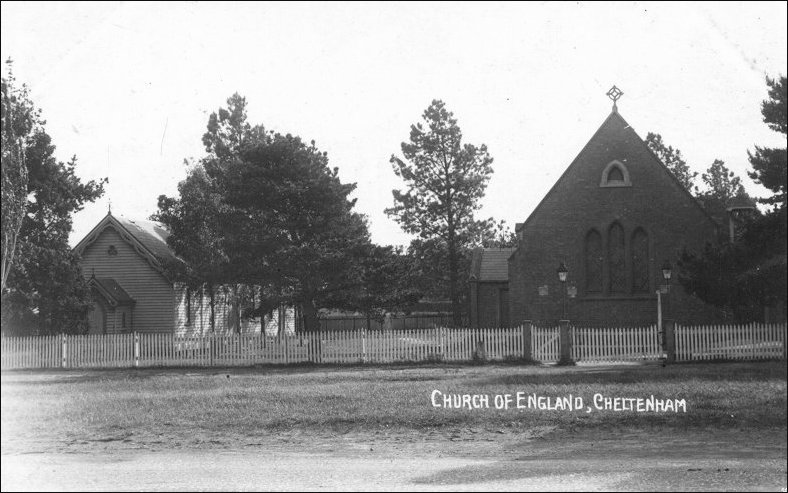 It was during the tenure of the Reverend Robert Dann that further extensions to the old church were made. A few years later the vestry realised that their church and other buildings were expensive to maintain and were no longer adequate to meet the needs of the congregation. A large expenditure of money was required to correct this situation but money was something the parish did not have.

The physical assets of the parish were a piece of land stretching from Nepean Highway to Charman Road with the southern boundary on Park Road and the northern boundary abutting the Cheltenham police station. On the property was erected a brick church, two weatherboard halls, and a weatherboard vicarage. Other portions of the land were occupied by two asphalt tennis courts and a children’s playground maintained by the municipal council. All the weatherboard buildings were in a dilapidated condition and the vicarage was considered to be poorly placed given its remoteness from the other buildings on the property. [5]

Following an analysis of the situation the chief recommendation was that the vicarage should be demolished and the Charman Road land sold for commercial use. The money gained from the sale was devoted to the erection of a new vicarage on the former tennis courts and a new church built on the triangular piece of land on the corner of Nepean Highway and Park Road after the removal of the halls. 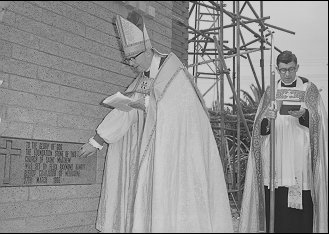 With the approval of the Diocese, and the support of a local committee Chancellor and Patrick proceeded to design the new church using simple materials, left wherever possible in their natural state.[6] Coloured split face concrete blocks were used for both external and internal walls. Window trim was cedar timber stained dark brown. Clear window panes allowed the infusion of natural light into the church and permitted people to look out to a memorial garden of native plants. The pyramid shaped roof was covered with dark brown cement tiles and featured perspex skylights. The main supporting beams over the Church were precast concrete with quartz aggregate exposed by sandblasting.[7] As Rex Patrick explained, "The walls are solid, growing out of the ground, the polished concrete slab keeps everything stable and the roof is light, cantilevering out like canvas." [8]

The memorial garden and tower.

Rex Patrick saw the interior of the building as a large tent. "To cover this large ceiling area I thought the most suitable economic product I could use was plaster board and to play up the idea of a tent and to make it more interesting I put the seams or battens there. Plaster board was not suitable for the walls because it is a limited sound barrier and is easily damaged." [9]

The triangular shape used in the design of the tower and chapel conformed to the configuration of the site. Solid but slotted brick walls faced the highway to minimise the intrusion of traffic noise. The main entrance on the corner was without steps to facilitate entry of the elderly or parents with prams. The baptismal font was placed in the traditional position symbolising entry to church but still within one room for congregation participation. Nevertheless it was not in a position which detracted from the focus on the altar. The uncluttered sanctuary with its background of defused light, provided the setting for the altar, the focal point in the building. Suspended above the sanctuary was a wood carving of Christ in Glory (a Christos Rex) by Mrs L Mimovich.

The chapel, triangular in shape, was given its own identity with furnishings taken from the old church providing important links to the history of the parish. The standard candles were memorials, originally placed in the old church, to two young children, one of whom died during the Cheltenham typhoid epidemic of 1943.[10] Also placed in the chapel was a small silver communion set originally given by 44 residents ‘in or near Cheltenham’ to the Rev J H Gregory in 1859 in recognition of his ministry in the very early days of the district’s European settlement.

Besides its historical connections the chapel was designed as a setting for quiet contemplation, prayer and services for smaller congregations. At times of major religious celebrations, such as Christmas and Easter, the chapel was planned to provide overflow accommodation with the backs of the pews swivelling to allow the people seated there to be part of the main congregation.

On September 18, 1966 the completed church was dedicated by Archbishop Frank Woods. Thirteen years later when the church was free of debt it was consecrated by the Most Reverend Robert Dann, Archbishop of Melbourne and a former vicar of the parish.

In 1967 St Matthew’s was judged as one of the best ten buildings of the year constructed in Victoria. and was visited by the Governor of Victoria, Sir Rohan Delacombe. 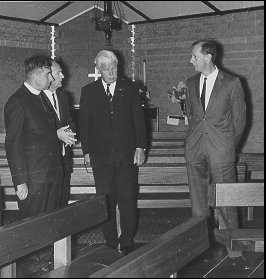 Governor of Victoria Sir Rohan Delacombe with the Rev George Lucas, vicar, Rex Patrick, architect, and the President of the Architects’ Association.