St Matthew's Church Cheltenham before the chancel additions were made, and showing bell tower behind the entrance porch

For centuries bells have been used to call people to prayer, to signify an important moment in a religious ceremony, to alert people to danger and to summons students to class. The practice of using bells was brought to the colonies in Australia by the new settlers who saw to it that their particular community was suitably equipped. These same bells were sometimes the centre of community discord, the focus of money raising campaigns and theft. Here are several stories from local communities. 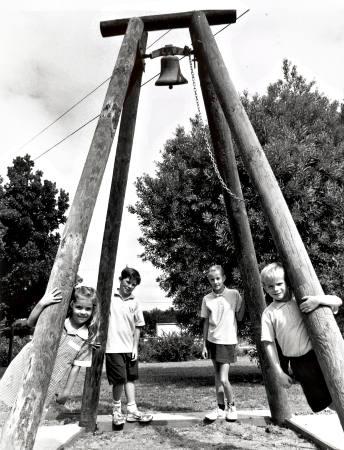 Some members of the Church of England congregation in Cheltenham approached their vicar, the Rev Samuel Taylor of St Andrew's Brighton, with the suggestion that money should be raised to erect a bell tower at their newly erected church. He approved, and James McKnight agreed to be responsible for the collection. One subscription list notes the names of fifty contributors who gave a total of £22‐9‐6 to the cause. 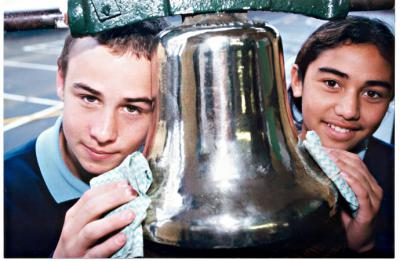 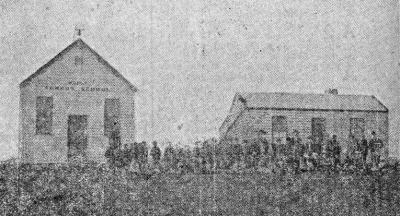 The bell tower erected behind the porch of the church continued to be used until 1966 when the new church was erected. The original bell that was purchased with the money contributed by fifty individuals did not last that long in its location as it was stolen in 1875 and not recovered.

A bell of the Heatherton Primary School experienced a similar fate. It too was stolen. The hundred-year-old bell was an important reminder of the original Kingston Common School, built in 1870 in response to the initiatives of local people including Thomas Attenborough, H Way, J Stooke, J Aitken and P Robertson. Members of the school community were distressed to find their bell missing from its position atop four strong wooden poles in front of their school buildings when school resumed after a weekend in September 1978. Word about the loss quickly spread around the Heatherton/Dingley district community. Peter Rogan, the school principal, pleaded with the thieves to return the bell as it was their last remaining memento of the original school in Old Dandenong Road. He described the bell as about 30 cm in diameter and painted a golden green.

The thief responded to Rogan's plea published in The Sun newspaper to return the bell. He said that it could be left anywhere in the school grounds. The next morning the thief/prankster left the bell on the school's nature strip with the message:

May this bell keep ringing day by day
From an old pupil that took it away.1

The bell at Mordialloc associated with the Church of England and the Common School was not stolen but its ownership was disputed. The Mordialloc Common School was established in 1868 in a wooden building 30ft x 16 feet with small porch situated on one acre of crown land. It was in this building that the local congregation of the Church of England met each Sunday from July 1868. Both the school and the church decided a bell was needed to announce the commencement of religious services and the beginning of the school day. Subscriptions were sought to raise the necessary £5 to make the purchase. 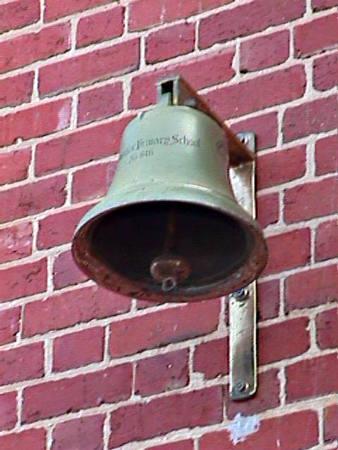 School bell on the wall of the Mordialloc Primary School.

In 1872 J H Potts the head teacher of the school was corresponding with the educational authorities about the dangerous state of the building caused by severe gales. He also complained of vandalism being done to school property by members of an evening singing class and by individuals attending church services on Sunday. Men were sitting on the top of the children's writing desks making them weak and shaky was the claim. Probably as a result of this complaint the church group decided to conduct their services in a tent provided by Mr Bloxsidge a local publican. There was no place in the tent for a bell.

When the congregation built their church on the crown grant adjacent to the school they requested that the bell be returned to them. Their right to the bell was challenged in 1880 by Thomas Gillespie and Donald McSwain who argued that members of the school community had contributed to the cost of the bell. Available documents showed that the church community had contributed £3 towards the cost but the source of the remaining £2 was initially unknown. Potts, the former head teacher of the school at the time when the bell was purchased, when contacted indicated that he had solicited donations for the purchase on the understanding that it was for a school bell.

In an effort to resolve the dispute whether it was a school bell or a church bell the Board of Education suggested that an inspector of schools should examine the bell and if it was in good condition purchase it for the school. As a consequence the church was offered £2‐15 ‐0 but the matter was not finalised. Four years later when the pupils were moving into a new school building the church congregation again pressed their claim to the bell, or the money previously offered. To support their case they presented a sworn affidavit that said the bell was bought to call their congregation to religious services. Because the contract for the new school building made provision for a school bell the original bell was passed to the church in March 1886.

Over the years Mentone has had bells in several locations, ringing out reminders or warnings. St Augustine's in Como Parade West is well over a century old and its church bell has always called the faithful to services during that time. Since Mentone's early days the fire brigade bell warned of fires needing the brigade members to get the fire engine on the move. These bells are small in size and also in decibels when compared with the Catholics' use of a bell to attract attention. Between 1957 and 1960 Father Frank O'Hanlon, parish priest of St Patrick's, Mentone, worked hard to build the new church&comama; one that would provide a ‘cathedral-like’ presence in the town. Rumour had it that the tower on St Pat's would be a few feet taller than Kilbreda's ‘coffee palace’ monumental landmark. Father O'Hanlon wanted a bell that would be heard far and wide, like those in medieval European towns that called people to worship. He eventually imported a large bell from Dublin, figuring that the Catholic Irish bellmakers would do the trick. It cost seven hundred pounds, a lot of money in 1960, and some parishioners were not so keen on this part of O'Hanlon's plan. Since then the bell has tolled at noon and again at 6 p.m., unless the co-opted bellringer forgets. Father O'Hanlon died in the 1970s, but he has left a daily reminder of his grand plans for St Patrick's because his bell certainly can be heard from a long way off.