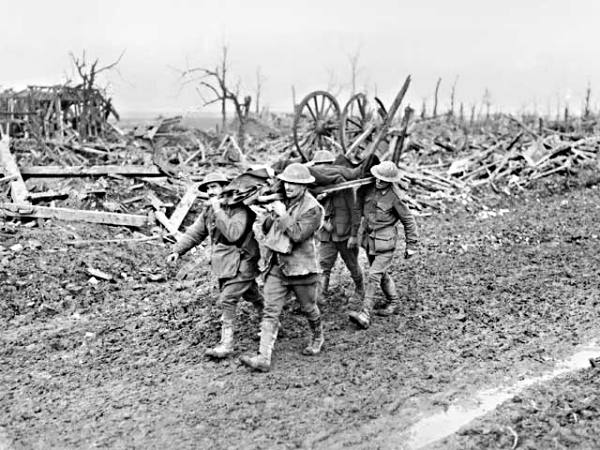 Stanley Lara Caffin was awarded the Military Medal on 31 October 1917 for bravery during World War One. His mother received a communication from the Army Record Office dated 21 May 1918 informing her of the award, enclosing a copy of the report published in the Third Supplement to the London Gazette. The statement related to conspicuous services rendered by a member of the Australian Imperial Force. The citation accompanying the award read:

For conspicuous bravery and devotion to duty. During the operations east of Ypres 4-6/10/17, he worked continuously for 48 hours stretcher bearing from the R.A.P. Over a very long and swampy relay at times under very heavy shell fire, he set a fine example of courage and endurance to the other members of his squad and assisted very materially in the evacuation of the wounded in particularly difficult circumstances.

Stanley Caffin was born in Brunswick in 1886, one year before his father took up the position of vicar of St Matthew’s with responsibility for the parochial district of Cheltenham. Stanley spent the early years of his life at Cheltenham and probably attended the local primary school. Where he received his early secondary education is unknown but a notice in a local newspaper at the time of his military award noted he was an old Grammar School boy; possibly Melbourne Grammar where his elder brother was a student and later a teacher. [1]

When he enlisted in the Australian army on 14 September 1914 war had been declared five weeks earlier by Britain, followed immediately by Australia. He gave his age as 25 years 2 months, his height was five feet six inches and his weight nine stone six pounds. His occupation was listed as clerk. Prior to enlistment he had four years’ experience with the cadets. His next of kin was given as Alice Caffin, his mother, who was living at Ulupai in Coppin Street, East Malvern. [2]

Stanley commenced training with the 14th Battalion before being transferred to the 1st Light Horse Field Ambulance because of poor eyesight. Initially he spent some time at the Broadmeadows Camp training. During this time he wrote to his father and described the conditions under which he and fellow soldiers were living. ‘After rain the water ran right through the centre of some tents, as the ground had been cultivated and consequently there were furrows which make regular gutters’, he wrote. He went on to say that the soil was black and the mud looked like and stuck like tar. When they took the horses to water, he said, they walked through mud up to the tops of their boots. This was a modest precursor to the conditions that Stanley and his mates would later experience in Flanders. [3]

While in camp at Broadmeadows Stanley and three comrades were sent to the Melbourne Hospital to experience some of the things they might expect on the battlefield as ambulance attendants. They witnessed the treatment of a range of injuries in the casualty room. In addition to this activity Stanley reported he was involved in unloading 250 carcasses of mutton from a lorry, carrying out horse and foot drills, and engaging in training that was aimed at building their strength and endurance to enable them to cope with the emergencies they would face in the field.

After completing the training at Broadmeadows Stanley Caffin, along with ten others as 1st Reinforcements to the 1st Light Horse Field Unit, sailed on 22 December 1914 on the HMAT Berrima for Egypt. He joined his unit at Heliopolis and later sailed for Gallipoli in May. There he went ashore and worked as a stretcher bearer. [4]

Many men were being evacuated from Gallipoli suffering from injuries and sickness. Stanley Caffin was drafted to do medical work on the SS Galeka which was a hospital transport taking wounded and sick to Lemnos Island. [5] On the 10 July 1915 he was again transferred. On this occasion the assignment was to the staff of the transport ship Port Lincoln. He sailed on this ship with wounded soldiers from Suez on the 3 August 1915 arriving in Melbourne a month later. [6] He returned to duty with the 3rd Military Division on the 18 November 1915. After the evacuation of ANZAC and British troops from Gallipoli he went to Serapium on the Canal’

Joining the 1st Field Ambulance at Tel al Kebir in January 1916 he sailed on the Invernia from Alexandria, disembarking at Marseilles, France, on 22 March 1916. By July and August the Australians were heavily involved on the Western Front. Caffin served there for three years in France and Belgium. During this time the Australian troops were engaged in fighting the Germans at Bullecourt, Messines and in the Ypres offensive which included the fighting at Polygon Wood and Passchendaele. Stanley Caffin was involved in the battle at Bullecourt but it was because of his work as a stretcher bearer at the battle of Passchendaele that he was awarded the Military Medal. On 4 October 1917 the move to capture Passchendaele commenced but it was not till 6 November 1917 that the campaign was successful. One reporter said the outstanding fact of the battle was the superb endurance and valour of the troops fighting under conditions which for horror and misery had scarcely been paralleled in war. [7] The battle marked the final stage of the third Battle of Ypres during which the total casualties suffered by the British were 218,688, Australians 38,719 and Canadians 12,414 a total of 371,763. [8] 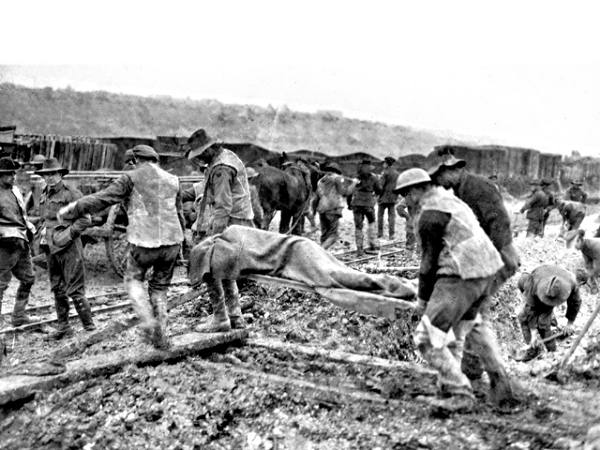 Prior to the Ypres campaign, in May 1917 Stanley Caffin, along with other members of his unit, was given leave to visit Paris. He spent nine days in the French capital before returning to the front. He was back in Paris in December for fourteen days rest after the horrific events at Passchendaele. Further leave was granted in late February and early March but this time to England. On 30 April 1919 he sailed from England on the Karagola returning home to Australia. Earlier he had another period of leave of twenty one days in Britain. He was discharged from the 3rd Military Division on 11 June 1919 and resumed his civilian status. [9] In total his service in the military was 1791 days of which 1634 were served abroad.

Stanley Caffin married Dorothy Danby at Christ Church St Kilda on 24 October 1923. His father, Alfred Caffin, conducted the ceremony. A girl was born to Dorothy and Stanley on 17 June 1929 at the Windermere private hospital. Forty eight years after his discharge from the military in 1919 Stanley was writing to the officer in Charge of Central Army Records applying for Anzac Tokens and recounting his army history. At the time he was living at 43 Allenby Avenue, East Malvern, and was a member of the East Malvern RSL. [10] He was awarded, in addition to the Military Medal, the 1914/15 Star, the British War Medal and the Victory Medal. He died on 15 October 1979 and was cremated at the Springvale Botanical Cemetery three days later.