George Thomas, the eldest child of George and Amelia Whitehead, died as a result of a boating accident in Western Port Bay on 31 December 1889. A magisterial inquiry concluded that his death was due to accidental drowning. He was buried in the Cheltenham Pioneer Cemetery on 3 January and according to cemetery records he is the sole occupant of the grave. The headstone has the inscription ‘erected by his loving brother Albert’ and the grave is surrounded by a small wrought iron fence. 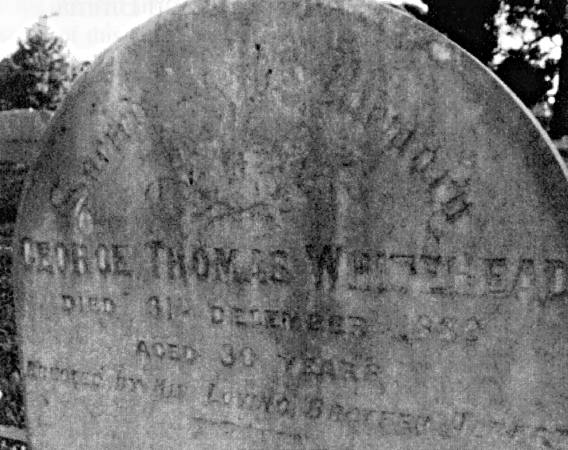 A report in the Mornington Star, 4 January 1890, details the fatal accident which occurred two miles from the Hastings jetty. ‘It appears that the boat Albert had been entered for the regatta that took place on New Year’s Day … About 5 o’clock in the evening Mr G T Whitehead, his brother A E Whitehead, S Orsino and G Sheay, entered the boat for the purpose of making a trial sail. All went well until they passed the outer beacon, when a squall of wind struck the boat, and although the sheets were at once let go, the main sheet did not render, causing her to heel over to leeward, and the ballast at the same time lurching to the same side, she immediately filled and sank, leaving the occupants struggling in the water. At this juncture Mr J Napoli’s boat the Ozone, which he was sailing in the immediate neighbourhood, bore down to their relief. Unfortunately the brothers Whitehead were unable to swim. Mr Sheay and Mr Orsino during this time displayed the greatest coolness and presence of mind. Feeling the boat sinking beneath them they immediately released their hold, thinking by this means to give it a chance of righting itself. Mr Sheay’s legs became entangled with the cordage, and he was actually being drawn down with the sinking boat, but fortunately he was able to extricate himself and swim for Napoli’s boat. Mr S Orsino, seeing the condition of the brothers, who by this time were in an exhausted condition, swam to their assistance. At one time both men caught hold of Orsino, and he had the greatest difficulty to extricate himself. He then dived, and rising beneath A E Whitehead, managed to support him until they were picked up by Napoli’s boat. In the meantime Geo. Whitehead sank, and rose no more.’

The fatal accident occurred the day before the Hastings New Year’s Day regatta, a local community celebration. George’s death, according to the correspondent of the Mornington Journal [1] …had a depressing effect on the community generally and which raised the question whether the sports should be postponed.’ They weren’t. The Mornington Journal correspondent concluded his report on Hastings by returning to the boating accident noting, ‘… that upon the occurrence being reported to Constable McCaig he at once engaged a boat and proceeded with Mr Knox, who is well acquainted with the bay, to make a search for the body. This prompt action on the part of Constable McCraig was very gratifying to the relatives and friends of the deceased, who were fearful that as the accident took place in deep water the body would never be found. The corpse was subsequently removed to the railway station, followed by a large concourse of mourners, and from thence by rail to Cheltenham, the residence of the family, and was there interred amid great sorrow at the accidental bereavement.’ 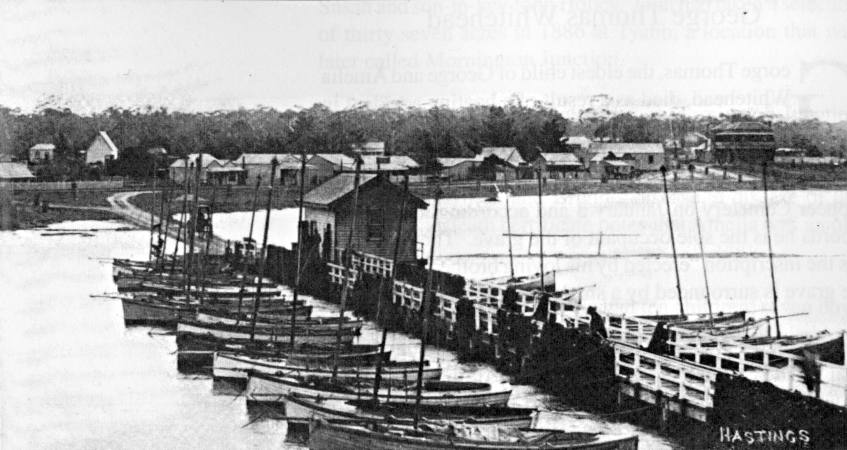 George Thomas, a fisherman, was thirty-one at the time of his death, and unmarried. He was born on 23 April 1858 at Boroondara when his mother was twenty one years old. He moved with his parents to Heidelberg and Prahran but by 1864 was living in Cheltenham. Like his brother Albert, he probably attended the Beaumaris Common School for several years. By 1871 George’s father had taken up a three hundred acre allotment on the Carrum Swamp. No doubt George Thomas as a thirteen year old was required to assist his father in the attempt to enclose the allotment with a substantial fence, clear and plough twenty six acres, plant fruit trees and develop a vegetable garden. As well as construct a three room cottage made of wood, stone and brick.

By 1878 the Whitehead family had left the Carrum Swamp returning to Cheltenham. Shortly after this time George Thomas and brother Albert became residents of Hastings, working as fisherman. In 1889 the shire rate book indicates that George Thomas was the owner of four town lots at Hastings . The lots were numbers 126, 127, 166 and 167. The rate book noted that George Thomas was a fisherman and was dead. The annual value of the land was eight pounds and the rates owed were carried forward as arrears. By 1890 George Thomas’s brother, Albert, was listed as owner.