Heatherton Football Club played in the Federal League from 1913 when the club was formed. The oval in Ross Street was the team’s home ground. In the early 1950s the club disbanded after having difficulty in fielding a team. After a few years, in 1957, the Heatherton Oval hosted a team again. Initially it was not called ‘Heatherton’ but eventually it was absorbed into the district that welcomed its continuation of football at the old venue and, much later, it became a re-born Heatherton Football Club that currently plays in the Southern League. 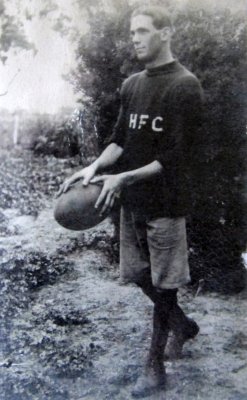 The team that came to Ross Street in 1957 was Mentone CYMS (Catholic Young Men’s Society). This group fielded cricket and football teams before and after World War 2. The teams were drawn mainly from members of the St Patrick’s Mentone parish, but there were always several ring-ins who came from all sorts of places and backgrounds. In the 1950s Mentone CYMS played football and cricket at Dolamore Oval, then a rough grass oval between First and Second Streets near Warrigal Road and Nepean Hwy (It is now an athletics venue). In 1952 the team had quite a few older players who had been around the CYMS since the late 1930s. These included Ignatius Weekes, Tom Wain, Frank Flood, Jack Kelly and Ken McGrory. The team fell on hard times in 1953 as these players retired. There were not enough young men in Mentone parish who were interested in playing CYMS football, as Mentone Federal League footy club and a newly formed YCW team attracted anybody with a bit of talent. Mentone CY team was thrashed in most games. In 1954 Tony Cerato, an ex-country club player, was appointed coach in the year that I joined the club, having left school and started a Melbourne Uni course. There was a slight improvement in Mentone CY footy, as several other ex-St Bede’s players came into the team that won a few games. In 1955 the Ryan brothers (Ian and Gerry) recruited other locals, including Ray and Laurie O’Toole, and John Kent who was trying out for Fitzroy VFL side and played some games in their reserves team. I was elected captain-coach, as no one else was interested despite a scouring of the district for a retired footballer with talent and enthusiasm. 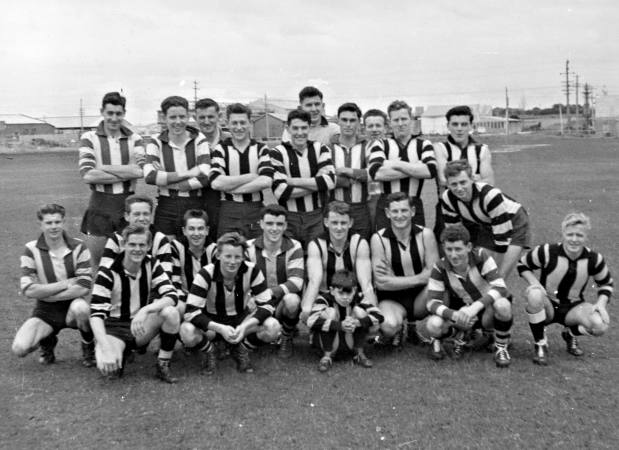 I knew little about how to coach so I used physical education exercises to get fitness into the team members. For a while this early evening training was done in the dark at Dolamore Oval where there were no lights. Later on the Ryans pleaded with Mentone Football Club and the Council to let us train under floodlights at Mentone Oval on Wednesday nights. Surprisingly, with these changes and a few talented recruits, we began to win games and stayed near the top of the ladder. Eventually, with ten wins and six losses we made the finals. In the First Semi-final at Murrumbeena we played a draw against Sandringham on a wind-swept ground that made scoring at the northern end impossible. Leading by about three goals at the last change we stacked the backline and held them out until the bell rang with scores level. The replay at Black Rock the next week was another nail-biter, but we lost by just 4 points. I was pleased to have been coach of the team that made the finals for the first time in many years.

In 1956. the Ryans, then our only administrators, secured the interest of Bert Lucas, a local resident and an ex-South Melbourne VFL player from the 1940s. His coaching was a clever mix of skills training and encouraging banter that worked wonders. Players began to warm to him and the team continued to perform well. We made the finals again but lost to Oakleigh at the Ormond Amateurs ground. East Camberwell became our nemesis, beating us twice and going on to win the flag.

The 1957 year was destined to be very different from the previous few.

After the Melbourne Olympic Games the red cinders athletics track was shifted to Dolamore Oval where meetings of many athletic clubs began to take place after the track was laid during 1957. Obviously Mentone CYMS football team had to play somewhere else. We discovered that Heatherton Oval at Ross Street off Centre Dandenong Road was the only available ground locally. It was vacant because Freighters-Heatherton had folded. Heatherton F.C. had begun in 1913 and had played in the Federal League on and off since that time. Boosted by support from the local trucking company, Freighters Trailers Ltd, it survived during the 1940s but disbanded in the early 1950s. Freighters played on the Heatherton Oval and this became vacant as the club folded. Once again the Gerry and Ian Ryan negotiated a deal which allowed us to move there from the start of the 1957 season. The changing rooms were run down and there were very poor lights for training so this took place mostly in darkness..

At the time our club was run on a shoe-string with informal management. Gerry and Ian Ryan did most of the administrative work, and it was to their credit that we found the Heatherton venue and continued to function. Actually the move to Heatherton seemed to lift our performance. It was wide and spacious, unlike the small Dolamore ground. We were a young team and had some pacy players who thrived at Ross Street. Bert Lucas as coach became very effective, as players now respected his VFL knowledge and great personality. The team won nearly all games in 1957 to finish on top. A comfortable win against Oakleigh in the 2nd Semi put us into the GF. Oakleigh won through to the GF and it was played at Mordialloc Oval. That match was a near disaster for us. Our fortnight rest had caused complacency and Oakleigh ran rings around us for three quarters but kicked point after point on a windy day. They led by only a couple of goals at three quarter time and we had the wind. They packed the backline and we made slow progress. With a few minutes left we were still one goal down after Ian Ryan soccered a goal. From a scrimmage in the goalsquare the ball fell into my hands and I booted a low kick that went through. Scores were level. Minutes later the ball came high to the forward pocket and I marked in front of Laurie O’Toole on an acute angle. I put a torpedo through for a point. The ball was kicked into play, the bell rang and we won by a point!! 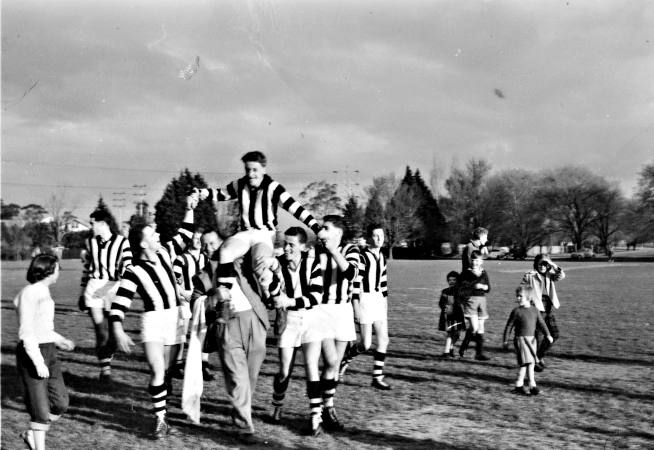 Leo Gamble , captain of Mentone CYMS team being ‘chaired’ off after semi-final win in 1957. Two weeks later the team were premiers after the Grand Final at Mordialloc. Courtesy Leo Gamble, Kingston Collection.

A happy party at John Alford’s home near Dolamore Oval finished our season. There was no presentation night; surprisingly in retrospect.

In 1958 some players left the club and the team struggled. A loss in the first semi-final meant finishing fourth.

Around 1959-60 the team fielded a Second 18 which was under-manned and took some big beatings. Peter Schiller was captain of this side. In 1961-3, under several short-term coaches, the second 18 was discontinued and the team struggled. It did not make the finals but Bert returned in 1964 and another flag resulted. I was not in the club that year so I have no record of the results.

In 1965-6 the team did very well with Bert coaching well and enthusing players to greater efforts. He seemed to love the challenge and the side reacted positively. In 1965 Mentone won nearly all games and finished first or second. West Heidelberg were the big rivals but we beat them comfortably in the GF, played at Caulfield.

Team members included: Peter Curwood (c) John Curwood, David Nelson. Leo Gamble, Terry Shannon, John Norton, Damien Bayard, John Cameron, Denis Bell, Graham Weston, Peter Mc Carthy, Chris Long, John Buxton, Michael Buxton, Daryl McAlpine and Tony Grundy, as well as a young John Chapman who was to be a club stalwart later on. In 1966 Mentone again finished near the top but West Heidelberg were much stronger and defeated us by a couple of goals at Caulfield, after we had to win through from the preliminary final. The team members were similar to those of the year before.

My football days at Mentone CYMS finished after that season. The team went on to great success over the next few years but that is another story.