George and Catherine Scantlebury arrived in Cheltenham from the goldfield's town of Linton, near Ballarat, in 1889. Before their marriage George, who had been born and educated in Ballarat before studying medicine, was the town's doctor and Catherine, Linton's Post Mistress. Twins were born to the couple but only the baby girl, Vera, survived. The family moved to the growing bay side area of Cheltenham and built their home, Marathon, on a small property bounded by Charman Road, Coape and Mackenzie Streets. The land was part of the Charman Estate and the house, now called Shalimar, still stands ‐ ‘one of the few nineteenth century houses surviving in Cheltenham’ and ‘a good example of the nineteenth century boom style’.1 In 1890, Cheltenham's population was barely half that of Linton, but Cheltenham was a busy fruit growing and market gardening centre with a new railway line and was relatively close to Melbourne's growing metropolis.2 The family grew to include George Clifford (Cliff) born on the last day of 1890, Dorothy (Dot) in 1893 and Ethel. 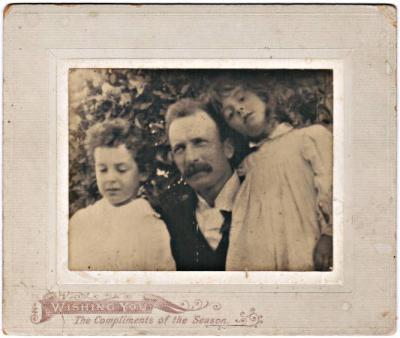 George Scantlebury with Clifford and Vera.

Dr George Scantlebury listed his occupation as surgeon on Vera's birth certificate but his practice was such that today we would call him a general practitioner. George's obtained his medical degree from the University of Edinburgh's Medical School and an inheritance provided the funds to build their new home ‘with all modern improvements such as eleteric (sic.) bells, gas, water supply’.3

Unusually for the times, he was interested in psychiatry and intellectual disability and sometimes cared for five or six of these patients at a time in the Scantlebury home.4 Marathon encompassed a family home, a medical practice and a small private hospital registered in Catherine's name.5 Their daughter Vera's journal- style letters, written twenty-seven years later during WWI, create a strong sense of a busy and lively household. Family, friends, colleagues and patients, all moved in and out of the home constantly and the dining room was the centre of the house. The family, guests and sometimes hospital patients ate together at the long dining table with Catherine presiding and keeping the atmosphere bright and lively.6 The household was a caring and inclusive one.

Linton's Post Office was opposite George's medical rooms which took up one half of Barr's Drapery Store building, in the town's main street.7 She was the daughter of a not particularly successful solicitor, the second youngest of twelve children and she needed to earn a living.8 In her study of women in the Victorian Post Office, Claire McCuskey has written that although women earned considerably less than men, £60 to £180 per year as compared to £160 to £485, career prospects for women were good.9Catherine was a city girl who accepted a country posting and the rigors of living independently as a single woman to improve her career prospects and income.10 The job came with a rent-free residence and provided a semblance of middle-class respectability. Linton's Post Office was also a Telegraphic Office and Savings Bank and as the holder of monies Catherine kept a small pistol beneath the counter.11 It is thought that she once pointed the gun at a likely robber, but never needed to fire a shot.12

Catherine was twenty-three years old when she met twenty-eight year old George and by marrying she broke an occupational convention. Very few Post Mistresses ever married.13 Catherine had used her limited education to obtain a position that for women was relatively well paid and independent. She was ambitious and determined in her desire for all of her children to complete a full education and not to be burdened with household chores and familial burdens. Her concern for her children's education ensured that each child was offered a complete education although it is not known where the children attended primary school.

So unlike many middle-class families, there was no question that the Scantlebury girls were expected to complete secondary education. In the early years of the twentieth century, the family's choice of a secondary school for their three daughters was limited to private girl's schools. The Melbourne Continuation School, Victoria's first government secondary school did not open until 1905. The Scantlebury's enrolled their eldest daughter Vera as a weekly boarder in Toorak College in 1900 and she became Head Girl in both 1905 and 1906. Vera's sister Dorothy would follow her to Toorak in 1905 and the youngest sister Eileen in 1911. Cliff attended Mentone College and Geelong Grammar. He boarded at Trinity College whilst studying at the University of Melbourne as did the three Scantlebury girls who lived-in at Trinity's women's hostel Janet Clarke Hall. The four Scantlebury children all completed a University of Melbourne degree, Vera and Cliff in medicine and Dot and Eileen in arts. Education was given a very strong place in the Scantlebury home as was the assumption that the children would lead independent and professional lives.

From the 1890's the family was vitally involved in the early development of community and social organisations in the new and growing suburbs of Cheltenham and Mentone. The importance of local community and the responsibility of the individual to contribute were made apparent to the children by the family's activities. The Scantleburys and particularly father George, appear many times in accounts of local Cheltenham history. Dr Scantlebury was District Medical Officer (MO) during WWI and then during the Spanish Influenza epidemic in 1919 when the Health Act required all municipalities to appoint a Municipal MO&peiod;14 He was also a JP. George was Honorary MO for the Methodist Homes for Children to whom he displayed his loyalty when he refused to agree with some local residents who suggested that the Home's children should be removed from local schools because of their propensity for infection.15 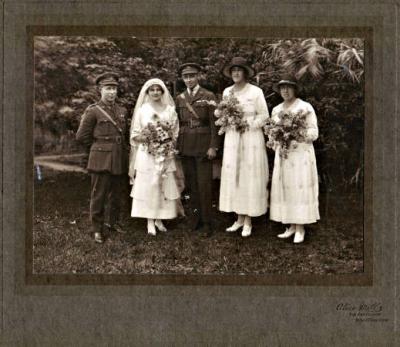 The Scantleburys were a sociable gregarious family. George liked a game of cards, a day at the races and he loved his cars. He was Club Surgeon at the Aspendale Park Racing Club and played cards weekly with the Manager of the English, Scottish and Australian (ES&A) Bank and with prominent local, Frank Le Page, the Mayor of Moorabbin.16 George and his friends were constantly active in community affairs in their new suburb and he was President of the Cheltenham Progress Association.17 He involved himself in the foundation of the Mentone Football and Cheltenham Bowls Clubs, appearing regularly in the sporting pages of The Argus as ‘Scantlebury, the well-known Cheltenham player’ for his bowls club and as a state representative.18 George was a member of St Matthew's Anglican Church vestry and the family was involved in church activities, concerts at the local recreation reserve and as members of the Cheltenham Tennis Club as well as having their own tennis court at Marathon.19 Historian John Cribbin has commented that George was well considered in the district and known for purchasing Cheltenham's first motor vehicle in 1903, registration number 127.20 The family was also early in its use of the telephone, their number in the 1914 directory being One.21 Catherine is said to have been the first woman to drive a motorcar around Melbourne and George taught all the children to drive as well as basic auto mechanics.22

During WWI the family demonstrated strong support for Australia's contribution to the war effort as a loyal member state of the Empire. George and Catherine's twenty-four year old son Dr Cliff Scantlebury enlisted in April 1915 as one of Kitchener's One Hundred ‐ an appeal from Lord Kitchener for more colonial doctors as reinforcements needed urgently for the Royal Army Medical Corps (RAMC).23 Cliff served as a Regimental Medical Officer for four years on the battlefields of France, after the war gaining a Fellowship of the Royal College of Surgeons in Edinburgh and finally returning to Marathon in 1922, seven years after his departure. He became an Ear Nose and Throat specialist at the Royal Melbourne Hospital and was the inaugural President of the Otolaryngological Society in 1950.24

Dr Vera Scantlebury waved goodbye to her family and friends at Port Melbourne pier from the deck of the RMS Morea, on February 14, 1917. She had been appointed as a Lieutenant to the Endell Street Military Hospital in London run by the Women's Hospital Corps which had been created by Dr Louisa Garrett Anderson and Dr Flora Murray in the first weeks of the War. Vera spent two years as a surgeon in the operating theatres of the 560 bed hospital carrying out a wide range of surgical and medical procedures for wounded soldiers. After the war she would develop a stellar career in maternal and child health and be appointed as the first woman to head a Victorian government department when she became the pioneer Director of Infant Welfare in 1926.25 Vera's vision for the development of universal, non-sectarian and free baby health centres and kindergartens remains at the heart of Victoria's maternal and child health system today. 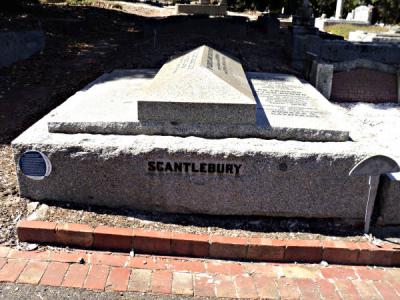 The Scantlebury family grave at the Cheltenham Pioneer Cemetery.

At home, the Scantlebury family helped to organize fund raising activities for the Wounded Soldiers Fund, Catherine presided over the Cheltenham branch of the Red Cross Society and was Vice President of the local branch of the Australian Women's National League ‐ both organizations being involved in working for the war effort.26 George provided first aid courses and was Chair of the local Win the War Committee which ran patriotic fund raising meetings in Cheltenham's Mechanics Institute.27 As with so many families, four years of war meant that the Scantlebury family never again lived together at Marathon as they had in 1914. Cliff was away from home for seven years and Vera for two. In 1919, Dot, who lost her fiancé Bob Bage, killed at Gallipoli in April 1915, was teaching at Clyde school Mt Macedon. She would become Principal of Toorak College in 1942 ‐ the Scantlebury girls ‘old school’.28 The youngest Scantlebury, Eileen, completed her Arts degree in late 1919 and in December married Dr Charles Kellaway who in 1923 became the Director of the Walter & Eliza Hall Institute and later the Wellcome Foundation in London.

George Scantlebury died suddenly at home on September 28, 1923 aged sixty three years. Vera wrote that in Cheltenham, her father's patients were devastated and her own grief was exacerbated by the fact that her mother Catherine and sisters Dot and Eileen were all away in London. Marathon and George's medical practice were sold soon after. The family matriarch Catherine died on August 29, 1941 at Shalimar which was actually the family's house Marathon in a different guise and with different ownership as a nursing home. The Scantlebury Brown grave in Cheltenham's Pioneer Cemetery has been beautifully restored through the determined work of the Friends of the Cheltenham & Regional Cemeteries and is marked with a bright blue historic marker commemorating the achievements of Dr Vera Scantlebury Brown.

The Scantlebury family lived in the heart of Cheltenham from 1889 to 1923 and was integrally involved in the early development of many of its social institutions. Their involvement in the local church and in sporting and recreation activities spoke of their sociability and their acceptance of the value of contributing to their community. It is appropriate that they lay buried only metres away from Marathon, the house that George and Catherine built.