Centenary of the Great War

When the twentieth century began, Great Britain and Germany were the two most powerful nations in Europe and both possessed large empires outside Europe itself. Germany's growth had challenged Britain's pre-eminent world leadership and there was a growing tension between leaders of these two countries. After 1900 the suspicion and distrust grew, with Kaiser Wilhelm 2 becoming a provocative rival of Britain's royal family despite being a family relative. He, along with his military advisors, set out to challenge the British Government by offering support to antagonists of the British. It was felt that a war was imminent when Archduke Franz Ferdinand of Austria-Hungary was assassinated at Sarajevo on 28th June 1914 by Princep, a Yugoslavian nationalist. Germany called its central European allies into military action against Serbia as punishment for the murder that had occurred within Serbia's borders, and its refusal to meet Germany's demands for retribution. England, with a foreign policy over previous decades of maintaining the ‘balance of power’, so that no European country was dominant, deemed the conflict in the Balkans a threat to this balance. The emerging German-Austrian-Hungarian alliance appeared to be intent on expansion so Britain was ready to curb its influence. When the Germans marched into the Low Countries, ignoring Belgium's neutrality, and then invaded northern France, Britain declared war on Germany, allying itself with the French. 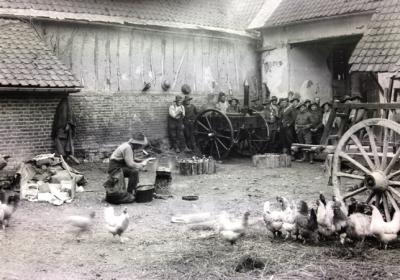 The Allies and the Germans soon faced each other along lines of trenches across the north of France and Belgium where a stalemate developed with neither side able to push the other back. Britain and its allies eventually committed hundreds of thousands of troops to this trench warfare and so did the German side. For the next four years millions of the combatants lost their lives in what was termed the ‘war to end all wars’. The carnage was perhaps the most severe in human history as new ways were designed to kill the enemy. Artillery bombardments buried men alive, flamethrowers incinerated opponents, strategically-buried ordnance blew trench occupants into oblivion and aircraft became warplanes to administer death from the skies. Generals, safe in rearguard emplacements, sent tens of thousands of young men to their fate. Troops had to ‘go over the top’, which meant leaping out of their trenches in bayonet charges where large numbers were cut down by rifle and machine gun bullets. Even those who survived often suffered trauma that destroyed their lives when they returned home.

There were no winners. Neither side could prevail, until in November 1918 an armistice was declared. The peace process was flawed. The Allies insisted on Germany making huge reparations that destroyed its economy and indirectly led to the rise of Hitler. So the ‘war to end wars’ was certainly not well named.

Australia, as part of the British Empire, sent troops to this massive conflict, their battles with the Turkish allies of Germany becoming famous after the Gallipoli episode. Defeat there led to the eventual assignment of the Australian forces to France. There the Diggers became part of the trench warfare and were known as tough fighting men. Their casualty rate as a percentage of soldiers engaged was well above Britain's and most other countries in that war. Australia lost over 60,000 people in the Great War, overwhelmingly young men. The small towns that were located in the district now called Kingston contributed hundreds to the military services, many never to return from Europe. Local market gardeners and others donated generously to the cause, with fruit, eggs, vegetables and dairy products given to the army organisers, training the men at Broadmeadows and elsewhere. 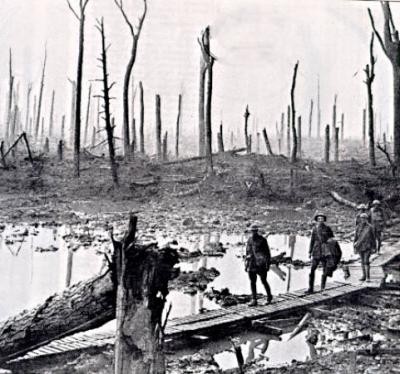 Patriotic committees were formed to raise money to purchase goods and to send them to the troops overseas. Cr Groves, at a patriotic concert held in Aspendale, commented favourably on the singing of patriotic songs but said more was required. He told the audience that they must provide comforts for the men going to the front where they would be fighting in trenches full of water. The boys of Mordialloc State School raised sufficient money to purchase material for five hundred handkerchiefs for use by soldiers. The girls of the school volunteered to make them. One hundred and three Red Cross volunteers made sixty-six pairs of pyjamas, ten flannel shirts, thirty-six pairs of socks and twenty face washers in July 1915 to be sent to France.

As the slaughter in France stretched into years the enthusiasm for war waned, and people began to long for it to finish. Recruitment fell away, as many men who remained in Australia could not see an end to it all and realised more fully the ghastly truth of modern warfare. The Government wanted to boost army reserves and replace those who had been killed. In 1917 there came a strong drive by Prime Minister Billy Hughes to recruit more volunteers for the AIF. By then the reality of modern warfare had reduced the enthusiasm for enlisting in the services, so Hughes tried to introduce Conscription. Two referenda on this issue were not successful, the ‘No’ vote being boosted by anti-Conscription Catholic Archbishop, Daniel Mannix.

Besides Mannix, others received harsh criticism for being unpatriotic. The AIF was a volunteer army, and the expectation was that all young men who were fit would join up and fight ‘The Hun’. Of course many men did not volunteer for all sorts of reasons, including health issues that were not obvious to casual observers. Many of these men who did not volunteer received white feathers, symbols of cowardice, often from women whose men were in France. It was a period of suspicion and bitterness. One recruiting advertisement had a little girl saying to her father, ‘What did you do in the Great War, Daddy?’

Locally, many people in the suburbs that now make up Kingston tried to outdo each other in patriotism. Hatred of anything German was palpable. One local man was reported to have destroyed his fine piano, simply because it was made in Germany. In Naples Road, Mentone, a man called Oscar Wetzell, who had Swedish ancestors and a strong accent, had rocks thrown at his home by young males, causing much damage to the walls. He eventually asked to be interned with other foreign nationals such was the bigotry levelled at him. He had a small telescope which he used to watch ships coming up the bay and some locals said he was a German spy. Earlier, he had even allowed visitors to peep out to sea through his telescope for a penny a time. Intense patriotism and hatred of the enemy was not always accompanied by rational thinking. 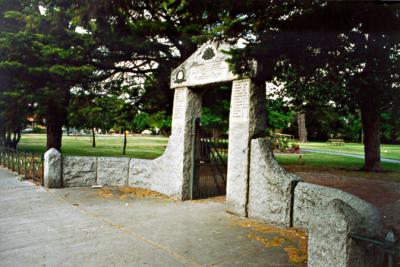 Memorial gate recording men who served and died in WW1. Site of the Anzac service.

The Great War took the lives of millions, mostly in Europe. In Australia, then with a population of about five million, the loss of 60,000 young men was felt for decades. Nearly every family had some member who had been to the war or had been affected by its horror in some way. During the 1920s and 1930s many young women could not marry such was the reduction in young male numbers. Many families had ex-soldiers who returned with terrible injuries that affected the rest of their lives. Others returned with mental problems that led to nervous breakdowns. The Great War carved a huge scar in Australia's social life, often causing great bitterness. During the 1920s ex-service organisations were set up, but many returned men felt they received little reward for their war service. Many could not get jobs, there was not enough done to re-establish them in business, and trauma counselling was virtually unknown. But the war was certainly remembered. The creation of monuments all over Australia saw to that.

Nearly every town or suburb erected a war memorial to honour the sacrifices made by the servicemen it listed. The suburbs that now make up the City of Kingston were no exception. In the early 1920s war memorials went up in the towns along the Frankston line and into the hinterland out towards Heatherton and Clayton. Over eighty years on, these are still the venues for services each Anzac Day and each Remembrance Day.

This article provides a reminder of the extent to which World War One affected local people who in that era learned that war brings brutality and horrific behaviour, as well as incredible human courage. It is a century since the Great War began. Let us hope no such disaster occurs in the centuries to come.