When the separate colonies in Australia agreed in 1901 to federate to form the Commonwealth of Australia, responsibility for the defence of the country and management of its military forces became a task for the newly-formed national government. Defence was a major issue, with growing security concerns. Australia, a large land mass, was populated by a small number of people primarily distributed along the eastern sea board, with a railway system that was fragmented. The new nation was dependent on the British navy yet at that time the country had read about Japan's startling and decisive victory over the Russian navy and was aware of the acceleration of German naval constructions to rival British dominance of the seas. 1

The new federal government, meeting in Melbourne, passed a series of Acts empowering the Australian Government to call up unexempt males in time of war while specifying that military units could not serve outside Australia. The 1909 Defence Bill went further in that it made training and service compulsory in a time of peace. The underlying principle was that every citizen should be trained to defend his country. The Bill had broad parliamentary support. The first scheme of universal training came into operation on 1 January 1911.

In 1909 the Australian Government invited Field Marshall Viscount Kitchener to visit and inspect the existing military forces and to provide advice on how they might be improved. After visiting military camps around Australia, and drawing upon his knowledge of the contribution of Australian soldiers involved in the South African War, Kitchener acknowledged the quality and the keenness of the young men involved in military service. However, he claimed quality and keenness would be insufficient if these men had to face thoroughly trained regular troops. Success, he suggested, could only be achieved after a thorough elementary grounding. He concluded that

The present forces are inadequate in numbers, training, organisation and munitions of war to defend Australia. 2

In his report Kitchener recommended compulsory military training for all males from 12 to 25 years of age. Boys from 12 to 14 years, known as junior cadets, would be required by law to undertake 120 hours per year. Those aged 14 to 18 years, senior cadets, should serve the equivalent of 16 days, training, Those males 18 to 19 years old, classified as recruits, were to serve 16 days, 8 of which were to be in camp. Men 19 to 20 years, seen to be trained soldiers, should complete 16 days, 8 of which were to be in camp. For 20 to 25 year olds the training recommendation was an annual 6 day camp. 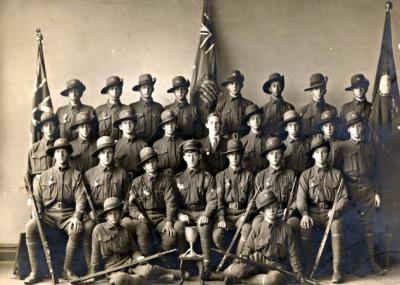 Junior cadets were not required to wear uniforms and the training could take place in a school with a teacher who was accredited by a military officer. Senior cadets were to wear the prescribed uniform and be trained in elementary military exercises, in musketry on open ranges up to distances of five hundred yards and be organised in military units.

Provision was made for exemption from service in the case of those who were the sole or main support of their families, such as the only or eldest son of a widow or of a man who was incapable of earning a livelihood for those dependent upon him. Criminals were to be excluded from the citizen force. Kitchener emphasised that the State should get the best men available. A newspaper reporter commented,

the amount of drill required will not involve any considerable hardship, and in the event of war there are few if any able-bodied men who would desire to stand by inactive while an enemy invaded our shores. In any case the safety of Australia is the supreme consideration. 3

Where any question arose as to whether a person was exempt from training, the burden of proving the exemption rested on the person claiming exemption, and applications for exemption were decided by the courts. There were a number of cases presented to the courts in Victoria and other States by army authorities to address the problem of ‘shirkers’ the term that became equivalent to ‘cowards’.

One newspaper in January 1913 reported a large batch of summonses was being prepared to deal with drill shirkers. The prosecuting officers were instructed to ask magistrates for orders of 10 days drill in addition to the shortage in each case, whereas the Act made provision for a maximum penalty of 20 days additional drill. Those lads found deficient in the number of hours of drill completed were to be conveyed to a barracks where the order of the court was applied. During their stay in the barracks rations similar to those granted to the Permanent Forces were to be issued to the youths.

The Argus of 3 March 1913 reported that three drill shirkers had arrived at the Queenscliff fort to undergo varying terms of detention. There they were confined in a roped off enclosure out of which they were not allowed to stray. They were well fed but tobacco or cigarettes were forbidden. Throughout the day non-commissioned officers of the Royal Australian Artillery drilled the boys commencing at 6 a.m. However, as the Defence Act made no reference to compulsory attendance at church services, some lads took advantage of this omission and avoided church parades. 4

A police magistrate at Geelong warned senior cadets that the Commonwealth would not employ anyone in the Public Service who had not completed his drill and in his view no State or private firm is likely to employ a person who has shirked his drill as a ‘shirker’ cannot be relied upon. 5

The issue of shirkers came to a head in a Brighton Court case involving Tom Roberts, a local lad. Roberts failed to appear before the Police Magistrate at Brighton when summoned. His mother said he was ill in bed and could not attend court so the case was adjourned for five weeks. It was explained to the court that the Roberts' family were Quakers and the father would not let his son undertake the training required of a senior cadet. The police magistrate, Mr Cohen, advised that religious convictions did not exempt any boy from drilling, while pointing out that because a boy has to drill does not mean he has to fight. He warned the father not to return to the court in five weeks' time with that excuse. 6

Five weeks later sixteen year old Tom Roberts appeared in court to answer charges of not attending compulsory drill parades. He pleaded not guilty. His father entered the witness box, but being a Quaker, refused to take the oath. Mr Roberts said he was responsible for his son not attending drill and as a father he demanded obedience which was

his lawful and God-given right.

His son was God-fearing and obedient to his parents. The mother said it was the parents that should be punished not her son. The magistrate responded by sending the son to the Queenscliff fortress for 21 days pointing out it was not possible to punish the parents. 7

A month later Mr Roberts was writing to the editor of the Brighton Southern Cross appealing to readers to use their influence to protect Australian lads from unjust treatment by the Department of Defence. Tom, his son, continued to refuse to take part in drill activities and had subsequently appeared before a military court where he was ordered to be placed in a cell for seven days. There Tom, according to his father, had a wooden stretcher, mattress and blankets were taken away in the morning and not brought back until dark, he was only allowed a trifling amount of exercise, given a low diet and was not allowed to read nor write to his parents. Tom's father was astounded at such treatment and urged

all liberty-loving Australians to write strong protest letters to the press, the Prime Minister and members of parliament, asking for the abolition of court martials in time of peace, and of solitary confinement under the Defence Act.>/p>

The Defence Department informed Mr Roberts that if his son continued to refuse to comply with directions he would be ordered a further period of solitary confinement. 8

When the Brighton Court reconvened a month later Lieutenant Hanby, the officer who conducted the prosecution of Tom Roberts announced that the Minister of Defence (Senator Millen) had instructed him to have the case against Tom Roberts struck out. This the bench of the court did. No reason was advanced for the Minister's direction but the case had been raised in the Senate of the Federal Parliament. Lieutenant Hanby mentioned that Roberts had not put in any drill for the year ending June 30.

When the First World War broke out it affected military training but cadet training continued, although there was no conscription for overseas service. It was in June 1922 that the system of training for junior cadets was abolished and the universal military training and holding of military camps was suspended from 1 November 1929 pending a review.