Margaret and Naja Janssen in the garden at Nessway, Barry Street Mentone.

In 1915, Inuk Pavia Janssen, a Scandinavian from Greenland who had lived and worked in Australia as a miner in Ballarat and Kalgoorlie before settling in Mentone, was waiting for news of his sons. Carl Wilhelm Janssen and Ernek Valdemar Janssen had enlisted just days after the war broke out. It was Ernek, the younger brother who joined first. He was 23 years old. Older brother Carl, who was 27 and an engraver for The Argus, took only a few days longer to be convinced to go. Both brothers lived and worked in Prahran, but both put their family home, 1 Barry Street Mentone, on their enlistment papers. 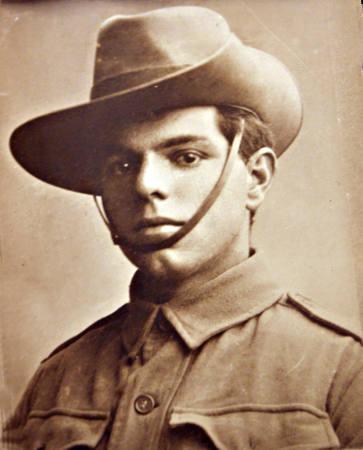 Private Janssen of Barry Street Mentone, of the 5th Battalion at Mena Camp in Egypt.

The brothers joined the 5th Battalion and after spending time in Broadmeadows for training, soon headed out from Station Pier on the 21st October 1914 on the HMAT Orvieto. It was on board the ship that the need for letters and the desire to communicate really began.

Carl wrote home often, mostly to his sister Beatrice who was living in Warrnambool and also to friends and his parents. The need to give and receive news and to maintain contact with family is clear. On the 26th October, he writes:

This will be posted at Albany, our final port of call. There is not time to write more than a short note. I have been sick since the day after we left but am recovering now. We have had perfect weather from the first. By the way, I am a Lance Corporal. I got my stripe in a birthday present. I daresay Mother will send our letters on to you to read. It will be your turn for a longer letter next time.
Your loving brother Carl 1

He seemed frustrated and confused that letters were not always getting through. He found communications poor and stated,

I received your letter marked 6th written on March 8th last week. I did not have notice in time to write even a note so had to be content with a card. Ernek did not know in time to write at all. I cannot understand that you do not get my letters though there are others here get word of their letters not reaching home… 2 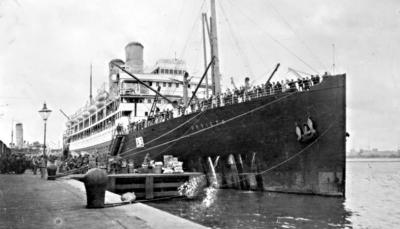 HMAT Orvieto at the wharf in Alexandria, troop transport ship for Australian soldiers.

Ernek's letters home are quite different. He writes frequently to his younger sister Naja, who is attending school. He mentions his dog, Bosco and despite the crowds of soldiers on board, obviously misses him.

I have often wished that we had brought Bosco on board with us he would have been great company no doubt. 3

Both brothers sent home souvenirs of the ship, a booklet of pictures showing places labelled ‘Dining Saloon’ and ‘Deck’. These pictures have short annotations like, ‘we drill here sometimes’ and ‘sergeants and lectures’ and finally, ‘2nd smoking room’. ‘The guard rests here when on Guard’.

Once arriving, the brothers' seemingly endless time in Egypt began. At Mena Camp, they do a lot of marching and training, but also exploring and sightseeing. Carl's letters home are filled with the wonders of seeing the pyramids and the sphinx. He writes of getting a ‘Kodak’ camera and sends home films. The photos he takes are of young native boys selling oranges and Australian soldiers lounging about in the red dust in front of bell tents. 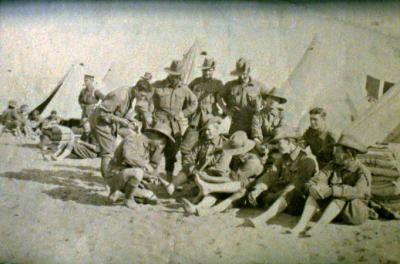 Australian soldiers of the 5th Battalion at Mena Camp Egypt, having feet inspection.

Finally, after months of training, Ernek writes to Beatrice that they are heading out. This note is undated and obviously written in haste.

In train Easter Monday morning 2AM
Just a note we are on our way to getting the boats to go away to fight. I suppose you will hear all about us in the papers. We are all glad to get away from Egypt. Carl and I are both well and still in the same company. I will have to chance getting this posted. We will get to Alexandria about 7 am so we will have to get what sleep we can in the train hoping you are alright and Mother and Father also. I am your loving brother Ernek. (Excuse scribble.) 4

Easter Monday in 1915 was on the 4th of April, just two weeks before the landing. Carl's last message before the battle was sent on the 11th of April. He was only able to send a field service card. This was like a post card, which had printed sentences soldiers were supposed to cross out what was not needed. The sentences left on his card included:

I am quite well.
I have received your letter dated March 8th.
Letters follows at first opportunity. Carl.
Date: April 11 1915 5

But there were no more letters from the brothers. News started coming from other people and from other places. Telegrams, cablegrams, official forms and correspondence. The connection between the family and the brothers was gone.

Instead, the letters that are in the files of the Australian National Archive belong to their father, Inuk, who was back home in Mentone, and desperately trying to find out what had happened to his sons. Clearly, he had been informed that Carl was killed at the landing on Gallipoli. Eyewitness accounts record how Carl was hit by shrapnel before he had even left the boat, but was able to get ashore. Carl was put aboard the S.S. ‘City of Benares’, but died on his way back to Alexandria. He was buried at sea.

The Red Cross Wounded and Missing Report 6 includes a number of conflicting eyewitness accounts of what happened on the beach that day. What is known however is that Carl and Ernek were in the same boat, and landed at Anzac Cove on the 25th April 1915 7. One eyewitness claimed that Ernek was killed later that same day, however this was disputed and later disproved.

Inuk and Margaret, at home in ‘Nessway’ in Barry Street, were feeling the strain of not knowing what happened to Ernek. The tragedy of his fate is that there were so many rumours and much misinformation about what happened to him. A letter arrived from Ernek on the 13th May 1915 8, causing confusion and a tantalising glimmer of hope. Then a telegram arrives on the 24th June 1915 9 stating that he has been wounded, “not seriously so”. Another connection lets the family know that he met Ernek in a convalescent home in Malta 10. This begins another stream of exhausting and finally fruitless inquiries. 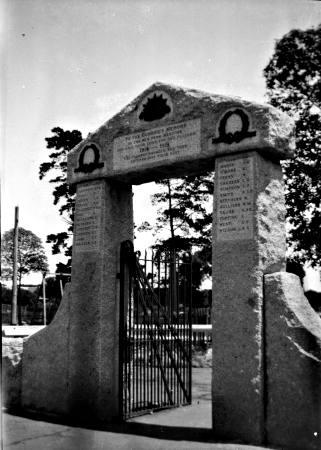 Inuk seems resigned to the death of Carl, but is desperate to find out what has happened to his younger son. Following no word from Ernek, in February 1916 Inuk starts to write to Captain McLean, Officer in Charge of Base Records.

Dear Sir!
Hearing you are willing to assist people to trace their wounded sons, I am taking the liberty to ask if you will kindly help me. My son Pvt E.V. Janssen No 359 5th Battalion, C company 1st Australian Division was reported wounded by the Defence Dept 18th June, I can get no further news from them…
Would you oblige by trying to find out where he is. His brother Lance Corporal C.W Janssen was killed in the landing between the 25th April and 1st May, so please do not confuse the two.
Yours sincerely,
I.P.L Janssen 11

By September, Inuk writes again to Captain McLean after hearing that he will look into the matter. He writes,

Dear Sir!
Thank you for the trouble you so promptly took in looking up matters about my son. Hoping you will soon be able to give me some good news…. I.P.L. Janssen 12

However, no good news was forthcoming. Instead inquiries are made to the Red Cross, who investigated if he was a prisoner of war, or had been wounded and unable to contact them. Finally, the family has the tragic news of Ernek's death confirmed by the Army on February 19th 1917. The Red Cross Report stated that he was killed at the battle of Krithia between the 8th and 12th May 13. His body was never found.

The Mentone Memorial contains 24 names. The Janssen's are the only two brothers who were killed and listed here. People walk past this monolith all the time. ‘Lest we forget’ starts with remembering the individuals and their stories. This family from Mentone deserves to be remembered.