Fairy House and garden with ornaments and a model of an English Cathedral, Nepean Highway Cheltenham.

Over several decades from the 1940s to the 1960s the Fairy House at 1331 Nepean Highway Cheltenham was known to many people. Tourist buses would stop on their way to the peninsula to allow people to admire the sculptured figures in the garden and the elaborately decorated rooms in the house. All these were created by Mrs Stella Hawkes.

The creative project commenced in the early 1940s after some bought garden ornaments were stolen from the front garden. Noticing the disappointment of children at the loss, Stella commenced making her own replacements featuring a variety of themes including a dove of peace, the Old Woman in the Shoe, Humpty Dumpy, a wishing well and a mother duck with her brood of ducklings. They were all created using wet cement which, once dried, were painted. One of the first things she did in this project was to replace the front dilapidated fence. The new rockery fence had places where children and adults could sit, rest and admire the sculptures placed in the garden. 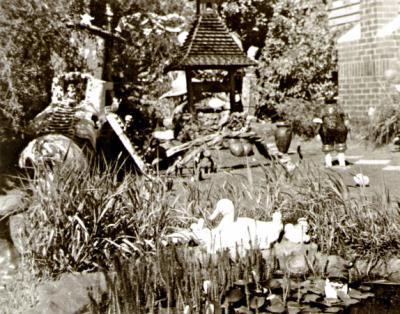 Fairy House featuring the Old Woman in a Shoe, a wishing well, and a family of ducklings, Nepean Highway Cheltenham.

One of Stella’s most ambitious projects was commenced in 1942. It was the creation of a model of what she called the English Gloucester Cathedral. She made use of bricks from a building that was one hundred years old. These bricks were used to create the model fifteen feet long, four feet wide and eight feet high with a slate roof created using oyster shells. Pieces of coloured glass were used in the windows and sections of wrought iron were added to the tower.

The project, which required a great deal of time, patience and creativity, was particularly hard on the hands. Stella’s hands became cracked and rough while the finger-nails became worn and torn. People suggested she should wear gloves but this she resisted as she said the work required the sensitive touch of the fingers. Rather than wearing gloves she refrained for modelling several days a week to allow the hands to recover. 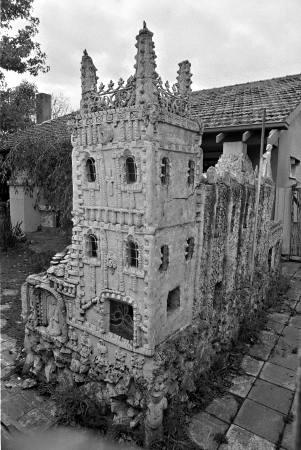 A 4ft by 8ft model of Gloucester Cathedral painstakingly created in Shirley Hawkes front garden in Nepaen Highway Cheltenham in 1942 will be demolished by the new owners.

The interior of the house was also special. Every wall had been covered with full size mirrors and hand painted either with floral patterns or rural frescoes. Each brick in the lounge room fire place had been individually painted, giving it the appearance of a tapestry. The ceiling was covered with a carpet design painted in brilliant colours with one brush using ordinary household paint. The front panels of all the kitchen cupboards had paintings on them and the sink was painted gold and decorated with red, black, green and white dots. The chairs were painted gold standing out from the lower part of the kitchen walls which were black.

There was no charge placed on visitors who wanted to inspect the garden or view the decorations of the house but donations were welcomed. During the war all money raised was given to the Red Cross but after the cessation of fighting the money collected was given to help crippled children.

Stella’s husband, Albert Victor Hawkes died at Fitzroy in 1957 when he was sixty five years old. Her son John Victor died in 1982. He had served in the Second World War and lived for some time with her at Cheltenham. Stella herself died in September 1990. After her death the house at Cheltenham was sold and the work that had taken many years to create was removed. Thus came an end to the Fairy House at Cheltenham.

People in Cheltenham, Mentone and nearby suburbs during the 1040s and 1950s often took Sunday walks that included a visit to Stella’s wonderland. Sometimes a new figure would appear in the garden. In a period when suburbs were generally lacking in unusual visual delights Stella’s was a local icon.