The olive tree had died. Or so it seemed at the time. This was in 2008 when Melbourne was in the grip of a drought that had lasted for over five years. Many other trees had succumbed in that long period when rain became scarce and soils dried out. The olive tree at the front of St Patrick’s Church in Childers Street began to wither and leaves disappeared from its limbs. It seemed to be doomed. For as long as anyone can remember the olive tree at the front of St Pat’s has been there, acting as a link with early days in the parish.

The tree has lasted for over a century. When Mentone was founded in the 1880s some substantial properties were developed between the railway and the beach so the Catholics made their first focus near the town’s centre where they erected a wooden church hall. It was there, in 1904, that the first Catholic primary school was located in present-day Kilbreda College grounds on Como Parade West. Next to it Father Tom Quinn built a brick church that opened in1906.

By the 1920s the church and the school were already too small for the growing congregation that came to St Patrick’s from Mentone itself and many surrounding suburbs. In the early 1920s Father Tim O’Sullivan bought a large property with a residence facing Childers Street. It included land stretching from Rogers Street to Warrigal Road (the current church/school property). He had the foresight to see that the parish would need to build a new school and this land was suitable for the purpose.

The land had become available because its owner, William T. C. Kelly, had died suddenly in 1920 and his estate was sold. Kelly lived in the weatherboard home that occupied the site of the present church building. He was a high office holder in the Masonic Lodge, president of the Mentone Bowling Club, and a Sandringham councillor, as well as being a successful Melbourne barrister. His large property had fruit trees and fields of lavender that covered the current school playground. In his garden near Childers Street he planted an olive tree around the time of Federation when he came to Mentone. [1]

Father O’Sullivan continued to cultivate Kelly’s lavender which, with the help of volunteers, was harvested and sold for parish funds. In 1928 the new two-storey St Patrick’s school building was finished and two years later plans were made to use the bottom floor, originally a hall, for a temporary church, with the Como Parade church being sold to the Brigidine nuns who used it as a hall. Kelly’s old Childers Street home, near the church, was retained and became a meeting place for youth groups and a spare room for the school to utilise. It was always known as the ‘Lodge Rooms’ in the 1940s and 1950s, probably because of its previous owner, the Masonic Lodge man, William Kelly.

Through all this the olive tree remained. When Father Frank O’Hanlon built the current church between 1957 and 1960 he made sure the tree was protected and took special pride in its being out the front as a type of historic marker. But the long drought of the early 2000s cast doubts on the survival of much local vegetation, the olive tree included.

Many people thought the olive tree was practically dead when the drought finally broke in 2012. The tree proved them wrong. Leaves sprouted and after a short time olives appeared as well. It is still there, looking a little worn, but standing upright as a new generation of parishioners pass it on the way in to the large church. Now that the olive tree, is well over one hundred, it is the oldest living member of the parish! The irony of the tree’s Masonic origin and survival seems to demonstrate its freedom from bigotry. 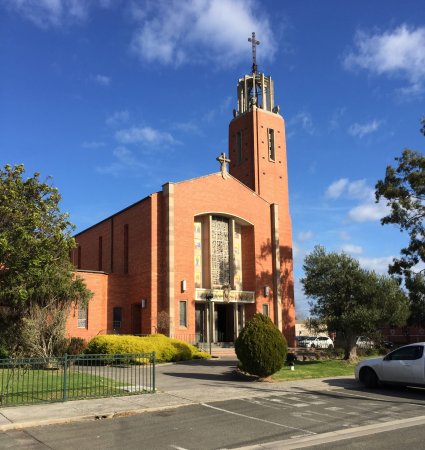