Borough of Mentone and Mordialloc: Battle of the Wards

Prior to 1920 residents of Mentone and Mordialloc were living in the Shire of Moorabbin. Many individuals were not happy with this administrative arrangement, feeling their concerns were being neglected, and as a result they engaged in a period of agitation, deputations and protests. Finally, in answer to this agitation, land in the Shire of Moorabbin, stretching from Latrobe Street in Cheltenham in the north to Mordialloc Creek in the south, was excised to form the new municipality of Mentone and Mordialloc.[1]

One of the early decisions of the new Council was to establish and locate a municipal headquarters. No available building was judged suitable so a temporary solution was sought. A make-shift answer was found at the Mordialloc Mechanics’ Institute, a building that was erected in the 1880s. There, rooms were assigned at the rear of the building. The task to identify the long term solution then became the responsibility of the nine councillors elected to represent residents of the three wards of the new municipality; Mentone, Parkdale and Mordialloc. While it was recognized that the temporary accommodation was unsatisfactory, it was also realized that there was little likelihood that an early improvement could be effected. 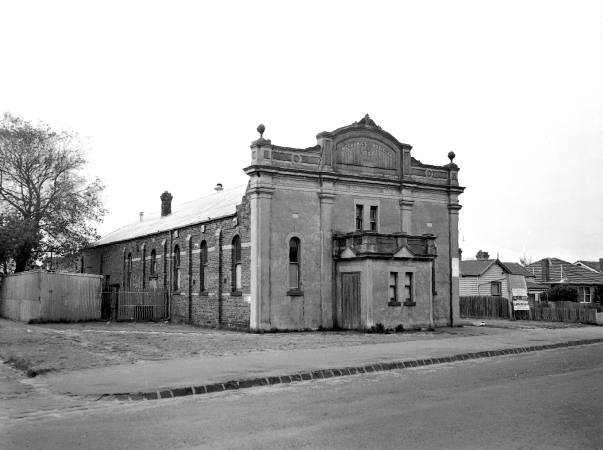 Mordialloc Mechancis’ Institute in Albert Street, Mordialloc. Prior to demolition in 1962 was used as a court house. Courtesy Leader Collection, City of Kingston.

Mentone representatives pointed to the support offered by the Mentone Reserve Committee in arguing their case. The committee was prepared to erect a new building alongside the Mentone Skating Rink for which the Council would pay rent, while also meeting the interest payment on the necessary financial loans. Mordialloc desired to retain the administrative centre of the Council and the Mechanics’ Institute committee offered to invest £1500 in extending the building to more adequately meet Council needs. The annual rent charged would be 10 per cent of the cost of the extensions. The problem with this option was that the Council would not have sole occupancy as the committee proposed using the Council Chamber as a supper room in conjunction with the events held in the hall. This requirement was inconvenient as the Council would have to remove its furniture when the room was required to function as a supper room. The major claim of the Parkdale councillors for their ward was its geographic central location in the municipality. To implement their claim required the Council raising a loan of £2500 to purchase land and erect a suitable building. [2]

Consideration of all the options was given by the councillors but no finality had been reached early in April 1921. What became clear was that a unanimous decision was unlikely. The councilors were too committed and earnest in their advocacy of their own district’s claim. A report in the local newspaper suggested the local impasse could be broken by holding a referendum of the ratepayers at the time of the Council elections in August of that year. However, a few weeks later a decision was reached. They agreed that a building should be erected and it should be in Parkdale. Then followed a series of moves aimed at rescinding the decision. [3]

The Mayor, Cr Sibthorpe, wanted the Council to borrow the necessary money and to commence the work on the new headquarters immediately. He argued the temporary accommodation at Mordialloc was most unsuitable and endangered the health of individuals working there. But agreement could not be reached. Cr Gilmour believed if the Council took a longer lease of the Mechanics’ Hall the accommodation could be made more comfortable. Moreover, he thought the statement about health conditions should be retracted. Cr Rogers opposed borrowing £3000 to £4000 for a municipal building while people were begging for streets and lights. Cr Kroger took umbrage at Cr Rogers’ cost estimates suggesting if a municipal building could be built at Mentone for £600 then the same could be built at Parkdale for an equivalent cost. Cr Bradshaw said the time was not right to engage in such an activity while Cr Edwards thought Parkdale was like Canberra and the Federal Parliament, not yet ready to receive the Council. But it was agreed the Town Clerk, Mr Jenkins, should inquire about alternative accommodation as soon as the lease of the Mechanics’ Institute expired.

Mr Jenkins reported to Council in May that the offer of the Mentone Reserve Committee for temporary accommodation at a rental of £39 per annum for a period of five years should be accepted. Alternatively the Council should proceed to construct its own building immediately. But because of what was described as ‘a dog in manger’ approach, the recommendation to locate temporary accommodation at Mentone was rejected and the idea of building a facility delayed until building costs stabilized. Cr Blanche wanted to immediately purchase land in Parkdale but the Mayor ruled him out of order. Cr Edwards moved that the Town Clerk’s recommendation concerning the Mentone Reserve be accepted so that comfortable offices would be available for staff at a cost of only fifteen shillings per week. This would be the situation until such time as the Parkdale premises were ready, he said. [4]

A new development in the building saga was presented at a June meeting of Council when a proposal was received from Mr Dix, a Mentone resident. He offered to pay for the erection of municipal offices on the Mentone Reserve providing an advance of £2000 at five percent payable quarterly with the principal being repayable after five years. But the outcome, reflecting earlier disagreement amongst councillors, was replicated. Cr Edwards called for his colleagues ‘to sink their differences as they were all brothers in one land, and wherever they met they were out for the good of the ratepayers.’ Cr Rogers said it was imperative to secure better offices if the work of the borough was to be efficiently carried out. Cr Blanche expressed pleasure at seeing Crs Rogers and Edwards willing to borrow money but he saw no reason why there should be any restriction as to the location where the money was spent. When it came time to vote on Mr Dix’s offer only the three Mentone councillors supported its acceptance. [5]

Frustration continued to grow. Cr Imes moved that the Council immediately build its chamber at Parkdale and steps be taken to locate a suitable site and have plans and estimates prepared and the necessary loans arranged. In doing this he acknowledged the inconvenience of the current offices at Mordialloc and the fact that Parkdale lacked facilities. The Mordialloc councillors thought the officers should be at Parkdale but ‘not at the present time’. The Mayor thought it was high time something was done. The staff were working under extremely difficult conditions at the Mechanics’ Institute. He said the rate collector had to carry his cash box around under his arm and the engineer had to use the Mechanics’ library table as a drawing table. Despite this discussion, when the councillors voted on the motion, it failed to achieve a unanimous vote of approval. The Mordialloc councillors joined with the Mentone councillors in voting against the motion which the Parkdale councillors supported. The reporter on the local newspaper suggested two strategies to address the problem. One was to locate the rate collector’s office at Parkdale, the engineer’s and inspector’s at Mordialloc and the town clerk’s at Mentone. The more sensible strategy, he suggested, was to prepare three or four schemes and submit them to ratepayers at the council August election and let the ratepayers decide. [6]

At the second meeting of Council in July 1921, after regurgitating arguments for and against the location of municipal offices at various locations the councillors unanimously agreed to accept the offer of the Mentone Reserve Committee to build a suitable chamber adjoining the Skating Rink at a cost of £600, the rental to be £39 per annum and the Council to have a five year lease, with the option of ten years. These offices were to be of a temporary nature only. There was still an expectation of at least some councillors that the permanent offices of the Council would be built sometime in the future at Parkdale. [7]

In October the Council received a letter from the Mentone Reserve Committee informing them that costs of erecting the municipal chambers at Mentone had become more expensive than expected. Because of the increased size of the building, the strength of timbers used and other alterations the tenders received were higher than those previously submitted. The lowest price of £779/9/9 was submitted by P C Grutt which the committee had decided to accept if the Council would agree to leasing the building for five years at £52 per annum. Once again there was talk that the Council should erect their own building but finally the revised proposal was accepted unanimously. [8]

By February 1922 the temporary building in Mentone was occupied and the improved facilities it provided appreciated. Although some disappointment was expressed with the building being located in a side street and overshadowed by the massive iron structure of the skating rink, rather than facing Mentone Parade. Nevertheless, it was said the new building was comfortable and decidedly more imposing than the temporary offices at Mordialloc, and a place where staff could carry out their work with more dignity and efficiently. 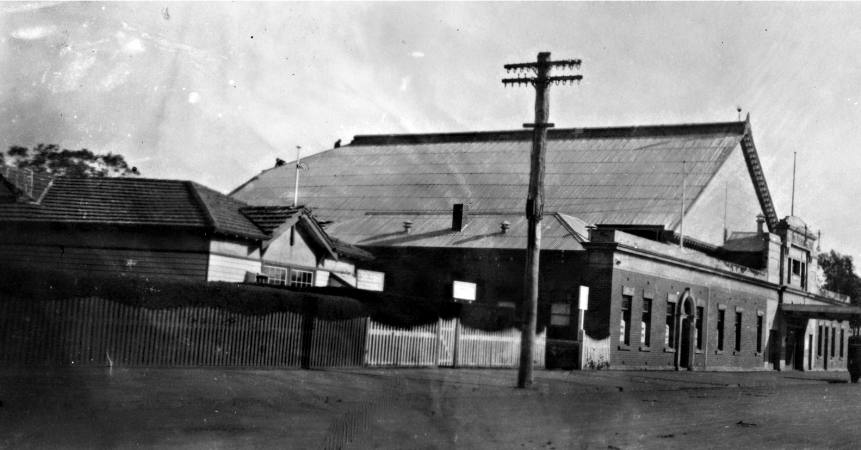 The Borough of Mentone and Mordialloc became a city in 1926 and constructed alternative accommodation in 1934.[9] It was twenty eight years later when a new set of offices were constructed where the Mentone Fire Brigade was previously located on the corner of Brindisi Street and Mentone Parade. It remained the centre of municipal administration for the district until the creation of the City of Kingston in 1994. 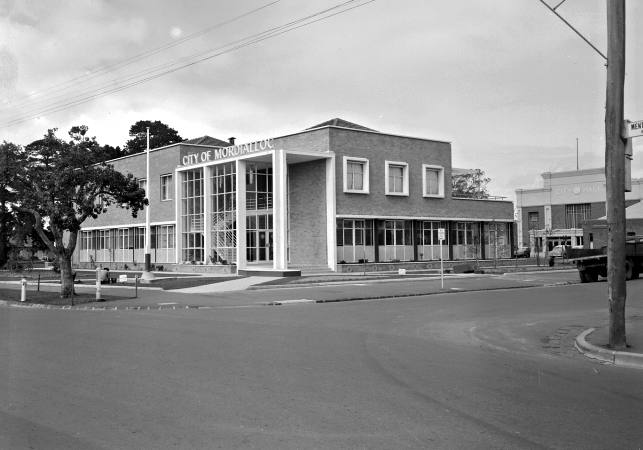