They came mainly by train to the races at Mentone in 1945. Each Race Special added to the crowd of race-goers, mostly men in dark suits and felt hats, all heading with great purpose towards the course, about half a mile from the station. The town, normally quiet and unhurried, came alive with activity and excitement on race days.

A kid we knew, nicknamed Curl, loved race days. For him they offered opportunities. Curl’s taking of opportunities had made him better known than any other kid in the town. Nobody remembered who gave him his nickname, but his crinkly blonde curly hair was why it suited him. 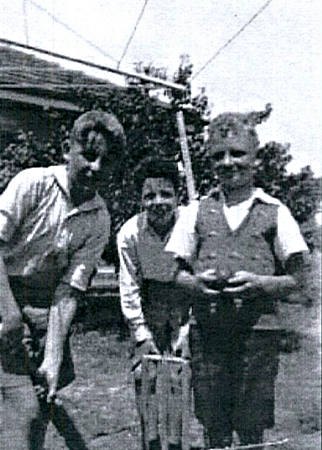 His father was in the army and away for several years during the war, so Curl had freedom for his adventures. He was the bloody pest cadging kicks at Sunday morning football practice on the oval, or the cheeky kid selling golf balls on the sly at the Cheltenham golf links. How he came by the balls was often a matter of suspicion among the golfers. Some thought their fairway shots had disappeared unreasonably at times. Curl went bird-nesting in the Beaumaris scrub, pestered the ice bloke for a lump to suck, and chased the baker’s cart to plead for a spare bun. When Wirth’s Circus was setting up in the paddock near the Picture Theatre, Curl would pester the circus blokes putting up the big top tent until one of them would eventually tell him to ‘nick off or I’ll kick your arse.’ After school finished each day his amusements included using a shanghai to fire lead pellets at the magpies high in the State School pine trees. He also threw crackers into the girls’ dunnies, cheeked the goods train driver shunting rail trucks into the station siding, made farting noises during solemn moments in the Anzac Service at the park, cheated little kids in marble season, or cherry bob season. Any season, Curl was there.

Race Days were best though, and the Mentone Cup day when the war was about to end was a day Curl looked forward to as he headed for the station.

The hot dog man was already doing good business. His boiler, full of steaming water and frankfurts, was bubbling away over a healthy wood fire. Curl asked the bloke if he could split some firewood for a bob, or perhaps sixpence. ‘Too late son. I’ve done it meself’. ‘Sixpence a hot dog. Get your hot dog’, he yelled, eyeballing blokes walking past.

The cabs were already lined up in the siding, waiting for each race train. Some drivers had been there since daylight to be first in line. ‘Bob to the course… Bob to the course’, they rasped as the suits came off the trains. When each cab was full of eager punters, the horses would be whipped and the mad race up Balcombe Road would commence, with some punters clinging to the back of the vehicles as each driver tried to be first to the Main Gate of the course and be back to the station for the next train, and then the next. 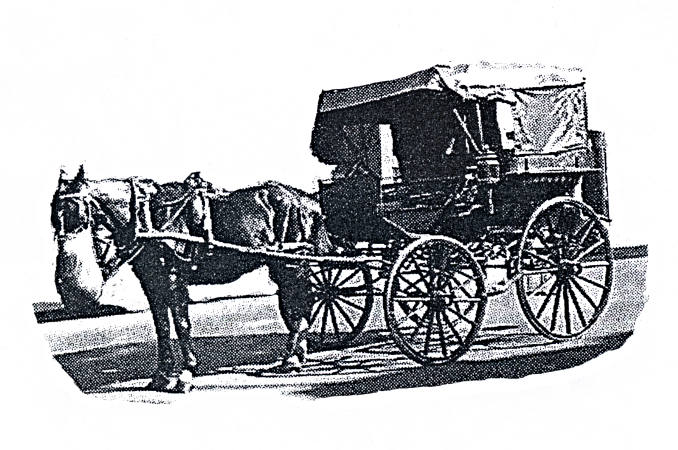 Around midday this cavalcade of vehicles became a frenzy of activity. Small motor buses and hire cars joined in, despite petrol rationing. There were also a few four-horse drags, each carrying twenty of so punters, lumbering along in mid-road and provoking coarse language from the faster competitors trying to pass them. On both sides of the road marched a herd of dark-suited patrons. There were also a few women whose fine outfits included stylish hats. As they stepped it out towards the races the mood of the punters was jovial as they talked about favourites, ‘good things’ and ‘good things’ beaten.

Clinging to the back of a cab in this procession, Curl hitched his way to the course. He got kicked off one cab, but the next one got him there, driver unaware. Near the main gate he began his trade.

‘Pencils a tray. Thrippence a pencil’, he yelled. He had a small bag of little pencils, cut up from Royal Sovereign HB’s that he had bought for a penny each at Blake’s shop near the school. The mark-up was outrageous, but he still managed to sell them all around the time Race One was in progress. Curl then went back to the railway station on the back of an unsuspecting cab.

Stretched along the railway siding were three Race Specials. Parked until the return trip to the city later that day. The carriages were littered with discarded newspapers, mainly copies of The Sun. Curl read The Sun’s inserted coloured comic that featured Ginger Meggs, a cheeky character. Kindred spirits were meeting. Curl collected all the newspapers from the trains and took them to the fish shop near the station. After a short haggle Curl got sixpence for the papers so the shop man could wrap his fish and chips. Later, punters could be buying take-away chips to eat on the train that were wrapped in newspapers they had brought to the town. Happily, Curl went to the Saturday matinee with five bob jingling in his khaki shorts.

On the way to the pictures Curl called at Stewie’s place but his friend was not allowed to go to the Flicks because he had not cut the lawn, his pocket-money job. Curl noticed a bloke on Stewie’s garage roof. Every now and then the fellow would come down and run inside to the phone. Soon he would be back climbing the ladder to resume his spot on the roof. He had a pair of field glasses which he used to watch the grandstand of the racecourse, a hundred yards away over the road. Every now and then a bloke would appear at the end part of the grandstand and make hand signals that seemed to excite the bloke at Stewie’s place and cause his dash to the phone. Curl’s friends said Stewie’s old man was paid ten quid for the use of the roof and the phone on race days. Bookmakers at the course were part of the deal.

At the Flicks Curl swaggered in with money to spend on ice cream and lollies. Before interval there was a Bing Crosby movie that bored Curl and a lot of the kids. They rolled aniseed balls down the wooden aisles making a clattering noise that attracted the usher’s torch which moved in the darkness until it arrived with the usher himself. He kicked Curl out, again! He sneaked back between some big kids after interval just as the serials began. 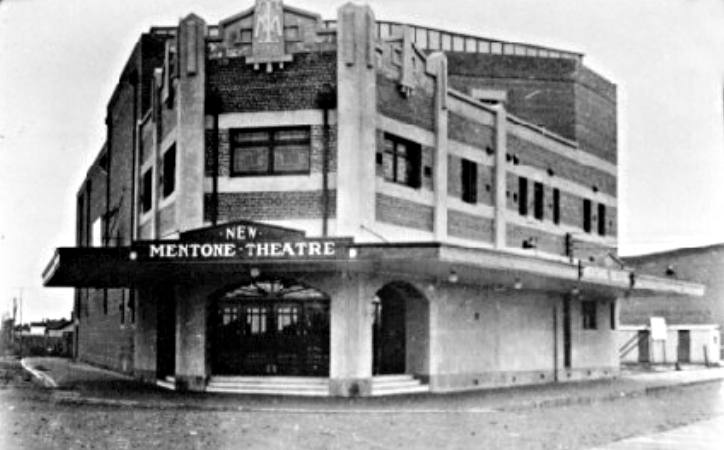 Curl was an expert serial-watcher, brilliant at predicting how the hero would ‘get out of it’ next week. At the end of this week’s serial the Western hero, Kentucky Wade, was just inside a cabin when the ‘bad guy’ blew the thing sky high with dynamite. Curl told the kids around him that Wade would dive out the window and escape next week. Most believed him.

Curl could also predict the exact moment when the serial action would end and he was first out the door this week too, just as the early signs of the returning dark suits were appearing up near the race course. First there was the single cab with its horse galloping flat out towards the Race Special inching out of the siding to reach the station. Then a few more being passed by on odd-looking canvas-backed motor bus. Then the full fury of the morning parade, but reversed in direction and tending towards ill temper.

Soon Curl was at the station, Heralds under his arm. ‘Eeyarairold’, he yelled. He had a practised skill of fumbling for change as a punter made a dash for the train, leaving Curl with an involuntary tip and some extra vocabulary. 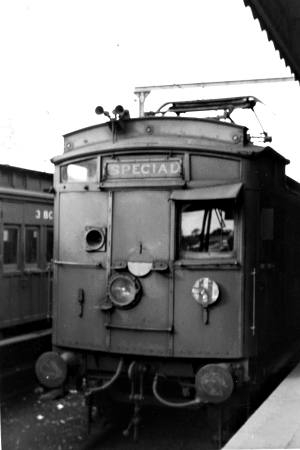 Nearby, the fish shop owner sold chips wrapped in papers with that day’s date on them. Porters got a rare chance to use the station’s loudspeaker. The dark suits seemed to be more ruddy in complexion, less enthusiastic, and more moody than in the morning They complained often, about the railways, the horses, the jockeys, each other.

Trains rattled away towards the city, the cabs rotated around their course, the dark suits thinned out until only a few drunks lingered on, some groping at a crayfish in a newspaper, or feeling for a bottle-shaped bulge under a suit coat. Soon the cabs were moving back along the road to the city and the porters were closing the extra gates at the station. Curl jingled his pockets and decided to call it a day. Back at the paper shop the boss disputed the count of papers that Curl said he had sold. When he received his pay Curl began to thumb through Man Junior on the counter until he was told off and sent home.

Sauntering through the siding near home he felt the coins in his pockets again and then counted his money. Nearly eight shillings. Not a bad day.

Inside his back door he saw his mother at the kitchen sink.
‘Where’ve you been all day?’ she yelled at him.
Curl said nothing.
‘Well, answer me. Where’ve you been?’
‘Aw, just mucking around at Stewie’s place’, he lied.
‘You didn’t make your bed, and there’s no wood cut.’
Curl stood, silent.
‘You’re a lazy bugger. Never help. Fool around all day. It’s about time you learned to help around the place. You’re so ungrateful. Why can’t you find something useful to do. Go and chop some wood, and some kindling as well’
‘Yes Mum, muttered Curl, glad to escape outside.

As he walked to the wood heap Curl listened to the pleasant jingling in his pockets.
Yes, race days were good.