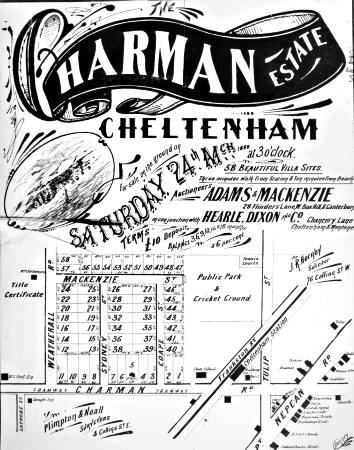 Prior to the arrival of the railway in 1881 the township of Cheltenham was primarily located on Point Nepean Road. The image shows some of the local businesses in 1888. Courtesy Kingston Collection, City of Kingston.

It was reported that a person threw a boy into a waterhole in Cheltenham on 30 November 1876 and the victim drowned. The community was horrified. The reporter and sole witness was Malcolm Corstorphan the seven years and one month old younger brother of the nine year old victim, Archibald Douglas Corstorphan. Malcolm said he and his brother were returning home from school when a lad about sixteen years of age approached them riding a grey horse. The rider exchanged some words with the older brother, dismounted from the horse, tied it up to the fence and after chasing Malcolm caught him some distance away. Archibald was carried into the paddock of Treeby, a local butcher, where he was thrown into a deep waterhole, struggled for a short time and then disappeared. The perpetrator of this action remounted his horse and rode away not to be seen again.

These springs or water holes could be quite deep, were known to the aboriginals, were often recorded on early maps, and for a short time the area was referred to as Mosey Springs, after an earlier squatter in the area. Land developers cited the presence of springs to aid their promotion of land they were trying to sell and market gardeners used them to fill tanks mounted on horse drawn wagons to water their crops in dry times.

As was the practice with unusual or unexplained deaths, an inquest was held into the demise of Archibald Corstorphan, the son of a Cheltenham storekeeper, by Mr Candler at Camberwell. There the circumstances surrounding Archie’s death were discussed and in the presentations it emerged the story told by Malcolm was a complete fabrication, concocted to avoid the displeasure of a father who had previously thrashed him and his brother for going near the waterhole in the paddock of Mr Treeby a Cheltenham butcher. There was no horseman. The tragedy was purely accidental. Obviously, his father was aware of the dangers the waterhole presented and wanted to impress upon his sons the importance of keeping clear. Nevertheless, the Treeby waterhole presented a fascination for young boys.

Malcolm and his brother Archibald were catching leeches in Treeby’s waterhole and putting them in a cask. The cask overturned and in trying to right it Archibald fell into the water. There was no adult close by who could help him. Malcolm went home and told his fabricated story of events. It was about four thirty in the afternoon that James Corstorphan, an older brother, heard the story that Archibald had been drowned so he went immediately to the waterhole opposite the family home to investigate. There he discovered a small cask floating in the water and after about fifteen minutes he recovered the body of his brother.

Local mounted constable, James Cowen, told the enquiry that Malcolm’s original story was included in his report but he thought it most improbable as the paddock in which the waterhole was located was opposite the township on Point Nepean road and in full view. He said many people were about that day because it was market day. Richard Goldstein, a local medical practitioner deposed that he saw the deceased shortly after the body had been taken from the waterhole. There was no sign of life and there were no marks of injury on the body. Ordinary means of restoring animation were ineffectual. Goldstein concluded all external appearances were those of death from drowning.

The jury at the inquest returned the verdict that Archibald had drowned after accidentally falling into a waterhole in a paddock in Cheltenham. He was buried in the Presbyterian section of the Cheltenham Pioneer Cemetery.