Soldier to Soldier: World War One 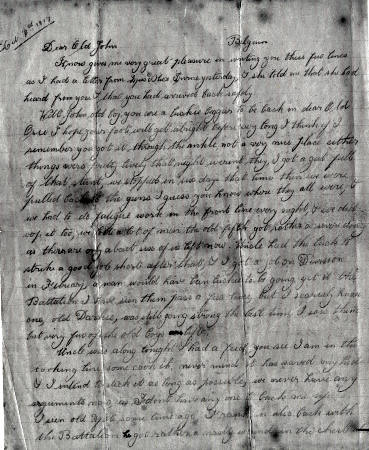 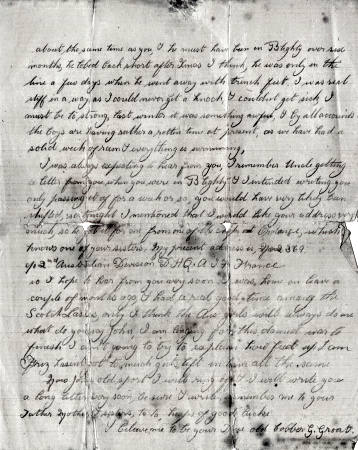 John Allnutt and George Groat enlisted in the Australian Imperial Force a few days apart in 1915 and became mates. John was almost twenty eight years old, a cartage contractor from Cheltenham, while George, a farmer, was twenty` years six months born in Kirkwall, Scotland. After embarking on the HMAT Osterley both were taken on the strength of the Fifth Reinforcement Twenty Third Battalion in Egypt on 11 January 1916 and left for France in March of the same year. John was wounded in action on 28 July 1916 when a bullet shattered his ankle. He spent some time in hospital in England before being repatriated home on the Themistocles on 2 July 1917. 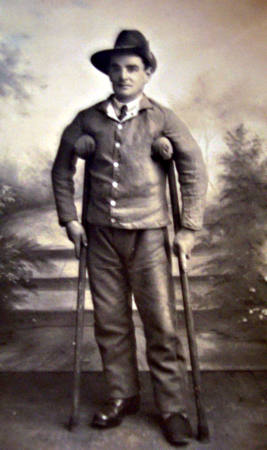 George was writing to ‘Dear Old John’ some months later expressing his frustrations with the war and conditions at the front. He regretted the loss of life amongst their former comrades but was pleased he had been assigned the job of cook where he felt relatively safe from the dangers of the actual fighting. Almost two years were to pass from the writing of the letter to the time of his discharge from the army on 22 July 1919. What contacts George had with John on his return to Australia is unknown.

John Allnutt married and returned to Cheltenham where he took a very active part in community affairs. He died suddenly at home on 10 January 1967 when he was seventy nine years of age. George Groat became a farmer, married and lived in Griffith, New South Wales. It was there that he died on 23 May 1969.

It now gives me great pleasure in writing you these few lines as I had a letter from Miss Alice Irvine yesterday, & she told me that she had heard from you & that you had arrived back safely.

Well John old boy, you are a lucky beggar to be back in dear Old Osie I hope your foot will get alright before very long I think if I remember you got it through the ankle, not a very nice place either things were pretty lively that night weren’t they, I got a gut full of that stunt, we stopped six days that time then we were pulled back to the guns I guess you know where they all were, & we had to do fatigue work in the front line every night, & we did cop it too, we lost a lot of men the old fifth got rather a severe doing as there are only about six of us left now. Uncle had the luck to strike a good job short after that, & I got a job on Division in February, a man would have been luckie to be going yet the Battalion I have seen them pass a few time, but I scarcely know one, old Darkie, was still going strong the last time I saw them but very few of the old boys are left.

Uncle was along tonight I had a feed you see I am in the cooking line, some cook eh, never mind it has saved my hide & I intend to stick it as long as possible, we never have any arguments now, as I don’t have any one to back me up. I seen old…………some time ago, Frank is also back with the Battalion he got rather a nasty wound in the chest about the same time as you, & he must have been in Blighty over six months, he lobed back short after Xmas I think, he was only in the line a few days when he went away with trench feet. I was real stiff in a way as I could never get a knock, & couldn’t get sick, I must be strong, last winter it was something awful, & by all accounts the boys are having rather a rotten time at present, as we have had a solid week of rain & everything is swimming. I was always expecting to hear from you, I remember Uncle getting a letter from you when you were in Blighty & I intended writing you only passing it off for a week or so, you would have very likely been shifted, so tonight I mentioned that I would like your address very much, so he got it for me from one of the chaps at Ordnance, which knows one of your sisters. My present address is No.2369 c/o 2nd Australian Division DHQ. AIF France so I hope to hear from you very soon. I was home on leave a couple of months ago, & had a real good time among the Scotch Lasses, only I think the Aus. Girls will always do me what do you say John, I am longing for this damned war to finish I aren’t going to try to explain how fed up I am Friz hasn’t got much guts left in him all the same.

Now John old sport I will ring off & I will write you a long letter very soon, be sure & write, remember me to your Father Mother & sisters, ta ta, heaps of good luck

& believe me to be your True old Cobber