With the ongoing problem of excess water on the Carrum Swamp the early selectors protested and sought help from the government to relieve the situation. 1 A solution implemented in 1879 was to create a channel, later called Patterson River, cutting the Point Nepean road and the sand ridge bordering Port Phillip Bay, to allow trapped and unwanted water to escape the swamp. This solution required the construction of a bridge across the cutting to allow movement of people and vehicles from the north and south. 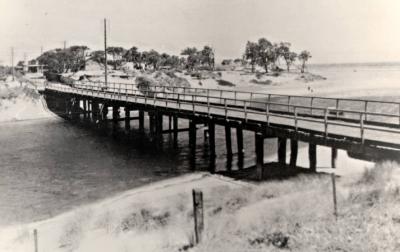 Part of the contract to construct the cutting, given to H Powis, was the requirement to also construct a bridge with a 25 feet span and a 20 feet width. The total contact price was £1167 but additional costs were incurred because the Dandenong Council had to purchase land between the road and the bay. 2 The first pile for the bridge was driven on 24 March by Mrs Lyster, the wife of the publican of the Mordialloc Bridge Hotel. The day was marked with celebration. A coach driven by Mr Lyster and accommodating the contractor and his guests left Dandenong and arrived at Mordialloc an hour later. There the party was joined by others who then proceeded to the site of the bridge which was decorated with flags and bunting. Once the ceremony of pile driving was completed refreshments were provided for the workers. The party then returned to the Bridge Hotel where a ‘capital dinner was provided and thoroughly enjoyed by the company’ and the usual round of speeches and the loyal toast occurred. 3 It was four weeks later that the local newspaper reported that Mr Powis, the contractor, had driven the first conveyance across the bridge. 4

It was only sixteen months after the opening of the bridge that it was damaged beyond repair. Heavy rainfall resulted in extensive flooding on the swamp and the rush of water down the cutting completely carrying away the timber bridge connecting Mordialloc with Frankston. The continual flow of water had undermined the piles which were only resting on sand. Not only was the bridge carried away but also a large quantity of the embankments on each side of the bridge was scoured out leaving an extensive gap in the roadway. The loss of the bridge caused considerable inconvenience to residents in the district and beyond. 5

Temporary provisions were set in place. A pontoon bridge was erected but it had limitations. Drivers of vehicles were warned to walk their horses over the bridge and lamps were placed at each entry point. Traffic between Frankston and Mordialloc was carried by this temporary bridge for several months. 6

Some members at a well-attended meeting in the Dandenong Shire Hall attempted to allocate blame for the disaster, drawing attention to what they considered the ‘insane action’ of the Dandenong Shire Council and the Government. The majority of those present, favoured a deputation to the Minister of Public Works supporting the temporary action taken, but pressing the urgency of implementing some permanent scheme that would cater for the future. 7 By late September 1880, the Dandenong Shire Council had been asked to reconstruct the bridge and had been promised the government would meet half the costs. 8 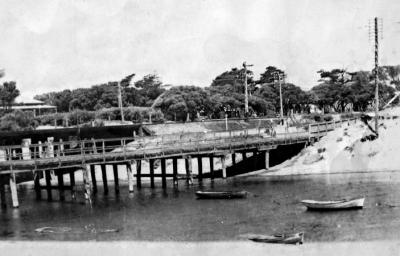 Three engineers were commissioned by the Minister of Works to inspect the site of the cutting and the course of the Kananook Creek five miles from its mouth. They concluded that it was not advisable to close up the cutting’s outlet into the bay nor to enlarge the bed of the Kananook Creek as some individuals were suggesting. Moreover, they recommended two separate bridges should be constructed across the cutting; one for the railway and one for road or ordinary traffic. In relation to the latter, it was suggested attention should be given to preventing the banks of the channel ‘being washed down and widened any further by the action of the sea of flood waters.’ 9 In March 1882 a contract for £1351.5.0 was given to James Cook to erect a timber bridge with approaches over ‘Carrum Swamp outlet’. 10

With the passage of a little more than a decade, a newspaper reported concerns about the condition of the bridge across the Patterson River and the lack of attention being given to its maintenance. The bridge was sinking! 11 A week later, just before Christmas 1894, the same newspaper marked its collapse and the stopping of all traffic. 12 A correspondent to the Age wrote.

This wretched structure fell in after giving the authorities many months’ notice. At present nothing has been done although weeks are passing rapidly away, and this important communication by road is cut off. Not even have they removed the fallen timber … (the) delay is of the utmost importance to the fruit growers on this side of the river, who are cut off from their market. 13

Two months after the collapse of the bridge, people were complaining about the lack of action by the authorities. Market gardeners and orchardists were in the middle of their busy season and they needed to convey their produce to the city market but the only options they had were to either travel via Dandenong, significantly increasing the distance travelled, or to take half loads along the beach at the mouth of the Patterson outlet at low water. 14 The back roads to Dandenong were difficult to find unless the drivers were thoroughly acquainted with the locality and were impossible to traverse at night. 15

By June 1901 a newspaper report claimed the dimensions of the cutting had assumed the proportions of the River Yarra and were growing larger with winter rains. The banks were continuously crumbling away. 16 Nevertheless, by that time a more substantial bridge had been constructed.

With the passage of almost ten years, in 1910, the condition of the bridge was once again the centre of controversy. Large nails, it was reported, protruded about an inch above the planks while the ends of some planks were sticking up two or three inches. 17 Engineers from the Country Roads Board and the Carrum Borough Council in 1925 restricted the load weight of vehicles crossing the bridge to 4 tons and suggested some temporary strengthening. The problem was that neither organisation had the money to construct a new bridge. As the bridge continued to deteriorate the strategy adopted was to reduce the permitted weight load of vehicles, and allow only one vehicle to cross at a time at a speed of no more than ten miles per hour. 18 In June 1926 the Country Roads Board authorized the construction of a new concrete reinforced bridge and the calling of tenders, but the source of funding was not clear. 19

Looking around for assistance to meet their financial obligations the Council approached the Federal member for Flinders seeking Federal funds. At the time, the member, Stanley Bruce was also Prime Minister of Australia. Residents of Carrum argued that ninety-five per cent of traffic on the bridge was ‘foreign’ coming from Frankston and beyond. The claim was that the Commonwealth Government, especially the Defence Department, was a major user of the bridge and therefore they should make a grant towards the cost of its replacement. As the local member for Flinders, Stanley Bruce promised to strongly urge the claim for financial assistance but as Prime Minister he was doubtful whether he would be able to grant it! 20

In 1927 a local newspaper reported that the bridge was almost completed, the concrete portion was practically finished, the electric lights were in position and the roadway was almost ready for the coating of bitumen and the footpaths for asphalting. 21 But the Council had still not found their financial contribution.

John Lyden believed he had a solution to the financial problem. Earlier, in a letter published in the Carrum Borough Gazette, Lyden offered to construct the bridge to Council specifications without charge, provided he was allowed to levy a toll to a maximum of one shilling per vehicle for a period of three or four years. Local people, he suggested, would be charged a concessional fee while government and municipal vehicles would be allowed free transit in his scheme. 22 The suggestion was scorned by Cr A J Boyd. Boyd pointed out that the Local Government Act gave certain powers to councils but there was no provision for the introduction of a toll on a road under the jurisdiction of the Country Roads Board. In his view toll gates were a thousand years behind the times and he was against such an antiquated system as a medium to right anomalies. 23 Jones, the Public Works Minister, wrote in support of a toll. He argued that a toll system would relieve the burden of cost for the borough as well as saving the contribution of the State government which could then be directed to better roads and construction of minor bridges. 24

A deputation met with the Minister of Public Works, and told him the cost burden of the bridge reconstruction was too great for the municipality to bear, but they failed to gain a satisfactory outcome from the Minister. 25 In April 1929 the Council was informed by the Country Roads Board that the cost of constructing the bridge over the Patterson River was £18,124.18.2 and that the Council must pay half this amount less £1000 which was a grant made by the Ministry of Public Works towards the cost of the bridge. 26 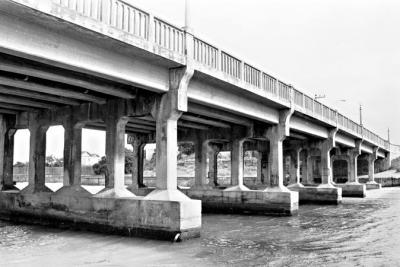 Seventeen months later the Council was still complaining about the burden the bridge’s cost, was placing on their municipality and reiterating the point that ninety three per cent of bridge’s traffic came from other suburbs. (This was a time when the Great Depression was having a significant impact on the financial status of communities throughout Australia with many people being out of work.) The Mayor of Chelsea, Cr McRae, thought the charge was outrageous and the burden of paying for the bridge was a millstone which the Council could not carry and asked that the Minister increase the size of the government grant for the work. He was supported in this plea by councillors Rigby, James, Boyd and Beardsworth. The Minister, Mr Kiernan, replied that he was impressed by the case presented. However, he pointed out that in January, 1925, the Council had been notified that the bridge was to be built, and that it would have to bear half the cost spread over a period of 31 years. At that time no serious objection was made to this plan. Nevertheless, he said, he would give sympathetic consideration to the representations made. 27

Seven years later, in 1937, improvements were made to the bridge following complaints that it was a ‘bottle neck’ for traffic and needed to be widened. The work was supervised by the Country Roads Board at a cost of £5000, employed twenty five men and was completed in a little more than six months. The bridge, originally with a road width of twenty two feet, was widened by ten feet. Foot traffic was catered for with five feet paths on each side. 28 A major reconstruction took place in 1995 and was officially opened in November by the Honourable Sue Wilding, the member for the Chelsea Province in the Legislative Council. The new bridge accommodated a four lane highway and with three piers in the river replacing the five in the previous bridge facilitated a better flow of water to the bay.