I Know where Beaumaris Is! 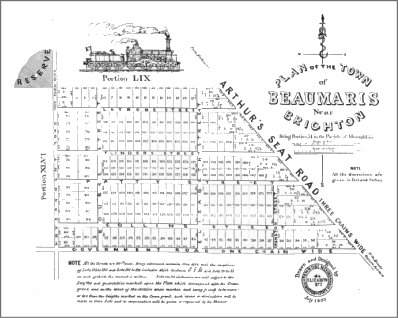 Map drawn and designed by Penrose Nevins, Surveyor and Estate Agent. The note attached indicates that all the streets were sixty-six feet wide. Every allotment contained one acre with several exceptions.

Today the suburb Beaumaris is defined as the area of land bounded by Charman, Beach, and Weatherall roads, Keating Street and Surf Avenue. In 1853 Beaumaris Town was in part of what is known today as Mentone and Cheltenham. Josiah Morris Holloway bought Portion 51 from William Mitchell, the original crown grantee, and subdivided it for sale. He named the estate Beaumaris. It covered two hundred and thirty one acres bounded by Charman Road, Latrobe Street, Nepean Highway and Balcombe Road.

William Mitchell paid £473-11-0 for the land in 1852 and sold it to Holloway in August of the following year for £1386, more than doubling his investment in less than twelve months. Holloway then proceeded to recoup his investment with sub-division sales commencing in October of the year of his purchase. The sales continued into 1859, by which time Holloway had received £3426. This sum was not pure profit as Holloway had the original cost of the land and no doubt had legal, advertising and surveying expenses. Yet it was a handsome reward for his initiative and risk-taking. A few years later, in the 1890’s, many land speculators lost large sums of money rather than making large profits.

An advertisement in the Argus of September 3, 1853 described the "new township of Beaumaris, near Brighton," as being "…situated about three miles and a half beyond the Little Brighton Hotel, on that grand southern outlet, the great Western Port Road of the enormous width of three chains; to which road it has the magnificent frontage of three quarters mile. It also has the advantage of a mile and a half frontage of two other Government Roads, both of which lead to the sea beach.

"It is well known that the land in this locality is rising rapidly in value; and the advertiser can without fear of contradiction assert that the section now offered for sale, is the only portion in the whole of the Parish of Moorabbin possessing the twofold advantage of being within half a mile of the sea, and possessing a frontage to the grand trunk road above referred to. ...

"The railway to Brighton will ere long be completed and it needs not the eye of the prophet to see that the line will be continued to that extensive agricultural district, Western Port Road. ... It can hardly be doubted that there will be a Railway Station in the immediate vicinity, as in no other part of the parish does the Great Western Port Road approach near to the sea. In fact so confident is the advertiser on this point, that it was originally intended that it should bear the name of Station Town. The name of Beaumaris being suggested by Penrose Nevins Esq., Surveyor, as being peculiarly applicable to the spot, on account of the enchanting position and its striking resemblance to that most delightful watering place. The property is accessible from the city by land or by water, a fact worthy of notice with the services of the railway and the proposed canal to the beach, in a very short time we may see a jetty erected opposite the township."

Of the 200 lots in the estate, sales ranged from £11 to an exceptional £76 paid by Grace Taylor for Allotment 19 fronting onto what is Nepean Highway today. A more common price was around £30 pounds. Thomas Bruton, father of William Bruton the local historian, paid fifty-two pounds and ten shillings for a block adjacent to that of Grace Taylor. Other purchasers included John Addicott, Samuel Judd, Frederick Meeres, Joseph Paul Augear, Louis Leplastrier and Edward Rusk.