In April 1927 the first Infant Welfare Centre for the City of Mordialloc was opened in the Kindergarten at the rear of the Church of Christ in Como Parade Parkdale. (The City of Mordialloc was proclaimed on 5 May 1926) This achievement had not been easily won. Mrs Gilmour and Mrs Horten, members of the Mordialloc Mothers’ Club of the local primary school, approached Cr Blanche arguing a baby health centre was a necessary facility for mothers and the Council should facilitate its creation. He placed the idea before his colleagues but it was overwhelmingly rejected with many believing the expense was excessive and unnecessary in a municipality where the residents were healthy. They therefore thought that infants would all be healthy and mothers’ would not need additional assistance. Twelve months later he presented the idea again. This time the Mordialloc Mothers’ Club was joined by the Parkdale Mothers’ Club who called a public meeting and arranged a deputation to Council to present their case. Dr Vera Scantlebury, Director of Infant Welfare in Victoria, and Sister Peck also spoke with Council to educate them on the advantages of such a centre. Finally, the Council conceded. At the official opening the Mayor, Cr Denyer praised what he described as the pioneering work of Cr Blanche but Blanche rejected this description and in deprecating his role pointed to the contribution of others and suggesting the real individuals in its creation came to him for support because he was ‘the youngest councillor with the largest family and possibly the one to avail himself of its services’. 1 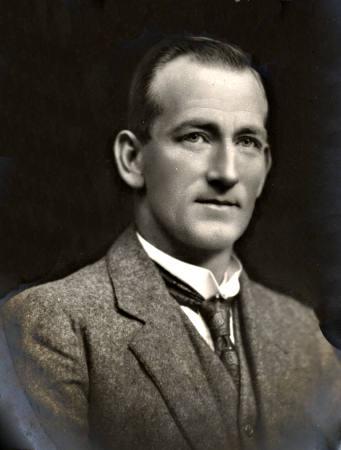 Sixteen months later, in August 1929, a second official opening occurred but this time in a building erected specifically as an infant welfare centre by the City of Mordialloc on corner of Herbert Street and Como Parade West, Parkdale. The Mayoress of Mordialloc, Mrs Edwards, opened the door and declared the building open. Then followed a series of speeches. The Mayor congratulated Mr Morley, the contractor, for his part in erecting a fine, up to date building with the latest equipment, and welcomed Sister Robin as the centre’s manager and sister in charge. Dr Vera Scantlebury who had been interested from the very beginning in the developments at Mordialloc pointed out that the presence of such a centre was a mother’s right not a charity and the mothers should show their appreciation of the Council’s action by making use of the facility and the services it offered. Centres she said were part of a worldwide movement which aimed at two things. First, a reduction in infant mortality and secondly, to make the remaining years as healthy as possible. At the conclusion of the speeches all individuals present were invited to go to the Winter Gardens in nearby Parkers Road and enjoy the refreshments provided by the mayor. 2

The Argus newspaper of 2 March 1940 carried an advertisement from the Mordialloc Council Town Clerk, E Owbridge, for a qualified Infant Welfare Sister to take charge of the infant welfare centre at Parkdale. The salary was set at £208 per annum. People interested in applying for the position were asked to provide copies of testimonials as to experience and character, together with certificates of training and registration. 3

Four years later Sister Easterbrook was drawing the attention of Council to the inadequate nature of facilities at Parkdale.

…The consulting room is 9 ft x 9ft 5in, window open to weather and opposite the door and on most days has to be closed, large table 4 ft 9in x 2 ft on one side of room, opposite side is filled with large cupboard 4ft 9in in depth x 2ft which nearly reaches to the ceiling. Sink and telephone on the other wall and part of large cupboard door take up another side of room. My chair and the visiting mother’s chair fill up available space on floor. If the mother had any toddlers trying to move round the room, it is impossible to concentrate on your work, as the building is too noisy. ‘There should be a toddlers’ room so that the mother can listen to what you are telling her instead of trying to keep children quiet. It also hinders me when I am very busy, makes the work very nerve- racking, and often I have to repeat advice. ‘There is no test feeding room, so babes have to be fed in a noisy weighing room, which is not right. For the present attendance I consider the building is not large enough, and as the birth rate and attendance are both increasing, I consider extensions should be made. Sewerage is also necessary. 4 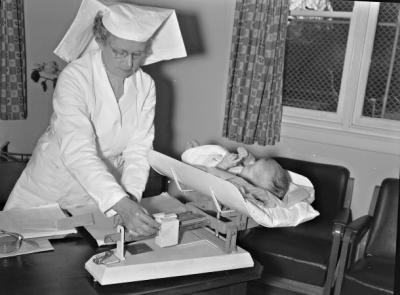 Sister weighing a baby at the Parkdale Health Centre in Como Parade Parkdale, 1962.

Shortly after Sister Easterbrook presented her report to Council, a group of experts on Child Infant Welfare services met in May 1944 at the Parkdale Centre with the Council’s Health Committee chaired by Cr F Herbert. A key member amongst the visitors was Dr Vera Scantlebury-Brown. She acknowledged that when the centre was first opened the premises seemed adequate but since the 1920s many things had changed. The population of the district had grown and was continuing to increase. In 1941-42 the number of children attending the Centre had been 4,789 and in the following year the number had increased by 487. During March of that year as many as 57 babies and children had attended the Centre in one day. Originally the Centre focused its attention on babies from one month to two years of age but Dr Scantlebury-Brown pointed out it was subsequently realized that children up to six years of age required as much attention as those under two years of age. In catering for these changes, she suggested, it was essential the facilities at Parkdale were enlarged and enhanced. 5

In terms of planning the extensions Dr Scantlebury-Brown stressed the importance of providing for the physical, mental, social and emotional development for every child.

Every child needs a garden, with trees to climb and shrubs for him to race round, so that he can satisfy his spirit of adventure. He must have places where he can climb and balance, if he is a normal healthy boy, and if these are not provided he will probably seek those in undesirable and dangerous places. If the garden has a small hillock or mount, this will give him endless joy, because he will run up and down it, roll and crawl on it and find endless diversions for himself. 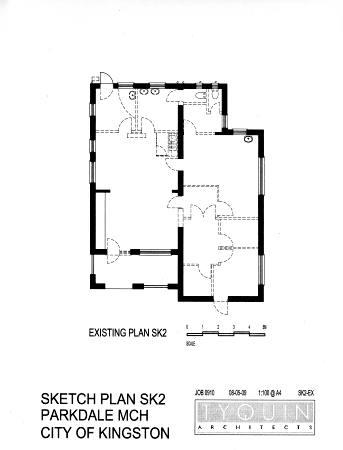 Given this need, Scantlebury-Brown recommended sufficient land be provided for a playground at the Centre. She suggested the approximate area required for pre-school waiting place as 75 square feet per child, and for an indoor waiting place 35 square feet per child. The size of the room and playground depended upon the number of possible attendances. Also recommended were toilet facilities accessible from playground and playroom, a verandah porch where prams could be parked, together with waiting, weighing and consulting rooms. Other rooms to be considered were test feeding and sister’s room, and perhaps a doctor’s and anti-natal room. 6 Many of these recommendations were implemented in 1948.

By 1973 three Infant Welfare Centres had been established in the City of Mordialloc: Parkdale, Mentone and Mordialloc. At each of these centres

…any aspect of pre-natal care, pregnancy worries and preparation for baby’s arrival can be discussed. Post-natal advice on maternal and child care is given including weighing and measuring, examinations, hearing tests, immunization, diet, hygiene and general management. All services are free. 7 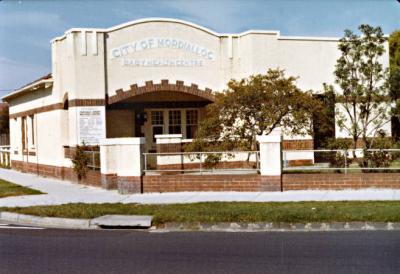 The City of Mordialloc Baby Health Centre in Parkdale, 1976.

The Chelsea Baby Health Centre opened in 1953 followed by Aspendale and Carrum in 1955. By 1960 the City of Moorabbin had six Baby Health Centres along with four sub-centres. Many of these centres became the responsibility of the City of Kingston after the amalgamations of municipalities in 1994. The new municipality had eighteen Maternal and Child Health Centres. At the time, Council was considering whether the existing usage of buildings and facilities was the most effective arrangement, particularly with new municipal boundaries and wide variation in the physical standards of buildings across Kingston. 8 In 1999 the centres of Parkdale, Mentone and Mordialloc were combined and moved to the Central Bayside Community Health Services at 335 Nepean Highway, Parkdale, where their services continued. A further relocation of these Child Maternal Services was implemented in 2014 when they were placed in the new facility located at the Parkdale Secondary College at 122 Warren Road. The new facility known as the Parkdale Family and Children’s Centre was built at a cost of approximately $6 million with funds from both the Kingston Council and the Victorian Department of Early Education and Child Development. 9 There a range of services was provided for babies and young children such as kindergarten, day care and maternal and child health.

After the Health Centre services were moved to the Central Bayside Community Health Services on Nepean Highway in 1999 the building on the corner of Como Parade West and Herbert Street continued to be used as a nursing mothers group centre and information library where the number of people making use of the building at any one time was likely to be eight. In 2003 some refurbishments of the building took place at a cost of $26,720. But that usage ceased several years later. 10 In 2015 some thought was being given by Council and an advisory group to utilizing the building that had been given a ‘heritage overlay’ as a Heritage Centre.