Our Lady of the Assumption (OLA) Cheltenham Catholic Parish

Until 1949, Catholics in the Cheltenham area attended Sunday Mass in neighbouring parishes, including churches at Mentone, Highett and Black Rock. Father Gerry Quilter, the parish priest of St Agnes in Highett, was given responsibility for pastoral care in Cheltenham. In 1949, Frank O’Hanlon, parish priest of St Patrick’s, Mentone, made an arrangement to have Sunday Mass in the RSL hall on Nepean Highway in Cheltenham. St Patrick’s usually provided the priests at a time when it had a parish priest and two curates. Housing development began to increase at this time and numbers attending the Cheltenham service became so great that a more spacious venue was needed. Fr O’Hanlon purchased land in Centre Dandenong Road, the current OLA site, in order to erect a primary school building that could also be used for Sunday Mass. By April 1952, Tom Bonnice’s workers had completed the building and Sunday services commenced with the first Mass, celebrated by Fr Quilter. It was referred to as a ‘church-school’, a title most Catholics of that time knew and understood. The first principal of OLA primary school was Mother Mercedes Brown, a Mentone woman who entered the Brigidine Order of nuns who were the first to staff OLA school, travelling to Cheltenham by train each day. Mother Mercedes had Sister Brigida as an assistant teacher and later others joined the school staff as numbers grew.

To begin with, the school building contained three large rooms, separated by doors that could be folded away to create a large hall for Sunday services. Of course, each Friday evening the men of the parish had to move the desks out so pews could be put in place, and reverse the process on Sunday afternoons when Masses were over. In the early fifties, parishioners ran functions such as square dances in the hall to raise funds for the church-school. By 1958, the Archbishop had made OLA a separate parish, no longer administered from Mentone or other established parishes. Father Day was parish priest for three years and then Father Bracken took over, serving as OLA leader for thirteen years. In that period, Fr Bracken oversaw the building of several more classrooms for the increasing numbers on the school roll. He also arranged for the building of a new solid brick presbytery by 1963, replacing the eighty-year-old timber cottage that had served the priests until that time. The cottage by then was dilapidated and had been condemned by the local Council. 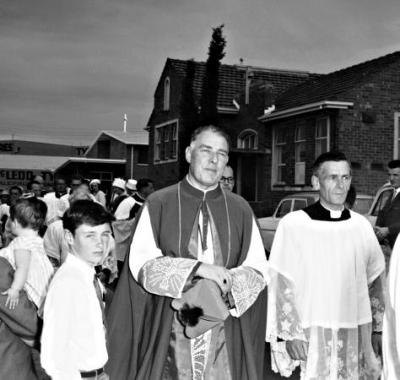 During the sixties, there was continuing development of buildings and facilities on the church-school land. A house to the east of the school was bought in 1965, and a parish hall procured in 1969. The hall was a structure that the ES&A Bank had used temporarily and it was moved to the OLA property. Father Bracken’s term as parish priest was a time when the physical appearance of the OLA church and school property changed profoundly. By 1974 OLA was firmly established as a vibrant parish, serving a district that had grown quickly as the baby boomer generation matured. During this time two young men from OLA parish joined the priesthood, much to the delight of Fr Bracken and parishioners. Robert McCulloch became a Columban missionary priest who served in Pakistan for thirty years and is now in Rome, while John Rate joined the Missionaries of the Sacred Heart Order and worked in many Australian parishes, including Henley Beach in SA where he is now. Both went to St Bede’s for secondary education and, after ordination, both returned to celebrate their first Masses at OLA. which had played a large role in the foundation of their faith. In 1983 Sister Geraldine Lannan was professed as a Brigidine Sister, the first from OLA. Geraldine was educated at Kilbreda and now works with disadvantaged people in inner Melbourne. Sue Phillips is the Superior of the Franciscan Missionaries of Mary and is currently in Rome.

Father Bracken was moved from OLA in 1974 and replaced by Father Bill Pietzch who served the parish until October 1987. During Fr Pietzsch’s time as parish priest, the Exodus Hall and the Scout Hall were completed in the few years after 1975. It is well known that Fr Pietzsch was not popular with everyone, being difficult to understand and relate to on a personal basis. However, he worked hard for the parish and devoted much time to supporting the school and its pupils. Towards the end of his term, he became very ill and died not long after retiring from OLA. 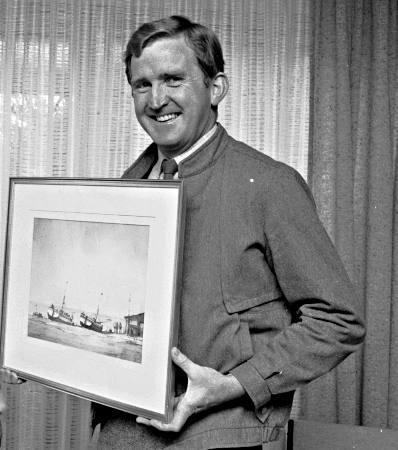 From the 1960s till the 1980s, OLA had quite a few assistant priests who worked with the PP at a time when priest numbers were greater. They were: Fathers Tom Doyle, Paul Costigan, Brendan Dillon, Tony Spierings, Bob Coghlan, Brendan Lane, Greg Trythall, Bill Van Kooy, Steve Sas, John Scarborough, Dan Conquest and Charles Mayne. During this time many families worked with the clergy to develop OLA as a stable parish. Foremost among many family names were two Smith clans, Chapman, Ring, Mahy, Green, Kelly, Hallinan, Hall, Jelleff, Killen, Canny, Noble, Robins, Short and Sullivan, among many others.

In October, 1987, Father Frank Martin became OLA’s parish priest and remained in that job for nearly twenty years. He had been Director of Catholic Education and had worked in that role during the Whitlam Government’s creation of the Schools Commission with its large rise in funding to all schools and a great boost to Catholic education. At OLA, Fr Frank found a need for a thorough overhaul of parish facilities and organisation. The parish funds were run down and the weekly revenue paltry. Fr Martin claimed the church was the worst he ever said Mass in, draughty and noisy, with no windows that could be opened. He was faced with a massive building program as five new classrooms were needed to cope with the growing school student numbers. Frank called meetings of parishioners and a plan was drawn up to revitalise the parish property.

Jack Clarke, who had been a star Essendon VFL player in the 1950s, was appointed as architect and the new church was planned and built. It had a revolutionary system of computerised projection of prayers and other data on to a screen or the plain wall above the altar, so that during Mass the people could easily join in and follow the service. The building was so shaped that there was an intimacy, as even those at the back of the congregation were not very far from the altar. Archbishop Frank Little blessed and opened the church on July 7th 1990. Jack Clarke also arranged for the old church to be renovated and turned into eight classrooms. From that time the school has been served by dedicated principals: Leigh Scanlan, Jane Flannery and Leonie Young, along with many other teachers. 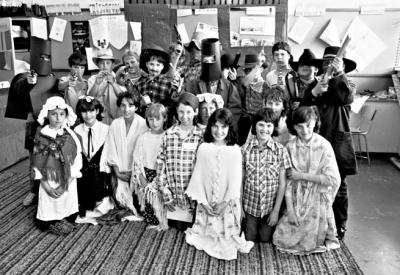 During Frank Martin’s long stint at OLA, that ended in 2007, he was supported by many people. He specifically recalls the help given by several women in various roles. Pastoral Associates, Sister Catherine Burke and Anne O’Brien, were vital in running the parish. There were also Anne Maree Eddy (psychologist and counsellor), Helen Mangan (pastoral associate), Cath Drury, Chris Eble and Ursula Hoey. Maureen Steele served in the Parish office for about twenty years. Of course there were many other women and men helping as well. For some years, beginning in Frank Martin’s time, Frances North has been a pastoral associate who now gives Father Peter immense support in many ways, taking pressure off him when functions and general parish business have to be dealt with. Frances is very hard-working and seems to be constantly on hand when decisions need to be implemented. All this she does with a gracious smile and a demeanour that calms people who may be on edge. 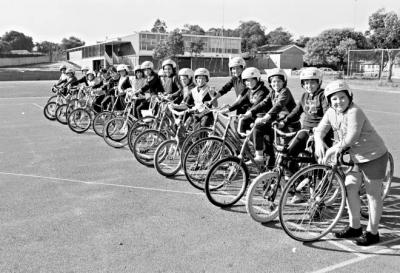 Pupils from OLA primary school in Cheltenham lined up on the bicycles during a bicycle safety program.

In 2007 Father Peter Matheson became OLA’s Parish Priest after Frank Martin did some work behind the scenes to ensure his replacement would be someone his Cheltenham parishioners would respect and relate to. Since then OLA people have appreciated the choice that Father Frank and others made. Father Peter quickly settled in to conduct parish Masses and celebrations with a no-nonsense common sense approach. He greets everyone with a friendly smile and an obvious interest in what people are doing, or what concerns they have. He starts his homily each Sunday with an unsensational comment on local or world events of the day, and then cleverly puts a Christian theme into the context of what happened. Then the sermon follows, with a moral message. Father Peter has continued to protect the ethos of OLA, including its freedom from pomp and pageantry. Clearly, he is admired and treated as a friend by parishioners, and one feels that Father Peter enjoys being in his current job.

OLA has a culture that is quite different from many Catholic parishes. It attracts people from outside the Cheltenham suburban boundaries, a fact that the parish coffers benefit from. The St Vincent de Paul Society in the parish is known widely for help given to people in need and its membership is not confined to OLA parishioners..

There are several parish offshoots that people enjoy. These include the card-playing groups, monster fetes, meetings of special interest groups such as the Seniors Group, and a regular twilight golf day. Much of this relaxed and friendly atmosphere can be attributed to the role Frank Martin played establishing a parish culture during his two decades as Parish Priest. It is good to go to such a happy place each week.