Aerial view of the mouth of the Patterson River as it enters Port Phillip Bay, 1978.

Prior to the arrival of the Europeans the Carrum Carrum Swamp was shared by the Bunurong people. It was first surveyed in January 1866 by T E Rawlinson followed by another survey in 1869 by Hodkinson and Couchman. The authors of the second survey noted the rich soil and recommended that the land be opened up for agricultural usage. This was done in 1871 but the successful selectors found themselves not only attempting to meet the conditions of their land grants but also ridding their allotments of excess water. 1 A solution to the latter problem was seen to be the creation of a channel cut through the sand ridge bordering Port Phillip Bay to allow the unwanted water to escape. A thirty three foot wide cutting was authorized by the government, completed in August 1879 and subsequently named the Patterson River.

Not all members of the government were in favour of cutting an outlet to the bay to allow excess swamp water to escape. Thomas Bent, as Minister for Railways, was strenuously opposed to the proposal and a few landholders near Frankston were against it because they thought the outlet would denude them of their water supply from the Kananook Creek. Their opposition delayed the project for almost three years. Others believed the opposition was simply a grudge against the Dandenong Council and took the position that the Council engineer would know best because he had local knowledge. The siting of the cutting was considered admirable, even though it meant cutting through a high ridge of sand, as the new drain or creek would facilitate the removal of a large proportion of the storm water which accumulated in the swamp making the land unavailable for cultivation. 2

The contract for the construction of a cutting nearly a quarter of a mile long with a section going through a sand ridge 72 feet wide and 23 feet deep was given to H Powis. The cutting was made along the shared boundary of the selections of Mark Young and James Nixon. 3 4 At first it was not intended to line the sides of the drain but the necessity for this was soon apparent as the flood waters of the Carrum Swamp made their escape into Port Phillip Bay scouring the sides of the cutting. The contract price accepted by the Shire of Dandenong in January 1879 for the project was £1167-5-0 but the price escalated with the cost of cladding the banks.5 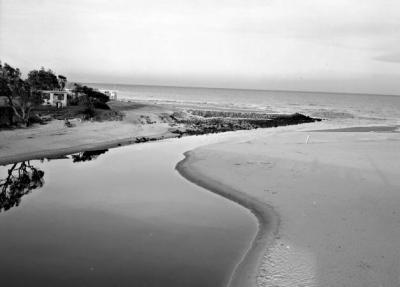 Patterson River Carrum, north bank looking towards the mouth which is narrowed with silt.

Less than two years after the completion of the cutting heavy rainfall and a massive rush of water carried away a wooden bridge erected to facilitate movement between the south and north of the cutting, as well as removing a large quantity of soil from both embankments. An emergency public meeting was called to determine what action needed to be taken to rectify the situation. At the meeting, held in the shire hall, Mark Young expressed his belief that the government would take some action to restore the former arrangements even if initially it was a temporary measure. Mr Fletcher who was a member of an early deputation to the Commissioner of Public Works opposing the cutting of the drain, proposed that the outlet should be blocked and the head of the Kananook Creek should be cleared out and extended as it was the natural outlet of the swamp. The meeting resolved to bring before the government the urgent necessity to have a permanent solution that would take into account future requirements. 6 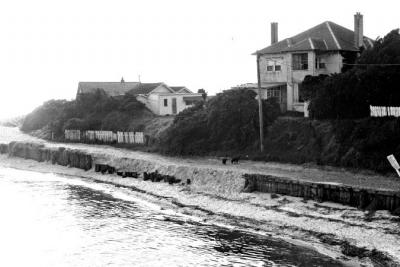 Erosion on the banks of the Patterson River, 1974.

The Minister of Public Works commissioned three individuals to inspect the channels in which the flood waters accumulating on the Carrum Swamp make their escape into Port Phillip Bay. 7 In their unanimous report they stated it was inadvisable to close up the Carrum outlet through which the swamp waters were discharged into the bay. The alternative of extending and enlarging the bed of the Kananook Creek for a distance of five miles would entail considerable cost. They also suggested preventative measures should be taken to prevent the sides of the cutting from being washed down and widened any further by the action of the sea or flood waters. Thomas Bent read the report and added the comment to the file ‘I suppose I must agree to it as those gentlemen have reported, but I am still of opinion that they are wrong.’ 8

A reporter from a local newspaper while acknowledging that the cutting had been a decided success in the sense that it had provided a speedy outlet for swamp waters ‘this was more than completely balanced by the fact that the combined forces of the flood waters, the tide and the wind acting on the friable soil, will cause the opening to increase annually so that in all probability in the course of a few years, instead of a river there will be a vast bay. … It must now be clear to the most ardent admirer of the scheme that a mistake has been made, and hence the prevailing idea should be to rectify it.’9 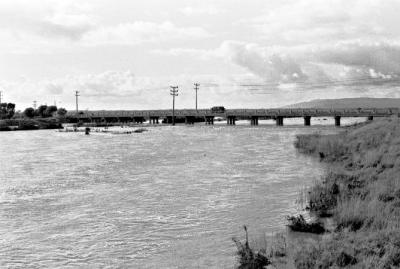 Twenty years later, in 1901, it was reported the Carrum Creek had taken on the proportions of the Yarra River and was broadening with every winter rains. The original outlet of several feet was estimated to be 200 to 300 feet across but it was predicated it would not be further enlarged. 10 Silt, erosion and sand banks proved to be an ongoing problem with the river for residents and the Carrum Irrigation Trust. In 1902 a petition signed by nearly a hundred individuals and organized by Commissioner William Black of the Trust for presentation to government argued for improvement to the Outlet. The main problem was seen to be the existence of sand bars at the mouth of the Patterson River which hinder the ready access of excess swamp water to the bay. The Patterson River was constantly silting up and through wind and tide action sand was blocking up the outlet forcing water to back-up and inundate large areas of valuable arable land. 11 The problem with the Patterson outlet was again raised in a petition to the Minister of Public Works in 1914. The solution was seen to be dredging at the entrance to the river and putting installing some sheet piling to promote proper scouring and so protects the entrance from silting up. 12 Eight years later representative of the Carrum Borough and the Foreshore Trust asked the Minister of Public Works for assistance in the construction of a stone groyne at the mouth of the outlet to prevent erosion to the foreshore and private property. 13 In 1923 there was a phenomenal downpour of rain which caused flooding in some places but the Patterson River did not overflow its banks and within twenty four hours the excess water had disappeared. Yet two years later action was taken to deepen and widen the Patterson River with the object of permitting a larger volume of excess inland water to escape. 14 But this improvement to the outlet did not save the district from massive flooding in 1934. 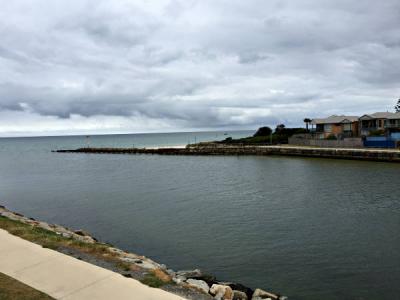 In November of that year a divesting storm swept Port Phillip Bay bringing torrential rains , wild seas and subsequently, massive flooding to large sections of Chelsea, Carrum and beyond. At the beginning of 1935 it was realised that further erosion had occurred round the Patterson river railway bridge forcing trains on the seaward side to proceed at a crawl. The storm had left the river much wider than previously and waves were now reaching the bridge at high tide. 15 This situation stirred the local authorities to approach the Ports and Harbours Department to carry out sheet piling work to protect the banks and to maintain deep passage for boats at the mouth of the river. The Carrum Foreshore Improvement Committee wanted work down on the mouth of the river which was silting up. 16

Flooding occurred again in 1952 although the water quickly subsided not reaching the heights of 1934 nevertheless it caused inconvenience to about 1200 individuals. 17 The local member of the State Parliament, David Lean, announced in March 1999 that the problem of flooding would be beaten with the building of a Secondary Drain Pumping Station to disperse water from properties between the Mordialloc Creek and Patterson River. 18