Mordialloc Bridge Across the Creek

Mouth of the Mordialloc Creek with the Bridge Hotel in the distance and the sports ground on the left.

Richard Howitt in recording his walk from Melbourne to Western Port and Cape Schanck in 1845 1 noted the eight or nine mile section between Brighton and Major Fraser’s Squatting Station near Mordialloc Creek describing it as ‘sandy bush, thinly wooded with wild cherry, banksia, she and forest oaks, and three kinds of eucalyptus trees.’ Wishing to cross the Mordialloc Creek he was advised to ‘turn back to the bay, and there to wade through a salt water creek, more readily to be crossed there as it deepened and spread wider inland.’ He did this as there was no bridge across the creek at that time. A wooden bridge was subsequently built across the creek, facilitating movement of people, stock and produce along the Western Port track, later called Point Nepean Road.

Tenders were called in 1853 by the Office of the Inspector General of Roads for the erection of a Mordialloc bridge according to given specifications but there was a warning that the Central Road Board would not necessarily accept the lowest tender or any tender at all. 2 Alfred Howitt, Richard’s nephew, wrote of wading his horse across the Mordi Yallock creek in 1854 because the new bridge being built, like most other government works, seemed to be in a languishing condition with only a man, a boy and a woman working on it.

After several decades complaints about the suitability of the constructed bridge were being voiced. The Mordialloc Progress Association argued in 1909 that urgent attention needed to be given to the bridge as it was too narrow and during holidays it became too congested. Mordialloc, they believed, deserved something more substantial. Cr Mills, of the Moorabbin Shire Council, called for a report from the engineer about the condition of the bridge because he did not believe much could be done while the bridge was in a safe and sound condition. 3

Discussions about the bridge continued in 1910. State Rivers and Water Supply Commission spoke with Moorabbin Council about widening and lengthening the bridge because they understood the Council was considering such actions. The Council responded that they did not plan to do anything with the bridge but wanted to know precisely what the Commission was considering. 4 Two months later the Commission told Council that they intended to lengthen the bridge by two spans of 12 feet each, a proposal that was not well received. Cr Francis Le Page said the bridge was so narrow that on holidays it was a source of danger to pedestrians and in his view if the bridge was lengthened the danger would be increased. He argued the bridge needed to be widened. 5 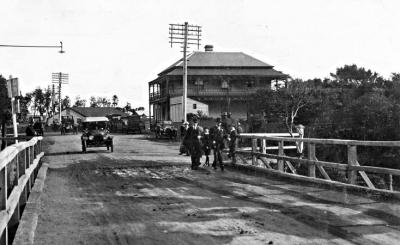 The old wooden bridge over the Mordialloc Creek, Bridge Hotel on the right, c1918.

Discussions about the condition of the bridge continued until November 1910 when the Public Works announced modifications to be made to the structure. To the surprise of the residents the width was to be left unchanged while the length was to be increased by 26 feet. There was scarcely sufficient width for vehicles to pass and the danger pedestrians were exposed to from motor cars was considerable. Given this situation, the Moorabbbin Shire and the Dandenong Shire decided they had to act and jointly resolved to construct footpaths for pedestrians on either side of the bridge. 6

In April 1912 a deputation from Moorabbin and Dandenong Councils met with the Minister of Works, Mr Edgar, to press their case for a new bridge. They wanted the government to pay half the cost for the construction of a reinforced concrete bridge costing an estimated £1,650. Mr Edgar promised to give the matter consideration. The deputation also suggested that the Commonwealth Government might be convinced to contribute towards the cost as the bridge was used by troops going into camp in Langwarrin. 7 The Moorabbin Council had declared the bridge unsafe and warned motorists and drivers of vehicles that they used the bridge at their own risk. On closer inspection the bridge proved to be beyond repair, making the building of a new bridge essential. Cr Groves of Dandenong assessed the government’s contribution as useless and paltry and if they didn’t make a better offer the councils would let the bridge fall rather than attempt to repair it. 8

In March 1914, the Council, disappointed with the Government’s offer, approached the Country Roads Board and asked them if they proposed re-building the bridge. 9 The Board responded informing the councils that their attention was focussed on the reconstruction of the road on either side of the creek and as soon as that project was completed they would give the issue of the bridge some consideration. 10 The two councils were disappointed by this response although Cr Scudds of Moorabbin was confident that the bridge would be rebuilt by the Board. He did not believe it was reasonable to make the road on each side of the bridge and leave the bridge as an unmade gap. But until this happened the Council was patching up the bridge with little pieces of wood. 11

Responding to the repeated demands of the two Councils the Board announced in September 1915 that the dangerous and condemned wooden bridge over the creek was to be replaced shortly with a reinforced concrete structure at an estimated cost of £1,500. 12 In February the following year Cr White deplored the Board’s inaction towards reconstructing their bridge and informed his colleagues he had sent an expert carpenter and bridge builder on three occasions to make urgent repairs to the bridge which was in a most dangerous condition. 13 It was not until seventeen months later that the Board announced that the amended plans for the bridge had been completed revealing an increase in cost to £2,800 due to the rising price of steel and extra cost for timber. 14 The three participants in the project, two Councils and the Board, each took responsibility for one third of the cost. 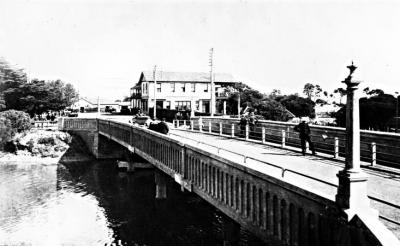 Mordialloc people and guests gathered on 10 December 1919 to celebrate. At last they had a new bridge straddling the creek. Politicians came from Melbourne. The contractor, Mr Irwin apologized for the long delay in completing the job but pointed to the troubles and difficulties he faced in building it. He said it had been a challenge to turn the false bottom of the creek into something which would carry a structure sufficiently strong to bear the immense traffic that it was expected to serve. Frank Groves cut a ribbon with gold mounted scissors and formally declared the bridge open to traffic. Brief and appropriate speeches were made and those present adjourned to the Bridge Hotel for refreshments. The proceedings were short as the politicians present had to return to parliament to attend to important business but mention was made of the energy and ability that ex-Cr White of Moorabbin Shire Council displayed in fighting for the bridge. 15

Within ten years, criticism of the design of the new bridge emerged. It was too narrow. It was scarcely wide enough for two cars to pass. For safety reasons motorists were forced to travel slowly causing congestion. At times traffic was held up for a distance of a quarter of a mile from the bridge. These problems were voiced often at Mordialloc Council meetings but nothing was done because of the heavy cost of alterations. Mr Rees of Mordialloc had a solution. He suggested removing the footpaths on the bridge and using the space to widen the carriage way. For pedestrians a suspension footway supported by iron girders could be constructed beside the bridge at comparatively little cost. However, the proposal was not taken up by the Council except to forward Mr Rees’s letter to the Country Roads Board. 16 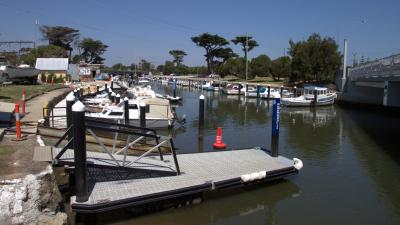 Local attention on the Mordialloc Creek Bridge over the next few decades lessened and was redirected to advocacy for a new railway bridge over Nepean Highway north of the township. This bridge, because of its age, the nature of its construction and location, was seen to pose great dangers to motor traffic 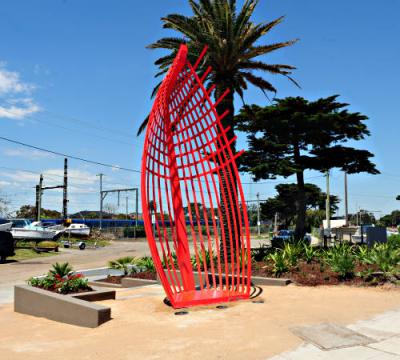 It was early in the twenty first century that attention was again on the Creek Bridge. The Minister for Public Transport, Peter Batchelor, announced a $8.2 million project to widen the Mordialloc creek bridge in response to road congestion. 17 The project involved the reconstruction and widening of the bridge to two lanes in each direction, and pedestrian facilities, pathways and fencing on both sides of the bridge. 18 Four lanes of the bridge were opened to traffic in 2008 with some lanes being closed temporarily to allow construction to continue. This latter action caused frustration for some drivers.

During the course of the bridge’s construction the idea of naming it the Pompei Bridge was discussed and resolved through consultation amongst the Kingston Council, Vic Roads and the office of the Minister of Roads and Ports. This was implemented in April 2009, in recognition of the Pompei family having used the site adjacent to the Mordialloc Creek for a boat building business for generations. 19

The site occupied by the Pompei Boat Shed was named Pompei’s Landing and it was there that Artist Julie Squires was commissioned by the Kingston Council, with the support of Pioneer Electronics, to erect a unique sculpture that reflected the boating history of the creek. 20 The tall red skeleton-like sculpture was unveiled in 2010 by the Mayor of Kingston, Cr Staikos, in the presence of councillors and children from Mordialloc Beach Primary School and St Brigid’s Primary School.