Erosion and Dredging of Patterson River 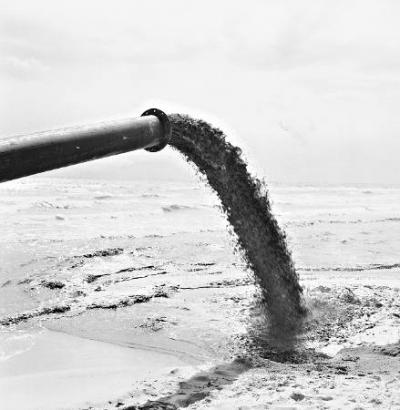 Dredging at the Patterson River, 1978.

Patterson River was created in 1878 when a cutting was made through the sand ridge to allow excess water trapped on the Carrum Swamp to escape into Port Phillip Bay. Almost from the time of its inception the problem of bank erosion and silting was present. The wooden bridge across the cutting was swept away by flood waters in 1880, not long after the outlet was officially opened. Not only was the bridge washed away but considerable damage was done to the embankments. 1 In a report delivered to government by three engineers, it was explained that two bridges should be built over the cutting, one for trains and one for road traffic. In addition, action should be taken to prevent the sides of the outlet being washed down or widened any further by the action of the sea or flood waters. 2 The three engineers warned that the combined forces of the flood waters, the tide, and the wind acting on the friable soil would cause the mouth of the cutting to increase to such an extent that, in a few years, rather than having a river there would be a vast bay. 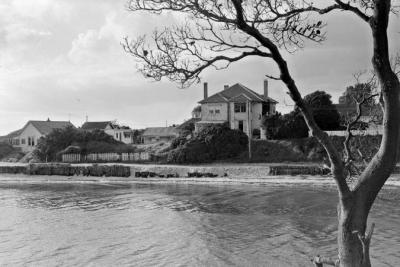 Erosion on the banks of the Patterson River, 1974.

As a result of a flood in 1891 the outlet was further enlarged changing the dimensions significantly. What was originally a few feet across became two hundred or three hundred feet. A correspondent, writing in the Moorabbin News a few years later, confidently predicted that there was no likelihood of it being further enlarged. 3 In 1902 a petition was organised by Cr Black for submission to parliament complaining about the constant silting up of the outlet to the Patterson River. The varying winds from the north west and south west were causing sand to bank up and almost completely block the exit of waters draining from the Swamp into the Bay. 4 Five years later the Patterson River was completely blocked at its mouth. The water in the river was backed up, all drains were filled and water was reaching back into cultivated land. In this instance, for approximately two hours, two local residents attacked the sandbank lying across the mouth of the river with spades to successfully release the pent-up water. 5 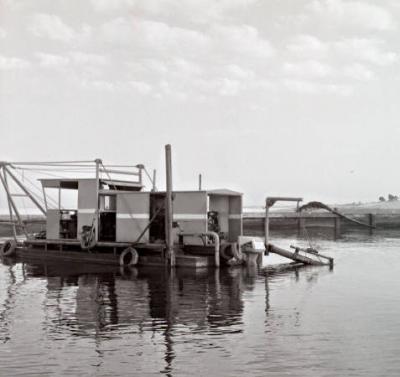 A dredge working from the mouth of the Patterson River, pumping and on to the beach.

Siltation was again of concern to farmers, and property owners on the Carrum Swamp in 1914. A petition to the Minister of Public Works pointed out that the river was rapidly silting up owing to a sand bar having formed across its mouth. The flow of water into the Bay was inhibited and as a consequence water was invading the lower lying land and depositing silt, making the land useless for farmers wishing to grow crops. C W McLean, a local resident but former engineer with Ports and Harbours, believed some dredging needed to be done at the entrance to the river and installation of some sheet piling that would facilitate proper scouring and protect the entrance from silting up. 6 Eight years later representatives of the Carrum Borough Council and the Foreshore Trust waited on the Minister of Public Works in an attempt to gain Government assistance in the construction of a stone groyne at the mouth of the Patterson River to prevent erosion to the foreshore and private property. 7 A short time later the State Rivers and Water Supply Commission were documenting water levels of the river in preparation for deepening and widening the river and the construction of embankments. 8

The Chelsea Council persisted in their efforts to have the relevant authorities address the silting problem of the Patterson River. The flooding of 1934 caused serious erosion of the bank of the river, tearing approximately one hundred feet away. Further erosion occurred in 1935 leaving the river much wider than before, allowing waves to reach the bridge at high tide. 9 In 1936 council was asking the Ports and Harbours Department to dredge the mouth of the river and to carry out sheet piling to maintain a deep passage for boats at its mouth. In arguing their case they pointed out that the river could be converted into a beauty spot and if there were a clear passage for boats it would become a popular place for amateur fishermen. 10 Towards the end of the 1930s a plan was developed to solve the erosion problem. It involved the placement of timber sheeting along the northern bank to prevent erosion, stone beaching of the bank at the bridge abutment, construction of stone beaching at the mouth of the river and building timber groynes and brush fences along the foreshore adjacent to the river mouth. 11 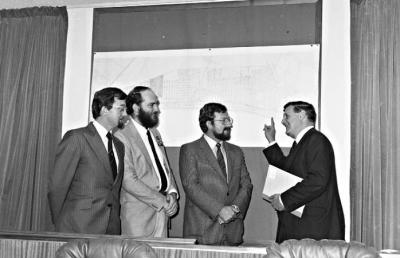 In 1946 the possibility of securing a permanent opening at the mouth of the river was explored at a conference of engineers and Chelsea Council 12 while the following year saw the announcement of an ambitious plan for the Patterson River. It was acknowledged that at the outlet of the Patterson River the carrying power of the stream was lost by the confluence of tides, and the interference by shallow waters. As a result deposits of sand were occurring which in time would accumulate sufficiently to form a sand bar completely blocking the stream flow and returning the area behind the sand ridge to swamp lands. 13 The solution to this situation was seen to be the provision of an outlet for the river beyond the shallow water or beyond the influence of the shore deposits or currents. The Minister of Public Works assured the Chelsea Council that if a permanent solution could be found the State Government would see it implemented. As a consequence of this decision the river outlet was sheet piled to a point beyond the third sand bank. 14

A plan to dredge the river was put into action in the Summer of 1982 with the excavated material being placed on the beach where it decayed causing a foul stench generating a great nuisance to local residents and beach users. After representation from local politicians 15 the Minister of Public Works intervened, stopped the dredging, and established the Patterson River Dredging Advisory Committee to advise him on dredging operations. The committee presented their report to the Minister and as a result stringent conditions were brought in for 1983-84. 16

A new contract for dredging was signed listing conditions agreed by all involved parties, residents and council. Cr Lack the chairman of the Patterson River Recreation Area Management Committee, the committee which controlled dredging, said, 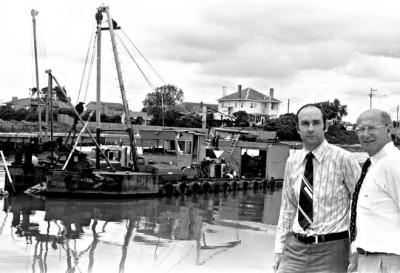 it was inevitable that dredging must occur because of land movements but given this fact it was essential that dredging be managed in such a way that minimal nuisance is created and carried out when residents will not be affected or use of prime beach areas curtailed. 17

Firstly, no dredging was to occur from 19 December 1983 to 6 February 1984 except if an emergency closed the channel to less than 20 metres wide and 1.25 deep. Secondly, in the period 7 February to 31 March, minimal dredging may be required but dredged material must not be deposited on beach areas. Thirdly, dredging on weekends, public holidays and prime beach days was forbidden unless the channel was closed. 18

Silting of the river and the need to dredge continues to be an issue today for the Kingston Council and local residents.