On 16 November 1876 the Railway Construction Bill, introduced into the Legislative Assembly of the Victorian Parliament, made provision for the construction of thirty two new lines including one from Caulfield to Mordialloc. 1 The Mordialloc line was officially opened on 19 December 1881 at Mordialloc in the presence of a large group of politicians, distinguished guests, local residents and children. The route it followed was not as originally planned causing substantial additional costs and frustrating land owners and speculators. The implemented route commencing at Caulfield proceeded south in a reasonably straight line until it reached South Brighton (Moorabbin) where it darted across Point Nepean Road (now Nepean Highway) and tracked on the western side of that road until it reached close to Mordialloc where it recrossed Point Nepean Road to resume its eastern orientation. This route was controversial for several reasons including the additional costs it incurred. Provision had to be made for twenty two road crossings with gate keepers contrasting with the original six. 2 One of these crossings was to the north of the Mordialloc township.

In the late 1890s, the Railway Department announced a project to regrade the railway line between Mordialloc and Mentone. The project included building a railway bridge across Point Nepean Road. To allow the work to be carried out a temporary line was constructed for about a quarter of a mile leading into the Mordialloc station. A local newspaper reported that on Sunday 12 April 1896, between 12.30 a.m. and 9.30 a.m. the rails and sleepers of the old line were bodily shifted on to the temporary line. The task was carried out successfully by about sixty men allowing the first up-train to Melbourne to travel safely over the temporary line. 3 Eighty men were to be engaged to construct the bridge over Point Nepean Road.

Two months later, Cr Maurice Benjamin from the Shire of Moorabbin met with Engineer Norman complaining about the delay in completing the bridge over Point Nepean Road. Benjamin pointed out that the stoppage of traffic was detrimental to the citizens of Mordialloc. He said that no work had been done on the bridge for six weeks. Norman explained that a contractor had failed to supply the large piles to be used in the construction of the bridge but a railway officer had been sent to Gippsland to obtain the necessary material. Work on the bridge, Engineer Norman assured Cr Benjamin, would be commenced and finished in the quickest possible time. 4 The new bridge was completed and opened to traffic on 15 August 1896 with trains passing over it and the new portion of line without a hitch. 5

Thirty seven years after its completion the bridge was being labelled a hazard and a dangerous bottle neck. The bridge, a trestle structure on huge wooden pillars, crossed Point Nepean Road abruptly at an angle allowing only one car to pass on either side of the pillars. The view of motorists was obstructed by a high railway embankment and had to contend with heavy traffic, especially during holiday periods, forcing them to travel very slowly. The Royal Automobile Club of Victoria and residents were urging the Mordialloc Council to take action on the matter but the Council pointed out the construction of a new bridge was the responsibility of government. However, the Council did paint the pillars and the walls of the bridge with white paint to minimise the risk of accidents, as many serious crashes had already occurred at this spot. 6

It was not until three years later (1936) that the Railways Department invited representatives of Mordialloc Council to meet with their officers together with representatives from the Country Roads Board to discuss action to be taken about the bridge. The Mordialloc team consisted of the Mayor (Cr Edwards) and Crs Herbert, Woods and Benwell, but other councillors were urged to attend. Cr Blanche reminded his colleagues that the City of Mordialloc would not contribute to the cost of any bridge replacement. 7 The meeting took place with agreement being reached on the need for a new bridge, but discussion on the apportionment of cost was inconclusive thus making the possibility of a new bridge unlikely in the immediate future. 8

The estimated cost of a new wider bridge which gave better visibility was £17,000. The representatives from the Country Roads Board suggested a longer bridge at a cost of £30,000 which would enable the straightening of Point Nepean Road but the high cost led to the abandonment of the proposal. A further meeting between engineers from the Railways Department and the Country Roads Board was announced. 9

Despite the protests and agitation over many years by Council to the Railway Department the dangerous bridge continued to exist through to 1938. The Council were informed by the Railways Department that the Country Roads Board did not see its removal and replacement as a priority. When considering safety and convenience issues, the Board regarded the provision of graded crossings at certain existing level crossings on heavily trafficked roads to be more important than the bridge. 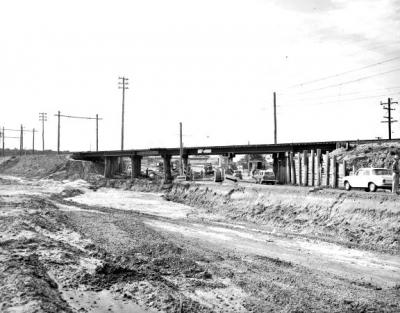 The Council found this response unacceptable as they regarded the bridge as a menace to traffic. They urged the Department to give the matter further consideration. 10 Almost three years later the Roads Board informed the Council that they would allocate £500 to the regrading of Point Nepean Road where it passed under the bridge and invited the Council to contribute to costs. This regrading was expected to improve the safety of motorists at a point which had been long regarded as a potential death trap. 11 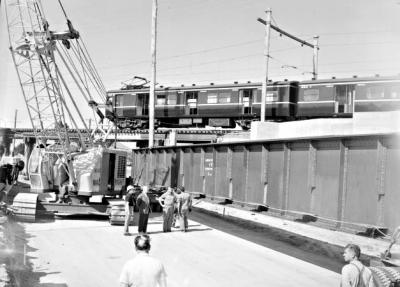 In August 1955, the Railways Department announced the closure of the road for a day to allow the completion of urgent repairs on the bridge. Concurrently the Country Roads Board informed road users the road would be closed for 22 days from August to September citing the same reason - urgent repairs. 12 Mr L Green of Mentone took the opportunity to denounce the bridge as the worst road trap between Melbourne and Mornington and argued it was ‘time to take out the upright in the middle of the road … which had over the years killed five or six people.’ He wanted a major reconstruction not a minor correction. 13

It was not until 1963 that serious action was contemplated by the authorities. On Tuesday 22 October the Minister of Transport, Mr E. Meagher announced the ‘Death Trap’ was to go. He said the project would remove one of the worst traffic bottlenecks in the State and one where two deaths had occurred in the previous four months. As part of the project a temporary railway track would be installed to divert trains to the west of the existing line and a temporary bridge would be built over the Nepean Highway. 14 The demolition of the viaduct or bridge began on 18 May 1964. The total project was expected to be completed early in 1966. 15 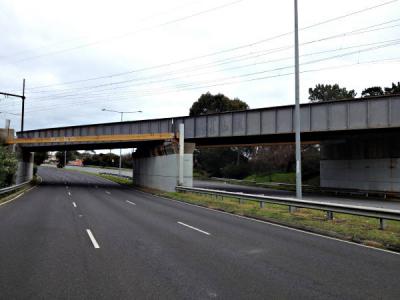 The building of the new viaduct was a challenge. The fabrication of the main steel girders for the bridge to span the Nepean Highway was the biggest fabrication project the Victorian Railways’ Newport Workshops had ever undertaken. Designed by railway engineers, the bridge was planned to be able to take the heaviest locomotive in the system. Cross girders and ancillary pieces were to be manufactured at the Spotswood Workshops. Each of the eight girders required to span the six lanes of road traffic were 91feet 11 inches long and 7 feet 6 inches high and weighed about 32 tons. 16

The Minister of Transport, Mr Meagher, Railways Commissioner Mr E. Rogan and several Mordialloc Councillors, plus a crowd of interested people, were present on 21 October 1965 when the first of the eight girders was placed in position. The firm of Walter H Wright was the contractor for this task. J. Emmins of Parkdale, the engineer responsible for the structural design of the viaduct, admitted the foundations of the bridge provided some of the toughest problems the Railways Department had encountered. He said that in many cases the pylons had to be sunk to more than 80 feet, a situation which was abnormal but necessary because of local conditions. Mr Meagher predicted that normal operations in the vicinity of the viaduct for both railways and roads would be achieved early in the New Year 1966. 17

The first Melbourne-Frankston train crossed the viaduct on Saturday, 18 December 1965 while the first up-train crossing occurred in January the following year. The Country Roads Board commenced work on the road in January 1965. 18