Mentone Railway Station, Melbourne platform erected in 1914 and in use 2017.

In 1881 tenders were called by the Government for the erection of wooden station buildings on the railway line being constructed from Caulfield to Frankston. The names of the stations were given as Glen Huntly Road, Warren Road, Whitmuir, East Brighton, Hythe Street and Cheltenham. 1 Seven days later the names Beaumaris and Mordialloc were added. 2 The name Beaumaris was no doubt selected because the line traversed land subdivided by Josiah Holloway named Beaumaris Town just south of Cheltenham. This land of 231 acres was originally granted to William Mitchell but sold to Holloway in 1853. 3 The Holloway advertisement for selling this land, described it as being near Brighton, and noted that it could ‘be hardly doubted there will be a Railway Station in the immediate vicinity.’ One subdivision plan of the town displayed a steam engine to reinforce the claim, almost thirty years before the station was built. 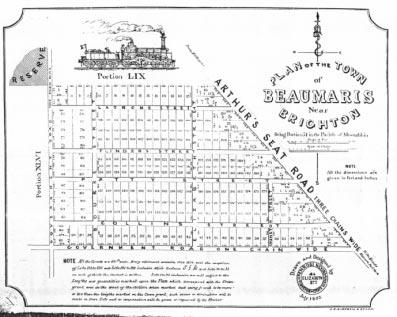 The Caulfield-Frankston line was officially opened through to Mordialloc on 19 December 1881 by the Minister of Railways, Thomas Bent. 4 At that time no station buildings had been erected on any station because Bent had refused to accept the successful tenders. However, platforms and sidings had been formed. 5

Subsequently, wooden buildings were provided at the station originally referred to as Beaumaris but renamed Balcombe Road. Less than twelve months later the word ‘road’ was deleted from the title. Balcombe was the man who had purchased a substantial amount of land to rest his cattle during their walk from Mt Eliza on the way to the Melbourne market. The station was to get another name change on 7 January 1884 after the Balcombe land was sold to Matthew Davies who subdivided it to create the town he called Mentone. 6

G L Headen noted the name change from Balcombe to Mentone in his correspondence to The Argus in September 1884. He complained about the continued use of old railway tickets, marked Balcombe because they were causing passengers to be carried beyond their desired destination, Mentone. 7

The wooden buildings first constructed on the Balcombe/Mentone platform were described some years later as temporary and very unsightly. 8 A deputation by a number of local citizens to the Railway Commissioners in 1890 urged the provision of better station accommodation at Mentone. 9 The deputation pointed out there was no reason for delay as £2,800 had been provided in the government’s financial estimates for such work. Mr Speight, the railway official engineer, agreed the need for the work was urgent and money had been allocated so he would argue that the work would be undertaken at once. 10

The Moorabbin News reporter writing ten years later in April 1900 commented on the unaccountable delay in the building program but welcomed the acceptance of the tender of Messrs Young Bros of Moonee Ponds and Glenferrie to construct the new station of handsome appearance, replacing the old ramshackle buildings and thus ‘provide a relief to the eye’. 11 The main building on the Melbourne side was to be 81 feet long, by 15 feet in breadth with a height in the clear of 13 feet, and include a booking lobby, stationmaster’s parcels and telegraph office, a general waiting and ladies retiring room with marble mantelpiece and lavatories. A verandah, extending 66 feet in front was built on the same principle as the new station at Cheltenham. On the down side, the building was to be 27 feet by 15 feet, with a booking office, general and ladies rooms and a verandah 66 feet long. The aim was to have the building completed by June 1900. 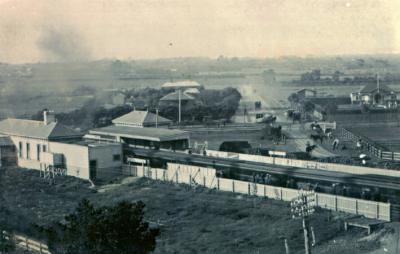 Almost three years after the completion of the new building at Mentone it was destroyed by fire. The alarm was quickly given at 2.30 in the morning of Friday 31 May 1913 when the crackling of burning timber was heard. The Mentone brigade arrived promptly with firemen Brown and Scudds attempting to control the flames. Brigades from Cheltenham and Sandringham also joined the fight but only with limited success. As a result of this action a small portion of the ladies waiting room was saved. The whole of the offices with contents were lost, including books, tickets, parcels, a little cash and some personal items of the station master. The interlocking gear was rendered unworkable and several detonators were discharged by the flames. 12 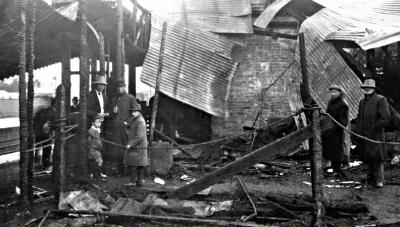 A gang of railway officials arrived in the early hours on Friday to immediately arrange temporary accommodation and replacement signalling gear. A local reporter said the destroyed building presented a ‘damaged appearance’ which he believed would be quickly repaired. He also believed it was time for railway officials to replace the weatherboard and iron building with a brick construction on an island platform. 13

Initially the cause of the fire was unknown but there were suspicious circumstances. On the same night that the station was destroyed the Mentone Catholic church was broken into and a box was prised open by means of a chisel. Similar chisel marks were found near a doorway of the railway station. The belief was that parcels had been stolen and the building was set on fire accidentally or wilfully. The police were investigating. 14 There were many newspaper reports of breaking and entering in the Mentone district under investigation. 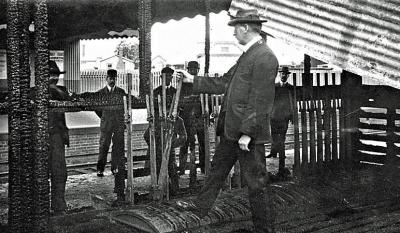 After some months members of the Mentone community began arguing for the replacement of their lost station as the temporary buildings they saw as very inconvenient. In July 1913 the Seaside News reported that the railway department intended to construct a new station nearer to Balcombe Road so that the gates could be better controlled and managed. No one was able to say whether the new station was to be constructed in wood or brick, the latter being the preferred option by many. 15 The Moorabbin Shire Council became involved, through the encouragement of Cr Scudds, writing to the railway department seeking information about the proposed new station and suggesting it should be in brick.

In August 1913 the council received the response of the Secretary of the Railway Department to their letter. The letter informed the council that the commissioners had considered their request that the new station buildings at Mentone be erected in brick and regret they ‘cannot see any justification for incurring the additional expense that would be involved in adopting the proposal.’ 16 A few days later the Seaside News learned unofficially that the new station, to be completed by December, was to be of wood, on the ‘same site as the previous station although somewhat larger’. A signal box was to be placed near Balcombe Road from which the gates at Balcombe Road were to be controlled. 17

The next month an irate correspondent to the Seaside News declared it was impossible to get the new buildings constructed by December and reminded readers that the station was burnt down six months previously with no action by responsible officers. 18 The newspaper reported that a Moorabbin Council meeting in November a letter was received from the railway authorities stating that the plans for the new station ‘would be available at an early date’. This information was received by the councillors without a smile amongst them. It was a statement heard before. What they wanted was a new station rather than words and promises. 19

In that same month Disgusted wrote to the local newspaper drawing attention to the disgusting conditions prevailing at the local railway station. ‘No self-respecting resident would use the buildings provided as an outhouse’, he claimed. ‘It was a scandalous insult to the progress of the seaside township.’ As a resident of twenty years who worked to improve the town he emphatically objected ‘to highly salaried officials ruining our efforts by such medieval methods’. He wanted to use more descriptive language in his statement but realised the editor would not print it. The editor of the newspaper supported the comments of Disgusted describing the temporary accommodation provided after the fire ‘an abominable inconvenient eyesore’. Moreover, he stated that the sheds provided breached both government law and municipal by-laws on building construction standards. 20

The next week Satisfied wrote in response to Disgusted’s letter and the editor’s comments. He saw the situation differently. He believed the railway authorities only had to provide reasonable facilities for the travellers and staff and this they had done. Wasting money on elaborate buildings was not desirable. He reminded people that the railway department was carrying out very extensive improvements throughout the State and therefore Mentone must wait its turn. The editor of the newspaper briefly defended his position pointing out that ‘cow sheds are not reasonable facilities for the department’s clients … the material in a portion of them is rotten, the small accommodation for the officials is ridiculous and almost criminal, so their work is scrambled through and the signal box is so far away from the telegraph instrument that they can easily forget what they went for. … six months is a reasonable time for a necessary work to be carried out at a station …’ 21

In January 1914 it was announced that authorisation had been given to proceed with the erection of new station buildings on the ‘up-side’ at Mentone. 22 These buildings are still being used in 2017.

An active local group successfully worked to have the station and the associated gardens listed on the Victorian Heritage Register. 23 In that listing the buildings on the two platforms were noted as ‘single storey timber structures with cantilevered platform verandahs constructed in what Ward and Connelly 24 described as the Gisborne Style.’ The site was rated as having State wide significance. The buildings were depicted as weatherboard with roughcast render above door height and half-timbered gables on the larger and more decorative upside platform buildings. Roofs and verandahs were corrugated iron sheet and the verandahs were faced with ripple iron valance.

Over the years the Mentone station has experienced minor modification. More recently the station faces more significant changes with the removal of the Balcombe Road crossing by the Crossing Removal Authority established by the State Government in 2015. 25 On 20 February 2017 the Minister of Public Transport, Jacinta Allan, announced the removal of three level crossings on the Frankston line, including Mentone. The platforms of the two affected stations will be built below ground level with the actual detailed design work continuing for some months. During this time the Minister indicates the local community will have the opportunity to put forward their ideas on urban design, landscaping, paths, parking and station design. She said ‘It’s part of our onging work to rid this city of our worst level crossings, and get people home safer and sooner.’ 26