Illegal starting price (SP) bookmakers operating race betting in mid twentieth century Mordialloc included a father and son who came to the attention of the law. [1]

Thomas Noel Kitchener Page, of Kensington, was called but failed to appear at the Mordialloc Court in 1957 before Mr Elvish S.M. He was charged by officers of the Special Duties Branch, under the Police Offences Act – firstly, that Page ‘did bet by means of another servant’ and secondly, that ‘he did procure the commission of an offence … by a man, name unknown, in that the man was in a footway at the rear of the Bridge Hotel, Nepean Highway for the purpose of money being received for betting purposes.’ [2] 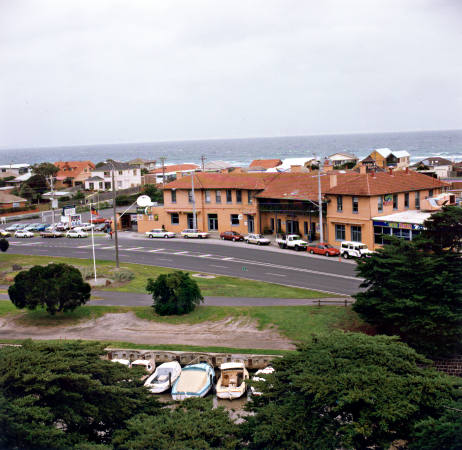 Constable Peter Harding told the court that on Saturday 18 May 1957 at 3.50 p.m. he went to an area at the side of the Bridge Hotel where a number of cars were parked and a group of men were gathered. The defendant, Thomas Page, was some distance away watching. Constable Harding explained that he met up with Constable Watson and Thomas Page’s son, Geoffrey returning to the police station. Geoffrey Page was questioned by the police regarding his aiding and abetting a street bookmaker near the Bridge Hotel.

While being questioned by the police, Geoffrey’s father ran into the station waving his arms and shouting at his son. ‘What have you been up to this time? Have you been fighting again? I’ll give it to you if you have.’ He was angry and using indecent language. Ordered to leave the station he continued to swear and wave his arms about.

Returning to the police station Constable McDonald told Constable Harding that Thomas Page had admitted he was the bookmaker behind the Bridge Hotel. Constable Harding then asked the elder Page if that was correct. He said yes and revealed he had been running the business for about seven years. On each race day he would hold about £800 in bets, making him the biggest bookmaker in Mordialloc. Thomas Page agreed that he had five ‘blokes’ working for him taking bets while he just stood around overseeing what was going on. Later, under questioning by police, he denied running a betting business or employing men.

Thomas Page complained of police harassment. On the day of the alleged offence Constable Millar agreed he was on the north bank of the creek, opposite the rear of the Bridge Hotel watching a man taking bets and recording the transactions from a large group of men. When, ten minutes later, Millar walked to the south bank and approached the group of men he heard calls to ‘dice it’ as the men dispersed. [3] At 2.50 p.m. when he walked down the steps to the creek bank he again heard the cry to ‘dice it’. Thomas Page said these intrusions were ‘costing him dough’. When police approached the group the betting record sheets were thrown into the creek, resulting in ‘blokes’ claiming they had backed winners. Page said he had to pay out £150 against these unsubstantiated bets and as a consequence of this loss he asked that the police leave him alone in the future.

At the court hearing, Mr Hedigan, Page’s legal counsel, argued there was no case to answer. The only evidence presented was an admission of employment. Senior Constable McKay, the police prosecutor, disagreed but the magistrate said there was no evidence of procuring so the charge was dismissed. He suggested entirely fresh information needed to be brought forward.