The Mentone railway station was established in 1881 with the construction of a platform to assist passengers join and leave the train but its history also includes crime and tragedy.

Julius Goldman, a dealer in jewellery, had his purse stolen during a crush at the station at five o’clock on the evening of 4 August 1891. He was robbed of two £5 notes, five £1 notes and £2 in gold coin. Two other train customers suffered losses of valuables some years later while visiting Mentone. William Ryan of Essendon reported to Constable Canty that his silver hunter lever Rotherham watch, a gold albert chain and a sovereign case valued at £18 had been taken from his person. Later that same evening John Carew, a tanner of Clifton Hill, told Constable Canty that his dark leather purse containing £4 in gold, plus two cheques worth £96/9/3 and £20/10/4 had been stolen. 1

The station office was also a focus for thieves because they expected to find cash being held there overnight. In July 1892 robbers broke into the office and attempted to remove the safe but failed. They had entered the temporary wooden building through the booking office section. 2 The local paper reported that several suspicious characters had been noticed hanging around the neighbourhood at that time.

Two years, later thieves were more venturesome using gun powder in an attempt to open an iron safe. 3 Two holes were drilled in the railway safe, one on the top and another in the door using a quarter inch drill bit. Gunpowder was placed in both holes and exploded but the safe did not crack. The thwarted robbers abandoned their tools but escaped with a revolver. Their tools had been stolen earlier from the blacksmith’s shop of J M Blackwood in Balcombe Road, Mentone. 4

The Mentone station was again subjected to breaking and entering by a gang of thieves at the beginning of 1900. It was believed the same gang later entered and acted in a similar way ransacking offices of the Cheltenham station. Parcels were opened and strewn about the room but the thieves appeared to take nothing. 5

In 1900 members of the local community welcomed the letting of the contract for replacing the original ramshackle building of Mentone station because it was believed the old buildings were a factor in attracting burglars. 6 Twenty five years later two young men, John Riley (17) and Steen Howie (18) were charged at the Cheltenham Court with breaking into the Mentone Railway Station and the Mordialloc Council Chambers. They were committed for trial but bail was allowed. 7

Robbers entered both the Mentone Post Office and the railway station in 1932. They successfully forced open the station’s iron safe and stole £13 that was held there, together with an automatic pistol. The thieves gained entry by smashing a glass panel in a door enabling them to operate the lock. 8 It was suggested that almost every week a suburban railway station safe was blown when stations were unprotected after midnight. 9 This was a time of economic depression and stress in the community with many men unemployed; perhaps some saw taking to crime to survive as an answer. 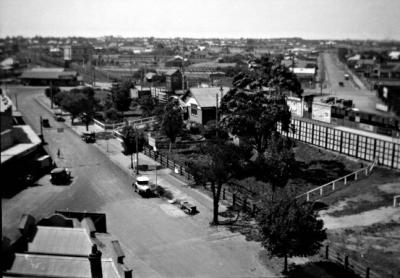 The sequel to the local break-ins came when three men were arrested at gun point by the crew of a police wireless patrol on Point Nepean Road (now Nepean Highway) near Moorabbin and charged with committing robberies at several post offices and railway stations, including Mentone. Those arrested were armed with fully loaded pistols as well as carrying an assortment of safe breaking equipment: sticks of gelignite, fuses, detonators and pieces of silk for packing explosives into key holes. Because they tripped an alarm connected to the Mentone police station, Senior Constable Drysdale was alerted that a robbery was in progress. He informed a police wireless patrol car that three men had been seen leaving the site of a robbery, jumping a fence and running across a paddock to reach a car in which they set off at a furious speed up Point Nepean Road. The patrol crew gave chase.

When the police caught sight of the robbers moving ahead of a line of market gardeners’ carts they refrained from shooting at them for fear of hitting innocent people. Fortunately for the police, the driver of the getaway car lost control of the vehicle, crashing it into a culvert. The occupants of the car then hitched a ride with John Everett a market gardener of Centre Dandenong Road, Cheltenham. Everett was most surprised when the police patrol pulled in beside him and ordered him to stop. The three passengers were instantly evicted from the van with two holding automatic pistols. One was quickly disarmed after a blow to his head. Another was persuaded to drop his pistol when he was punched on the jaw. The third man was also found to be carrying a loaded pistol which he surrendered. Later, James Banfield, (33) engineer, Ernest Jones (24) baker, and Stanley Raymond Stephenson (22) blacksmith, were charged at the City Watch House with multiple offences including possessing unregistered pistols, being in possession of a quantity of gelignite and other explosives breqaking into the Mentone railway station, and stealing £16/19/4 1/2 and an automatic pistol. 10

Shortly after 11 p.m. on 30 November 1929 porter Hector Penrose Dear was attacked by two men, Cyril Williams (20) of Charman Road Cheltenham and Mervyn Griffin (19) of Dandenong Road Mentone. Dear heard a noise in the Mentone subway and realised the light was out. Going to investigate he saw Griffin carrying a paling and asked him what he was about when he was struck by a fist. A struggle followed in which both Griffin and Williams hit Dear. Both men were charged at the Cheltenham Court with assaulting Dear and both were fined £5 each, or in default imprisonment for one month. Extended time to pay the fine was refused. 11

The Mentone station was also the site of some serious accidents, one on the station itself and the other at the crossing on Balcombe Road. Leslie Welsh, a porter at Mentone station, was wheeling along the platform a trolley loaded with potatoes and eggs when some of the load overbalanced. Welsh unsuccessfully attempted to correct it as the train was entering the station. His head was struck by the engine, the force of which threw him on to the line. 12 Severely injured, he died before reaching the Melbourne Hospital. 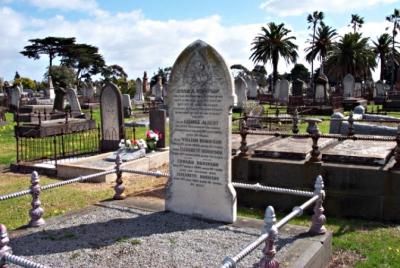 Grave of Jessie Robinson at Williamstown Cemetery, ‘Killed in execution of her duty at Mentone.’

Mrs Jessie Ann Robinson was the 55 year old gate keeper at Balcombe Road. She was run down there by a train and killed instantly on 14 March 1914. Mrs Robinson was a widow with three married children, had been employed at this Mentone crossing for 24 years but was about to take up a similar role at the other end of the station. Employees of the Colonial Ammunition Company had been attending a picnic and were about to return home on a train which had to be shunted from the down line to the Melbourne line to allow the embarkation of passengers. The train was in the middle of its shunt north of the Balcombe Road crossing when a motor car and horse and cart arrived wishing to cross the line. Obligingly Mrs Robinson thought there was time for them to cross before the train completed its shunt and opened the gates. She was wrong. The train, led by the guard’s van, returned while Mrs Robinson was attempting to close the gates to vehicle traffic. The Coroner returned a finding of death by misadventure. 13

These infrequent instances of criminal behaviour and tragedy occurring at Mentone station over many decades add drama and colour to the station’s history. They are probably unknown to the large numbers of travellers joining and leaving trains at Mentone today.