One of Australia's greatest female tennis players lived in Mentone when she was young and first came under notice playing as the partner of a local man, V.Worrall, when they won a mixed doubles event at a Mentone tournament in January 1932. The unlikely venue was Mentone Oval which hosted a similar tournament the year before. The local tennis club staged these big events after its members cut, rolled and marked a dozen courts on the cricket ground, located between Venice Street and Brindisi Street near the park. Despite the despair that many people experienced at this time, the tennis tournament was promoted eagerly. It probably helped people to have a pleasant break from the gloom of the Great Depression with its unemployment and poverty that ruined the lives of many in Mentone, its surrounding suburbs, and Australia as a whole. The tennis tournament was held after Christmas and the matches took place mainly through the New Year period. Local people gave many hours of their leisure time to have Mentone Oval neatly divided into many tennis courts marked with bright white lines.

That January there were events for players of both sexes in several age categories. Special championship titles were awarded to those who were top players, some of whom came from distant suburbs. Considering the social gloom of the time the Mentone planners were optimistic and visionary to organise such a tournament. Nancye Wynne, who lived in Florence Street, Mentone, was only fourteen years of age when she played in the Mentone Oval tennis matches in 1932, including the mixed doubles. In that event her partner was V. Worrall who did not have a high profile but must have been a good local player. Worrall and Wynne won 6-5, 5-6, 6-0. Nancye also won the mixed doubles for novices partnering another first- timer in Morris Caudwell from the Mentone timber merchant family.

Nancye was a physically strong young woman. She grew to be five feet ten inches tall and was athletic in her movement during sporting contests. In summer Nancye spent much time swimming at Mentone beach as well as joining in beach games on the sand. When she became a teenager, her parents, themselves interested in tennis, organised lessons for her in the city. She had regular coaching by a professional who had a venue for this on the roof of a big inner-city building. He actually had a bitumen court located above the busy city streets below. In this unusual arena she learned to play tennis more expertly and enjoy her games on local courts. So her success on Mentone Oval at the start of 1932 was no fluke.

During the mid-1930s Nancye developed her game and began to play regularly in local club events. She had begun school at Mentone Girls Grammar where her tennis skills were noticed. Nancye then went to Lauriston Girls School in Armadale after her early primary grades and this move ensured her tennis career would blossom. With coaching at school and on the city roof she began to show exceptional ability. As she grew into her later teenage years her parents supported her entry into top pennant competitions and this led to State championship events. In the mid-thirties Nancye's game improved as she played regularly in local pennant events and graduated to competition on a wider scale against players in tournaments around the State. Nancye did well against the best female players in Victoria and then in 1937, nearing her twenty first birthday, she became a national success by winning the Australian Ladies Singles title in Adelaide.

As the Australian champion Nancye was able to compete in other countries which brought many wins and participation in finals. The Wynne family was willing to support her travel overseas for tennis events. They also had the financial capacity to do this. By 1938 she qualified to play in the USA championships and boarded a ship to travel there with other Australian players. She did not let them down, being runner-up to Alice Marble in the prestigious USA Championships. Nancye Wynne was then rated among the 1938 top ten female players in the world. She kept that status when big tennis resumed in 1947-8. World War 2 had robbed her of the chance for many more top ten ratings in the early 1940s when tournaments were discontinued.

In 1940 Nancye had married George Bolton a RAAF pilot. The couple's only child, Pam, was born in 1941. George saw his daughter for only a short period because he was posted to England where he flew in bombing raids over Germany. Tragically, in 1942, his plane was shot down and he died. Nancye was heartbroken and began to bring up her daughter as a single mother. She never re-married. Major tennis competitions were on hold during the war so Nancye played in local social games on a casual basis. She also cared for her little girl, Pam, and did what she could to help the War Effort, a many-faceted government program to support our troops in Europe and then in the islands to Australia's north when Japan entered the conflict after attacking USA at Pearl Harbour in December 1941.

When big tennis events began again in the late 1940s Nancye was in the thick of it. During this period, and up to 1951, she won six Australian championships which was a record until Margaret Court exceeded that, eventually winning eleven. Nancye also teamed up with Thelma Coyne to win the Australian Ladies Doubles crown ten times, the final victory achieved in 1952. During this time she partnered well-known Davis Cup player, Colin Long, to win the Mixed Doubles Championship of Australia four times, so the late forties era was her heyday. 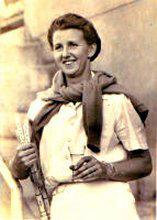 In September 1947 Nancye played in the USA championships, having qualified to do so as Australian Champion. She made the semi-finals and faced Louise Brough, a top American. Playing great tennis Nancye led at 5-2 and had match point on her serve. That crucial serve was returned by Brough and clearly landed over the base line by about a foot according to observers. The linesman failed to call 'out' and Nancye was very upset. Her game lost its sharpness and Louise Brough went on to win the final set 7-5. Brough won the final that, with better umpiring, could well allowed Bolton a chance to win a major. The headline in Melbourne's Sun newspaper read 'Mrs Bolton was 'Robbed' of Singles'. Nancye accepted the result gracefully and won many other matches on the American tour. She also visited Mexico where she won the Pan American singles and doubles. On her return home Harry Hopman, the force behind Australia's Davis Cup successes in the 1950s, wrote that Nancye was the leading female player in the British Empire and was ranked fourth in the world.

In 1951 Nancye spent over six months In UK and Europe. She lost to American player Doris Hart at Wimbledon in the singles, and with Mervyn Rose as her partner she reached the final of the Mixed Doubles only to lose to Doris Hart and her Aussie partner, Frank Sedgman. In other events Nancye did very well, winning singles and doubles tournaments in Norway, Sweden, Switzerland and Finland. In 1952 Nancye turned professional and set up a coaching business at Riversdale courts in Hawthorn. Many girls from private colleges such as Fintona, Strathcona, Genazzano and Lauriston attended her lessons at Riversdale and Nancye trained a new generation of female players. She paired Jennifer Staley, one of her students, with Lew Hoad in the 1955 Adelaide national mixed doubles and that partnership was an enduring success both in tennis and the personal lives of the partners who married in the late fifties. Years later Nancye was able to visit Lew and Jenny at their Spain property where they had established a large tennis coaching business that was a successful outcome of their tennis careers.

Nancye always enjoyed competition. In the early 1950s, having enjoyed a tennis career where she matched the world's best players, she joined Kew Golf Club and began another career. She soon became very skilful in this new field and reduced her handicap to single figures very quickly, playing off 4 eventually. She won her club championship trophy in 1955 for the first time. Her golf game improved to the point where she won the club championship seventeen times. Nancye played pennant golf in Kew's premier team for thirty years. She was a semi-finalist in the State Championship in 1955 and was still rated in the top few female golfers in Victoria in the early 1960s. By 1970 Nancye Bolton's name was also in the lawn bowls results where she was a competent player in her third sport.

In 1972, with her daughter Pam and her toddler grandson Peter, Nancye made a trip back to Europe to see Wimbledon and catch up with friends she had made in her younger days during the tennis tours. She saw Margaret Court and Evonne Goolagong play Wimbledon and was disappointed they both lost at the semi-final stage. She then toured Norway and marvelled at the winding route up the mountains that the small train took. There were many more miles of sight-seeing, a lot of them in Scandinavia. Nancye was helped greatly by her daughter, who was a reliable navigator. Back home at North Balwyn Nancye spent many years playing golf and bowls in the eastern suburbs. She also was fond of simply relaxing, usually on the back porch with a glass of sherry and a cigarette. She socialised with her many friends from her tennis days and her later life, always enjoying a good chat and the company of people she respected. She was awarded the Australian Sports Medal in 2000 and, a year later, Nancye was inducted into the Tennis International Hall of Fame. She passed away in 2001, aged eighty five.

p>My brief story of Nancye Bolton's life was written from information in her biography that was written by Warren Hill and Pam Stockley, her daughter. The biography is titled Nancye Wynne Bolton, An Australian Tennis Champion. The book was produced by Memoirs Foundation Inc. (Australia) See page 169 for highlights of Nancye Bolton's sporting career listed as follows: