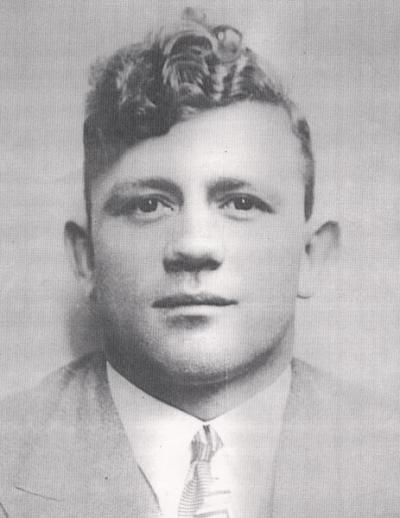 Australia has not produced many wrestlers who have had success on the world stage, in particular at the Olympic Games, where wrestlers from many countries compete in several weight divisions. The exception is Dick Garrard who was a lightweight and later a light welterweight contender. Dick competed in three Olympic Games: 1936 (Berlin), 1948 (London), and 1952 (Helsinki). He would have taken part in the 1956 Melbourne Games but dislocated his shoulder in a training bout before the Games began. Garrard's record is outstanding. Between 1926 and 1956 he competed in 526 bouts and lost only 9. During this period he won ten Australian titles and from 1930 until 1956 did not lose one bout. The strongly-built, athletic Garrard was physically suitable for wrestling, a sport that demands intense and lengthy periods of powerful body work.

Dick Garrard was born in Geelong in January 1911. As an adult he lived in Elwood for many years. He loved swimming and took part in bay swimming events that often took place at Mentone, Parkdale, and Mordialloc, probably run by the life-saving clubs or swimming clubs that existed for some years at that time. Dick was a good swimmer who entered the Mentone 'pier to baths swim' at least on one occasion. But Dick Garrard's main interest was in wrestling which became his main sport as he left his teens behind. He trained hard at city wrestling clubs.

Between 1930 and 1956, Garrard won every Victorian title in the light welterweight class. He was also successful nationally, winning the Australian titles in lightweight and light welterweight divisions, which he retained for a quarter of a century. In that period he did not lose one bout, indicating that he was by far Australia's most successful wrestler to that point in the sport's history here. Internationally, he had considerable success against men from countries where wrestling held a much higher profile than in Australia.

Garrard's international career began at the 1934 British Empire Games (now Commonwealth Games). He won a gold medal for freestyle wrestling and repeated that success in 1938, 1950 and 1954, the next three Commonwealth Games. He was flag bearer in the last of those Games. During this period, Dick wrestled at the Olympic Games at Berlin (1936), London (1948) and Helsinki (1952) without winning a gold medal. Garrard was set to compete at the Melbourne Games in 1956 but dislocated his shoulder in a pre-Games practice bout. His best result was to make the light welterweight final at the London Games of 1948, where some observers say he was not given a fair go by the referee in that final bout. Garrard was probably at his peak in 1940, but that year's proposed Games were postponed because of Hitler's war. When peace returned, Dick was in his late thirties, but he still won a silver medal in 1948. In the final that year he was beaten by a Turkish opponent. Some observers said that several of the referee's decisions seemed to unfairly favour Garrard's opponent. Dick never complained, remaining true to his reputation as a fair sportsman. 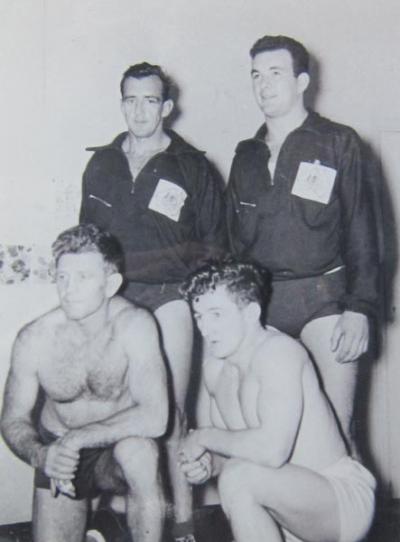 Four Australian Wrestlers competitors in Olympic Games. Front: Dick Garrard, John Elliott. Back: Bev Scott and Kevin Coote All were eliminated in their events but none of these wrestlers were pinned throughout their matches, 1952.

After returning to Australia after those Olympics in London, Garrard made many appearances to demonstrate wrestling holds and tactics. He visited sporting clubs and schools, especially in the bayside suburbs north and south of Mordialloc where he had family connections at the time. During the early 1950s, St Bede's College put on an annual boxing tournament for students, and the finals of various weight divisions were held at the City Hall in Brindisi Street near the Mentone Oval. In the centre of the Hall, a boxing ring was erected as a high central arena. A feature of the finals night was the appearance of invited professional boxers and wrestlers. Dick Garrard came a couple of times and brought other wrestlers, some of them from the Victoria Police wrestling team. Dick and these other performers would do spectacular moves sometimes where contenders would be thrown over the ropes into the ringside seats. Garrard seemed to be able to quickly pin an opponent who had to submit, such was the painful twisting of arms and legs he was subjected to. The whole show seemed to be enjoyed greatly by the audience of parents, students and their friends. In that era, boxing and wrestling were popular spectator sports with weekly events at West Melbourne Stadium, now converted into Festival Hall. Eric Welch and Jack Little became famous for their hyperbole in describing the bouts on radio.

St Bede's, during the 1940s and 1950s, had a canny sports master, Brother Alban, who used these City Hall shows to raise money for the school. Raffle tickets were there aplenty. Since that time, boxing and wrestling on a professional basis have fallen from grace because of their violent nature and the rough atmosphere that sometimes developed at venues where they were held. Archie Kemp, a well-known boxer who came to one St Bede's fight night, died after a professional fight early in 1949 and that tragedy strengthened the case against boxing that was gathering momentum at the time. St Bede's discontinued the annual boxing tournaments in the mid nineteen fifties as the case against this sport gained ground.

Dick Garrard retired from wrestling after the 1956 Melbourne Games, but he remained dedicated to the sport he had chosen. Over the next four decades, he acted in various roles at the national level and also at the Olympic level. At various events he was, in turn, referee, judge, and manager of young wrestling participants. He served on the Olympic Committee for the Sydney Games. He was important in advising judges and referees in those Games wrestling events, having been deeply involved at the top level of the sport for several decades.

Garrard was awarded the Australian Sports Medal in 2000, an award that signifies a competitor of outstanding ability and performance at the highest level. Dick Garrard died at Geelong in 2003, aged 92.