State Savings Bank of Victoria on the corner of Charman and Park roads, Cheltenham, c1958. Later became the site of a branch of the Commonwealth Bank of Australia.

Prior to the creation of Victoria as a separate British colony, banks in District of Port Phillip were managed under regulations formulated by the government of the Colony of New South Wales. The Port Phillip settlement was part of New South Wales. After Victoria was declared a colony in its own right in 1850, a government statutory board known as the Commissioners of Saving Banks was formed. [1] The Board was responsible for the direction of Victorian savings banks and their branches. In 1896 an amendment to the banking arrangements saw the amalgamation of the Board with the Post Office Savings Bank to form the Savings Bank Department. [2] Further changes were formalised in 1912 when previously independent savings banks were merged to become a single institution known as the State Bank of Victoria.

The Commissioners of the new organization pursued the policy of expansion. They opened new branches throughout the State and by 1915 they claimed the existence of one hundred and twenty eight. Amongst the new additions reported were: Cheltenham, Mordialloc, Sandringham, Oakleigh, Brighton and Frankston. [3] Business hours for these branches were week days from 10.00 a.m. to 3.00 p.m., 10.00 till 12.00 on Saturdays and 7.00 p.m. to 9.00 p.m. on Friday evenings to receive deposits and to open new accounts.

The Cheltenham branch, commencing in 1913, was built on the corner of Charman and Tulip roads (later named Park Rd) at a cost of nearly £1000. [4] The contractor was W S Pollard of Malvern. The building was a single storey, clad with Tasmanian blue gum weather boards and an iron roof. It consisted of a five roomed residence and a banking chamber which included a strong room. The residence provided accommodation for the manager and his family. A key feature of the building was the strong room with fourteen inch brick walls, a ceiling of fifteen inch concrete and a twelve inch concrete floor. [5] 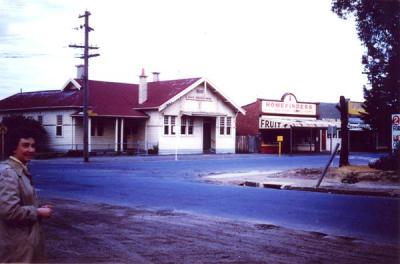 State Savings Bank of Victoria on the corner of Charman and Park roads, Cheltenham, c1958. Later became the site of a branch of the Commonwealth Bank of Australia.

The formal opening of the ‘handsome’ branch building occurred on 22 December 1913. Local residents who were depositors with the bank were urged to transfer their accounts to the new office. Once this was done they were told they could withdraw money on demand instead of applying to the central office or waiting the arrival of the post. The newspaper report of the opening was very optimistic about the bank’s future and expressed the wish that ‘every family in the district served by the new branch would take advantage of the facilities afforded to put something by for the rainy day’. Furthermore it advised, ‘Every man and woman knows what an immense advantage it is to have cash in hand when starting in life; some readers of this paper who have already commenced the battle of life for themselves will know from experience that the man who sets out with an empty pocket, and is obliged to obtain credit for a few pounds to make a start, is so heavily handicapped that he stands a poor chance of ever overtaking the man who goes into the market with a well lined purse and a healthy banking account.’ [6]

One of the services offered to clients by the new branch was a safe deposit facility. Exclusively provided for the safe custody of depositors’ valuables: deeds, wills, family papers and other important documents. For this service a small annual fee was levied and inspection or removal of valuables was available four times a year free of charge. Additional inspections were possible on the payment of a six pence fee. [7] Other services introduced by the bank in subsequent years were:

The Penny Saving Bank was a service provided through the co-operation of the Education Department and private schools. Bank Day was a designated week day when pupils brought to school their pink covered bank book and deposit money. Teachers would receive the money, record its receipt in the child’s bank book and on a bank pad which was sent with the money deposited to the headmaster’s office. There it was checked by a designated teacher before being forwarded to the local branch of the bank. Interest was paid to the account holder and a small commission was paid to the school for the work undertaken by teachers. It was argued by the bank that this practice promoted the idea of thrift amongst students and encouraged them to adopt good financial habits. The provision of money boxes was also part of the thrift goal. Boxes, costing sixpence, when full of coins were received by a bank branch, opened in the presence of the owner and the amount entered into his or her bank book. Damaged boxes were replaced free of cost.

At two o’clock on a Sunday in November 1914, almost twelve months after the opening of the Cheltenham bank, flames were seen billowing from the back of the property. Mr Milledge, the manager of the bank immediately tackled the fire with a garden hose. He was successful in dosing the flames prior to the arrival of the fire brigade. The fire occurred in the poultry yard at the rear of the bank destroying two sheds and incinerating about a dozen valuable birds. The cause of the fire was not identified and the suggestion that it was due to overheated incubators was rejected by the owner who said they were not alight at the time. [8] 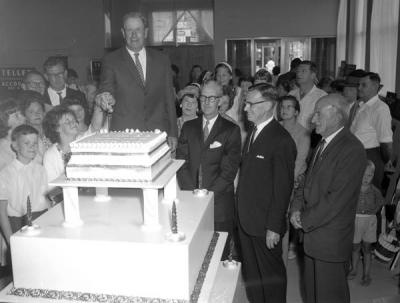 Tom Walter Gatliff was appointed manager of the Cheltenham branch in 1950 and came with his family from Merbein, Victoria. Barbara, his daughter [9], ‘recalled the bank had a pressed metal ceiling and was fairly sure there was a non-working gas lamp hanging over the teller’s counter. Along the front edges of the customers’ benches there was brass. In front of where the customers would stand to be served, there were brass rods with brass supports on which customers could wipe their muddy shoes. The two outside doors were heavy and would be bolted back when the bank was open. There were two closed inner doors. When coming into the bank the customer would pull open a door by pulling a brass handle. To leave the banking chamber there was a brass plate on each door to push open.

On coming into the bank the customer would turn right to a ledge where there were withdrawal slips. He would fill in the slip then go across to the other side of the banking chamber and post bank book and withdrawal slip down a slot. The clerk would collect it, check it for accuracy, enter the amount to be withdrawn in the ledger, and then take it to the teller who would call out the name of the customer, ask how he wanted the money and pay him after filling in the bankbook and signing it.

To bank money it would just be taken to the teller who would write in the amount in the bank book and put it into a drawer with sections (out of sight of the customer). And the bankbook would be passed to the customer.

Above the ledge with the banking and withdrawal slips was a wooden roll of honour of those who had worked in the bank and served in World War One with a cross beside the name of any that were killed.

There was not an indoor staff room where bank officers could eat their lunch or use a toilet. The suburb of Cheltenham was rather late having sewerage installed. The bank had a septic tank. If a member of the staff needed to go to the toilet he would have to get permission to leave. Go out the front door, along the side of the building to the staff toilet that adjourned the residents’ toilet in the back yard.

Barbara remembers arriving in Cheltenham in the middle of 1950 and thereafter cleaning the brass and sweeping and dusting the banking chamber. She also changed the calendar which was one that had separate knobs to turn for days, dates and months. [10]

The result of the demise of the State Bank and its succession by the Commonwealth Bank meant for Cheltenham there were two branches of the same bank on opposite corners of Charman and Park roads. In time the State Savings Bank, once described as ‘handsome’, was demolished and a new building constructed into which the existing Commonwealth Branch moved. The building vacated became the office of an estate agency and later the site of a Domino Pizza place.