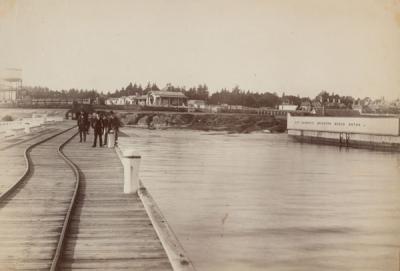 In the 1850s Captain William Kenney established his reputation as a pioneering proprietor of swimming baths at St Kilda. Born at Harwick in England in 1820 he came to Melbourne at 32 years of age as captain of the Yarmouth which was conveying emigrants to Victoria arriving on 16 December 1852.

Remaining in the rapidly growing town Kenney sailed the Apprentice in trading activities along the coast until the ship was wrecked on King Island. He then turned to providing accommodation for sea bathing catering to ‘all persons, no matter what their degree or position.’1 He purchased the Nancy, an old 200 ton Swedish vessel and offered his patrons a bath in the ‘best Bathing Site in the Colony’, an area fenced in and free from fish, free from observation, with depth of water varying from twelve down to three feet.2 Initially, the Nancy was scuttled and beached in ten to twelve feet of water some distance from the St Kilda shore. Access for bathers was gained via a small boat provided by Kenney and linked to the shore by a rope. Later, the authorities ordered the removal of the Nancy to an alternative site opposite the western end of Fitzroy Street. There the ship was permanently anchored, and connected to the shore by a narrow pier making the small boat provision unnecessary.3

In 1872 a notice in The Argus newspaper announced that Captain William Kenney was engaged in building baths at Brighton Beach in the Shire of Moorabbin.4 During the years of the 1880s there were several cases of drowning occurring in these baths as well as in the Bay. After one death at Brighton the Minister of Lands directed, in 1883, that an investigation be held of all baths paying rent to his department, and a report be prepared on the measures implemented to ensure the safety of bathers. Mr Le Capelain of the Central Board of Health was appointed to carry out the task.

Le Capelain, reporting to the Minister in February 1884, declared the Brighton Beach baths were unsafe and recommended that bathing be prohibited during stormy weather. The swimming enclosure was ‘roughly and very defectively constructed’, he wrote, ‘where many of the piles were nearly eaten through, by sea worm’. Moreover, ‘the fencing palings between piles were in places so wide apart that a shark of dangerous size could find its way into the enclosure’. He concluded that ‘There was a danger that the recoil of waves washing through the fence during strong south westerly winds could wash swimmers against the fencing, injuring them and making it highly dangerous for individuals to render assistance.’ In Le Capelain’s view it would be cheaper to construct a thoroughly new and safe enclosure than to attempt to patch up the existing one.5

The Brighton Beach baths were again in the news in 1885 when a correspondent to The Age reported indecent conduct at the public baths. Constable Meagher was called to the baths because a number of bathers were standing exposed on the piles and acting indecently. They were just a little more than 100 yards from the pier which was crowded with women and children. The constable was successful in arresting only one of the alleged offenders, a young resident of Carlton who appeared before a local magistrate and was remanded to appear at the next session of the police court.6

At the beginning of the twentieth century increasing criticism was being levelled at the condition of the Brighton Beach baths. Brighton councillor, Cr Yuille, thought it a disgrace that better baths were not provided. He believed that if first class, up-to-date facilities, were provided hundreds of people would travel from Richmond by train to access them and make the necessary investment a financial success. In addition, he claimed, good baths would provide a strong inducement for people to reside in the district.7

In March 1903 a deputation representing Brighton residents waited on the Minister of Lands, Mr Taverner, asking that he grant a site for the building of first class baths for women and men at Brighton Beach. The Minister was reluctant to give an answer because he believed he should consult with the railway authorities who had expressed interest in erecting baths at Brighton and had prepared preliminary plans.8

In January 1905 the Lands Department brought a case against Captain Kenney at the Brighton Court, claiming that his licence issued in 1892 had expired and he should give up possession. The case was adjourned but seven months later ‘Engineer’ in writing to the editor of The Age wondered how long the public had to endure the humbug regarding the renewal of the baths contract at Brighton Beach. In his view, the seaside ought to be the show place of the metropolis with baths not only safe but also ornamental. He believed the current baths were not only unsafe and insecure but also a disgraceful eyesore.9

Captain Kenney responded in a subsequent issue of The Age to Engineer’s criticism claiming he was ‘a writer who courageously shelters himself behind the hedge of anonymity’ suggesting his statements were false and misleading. Kenney claimed he had maintained the baths and ‘spared no expense to make them attractive and useful to the people of Victoria.’ He encouraged a visit of an independent expert to report on the safety and security of the baths so that an accurate assessment of their condition could be made public.10 But the arguments and agitation continued.

A new deputation to the Minister of Lands took place in 1906 asking that Captain Kenney be compelled to put the baths in order or his lease cancelled. The leader of the deputation, Henry Butler, said the baths were unsafe and unclean. Kenney, who was present at time of the deputation, challenged the statements being made, calling them lies.11 A few days later the Minister visited the baths and expressed his dissatisfaction with arrangements and suggested that with some repairs a five year lease could be offered but Captain Kenney declined, preferring an annual lease.12 Twelve months later Captain Kenney was dead at 86 years of age .

Who should take over responsibility for the Brighton Beach baths? The State government looked into purchasing them, perhaps in association with the railways department, while the mayor of Brighton was asked to call a meeting to galvanise the authorities to put the baths into a proper state of repair.13 Offers were made to the Brighton and Moorabbin councils but they refused to take responsibility. Finally, the baths were purchased by the government and offered for a nominal rent to anyone who would rebuild them and make them fit for use. Shortly after, the Minister announced that he had agreed to lease the baths to Edwin Penny of Cheltenham for £10 a year for twenty one years and that Mr Penny agreed to spend £1,200 to £1,300 basically to create a new structure.14

After some months, the old dilapidated building was replaced by an ‘imposing structure’ in which Penny had invested over £1,000. The sea wall had been extended in order to permit deep sea bathing, a large concert hall had been erected and provision had been made for hot sea water baths. The baths were officially opened by O R Snowball MLA on Saturday 26 November 1910 in the presence of the Mayor of Moorabbin Cr Burgess and several councillors.15 A little more than seven years after the official opening of Penny’s Baths a violent and freak storm caused havoc to the structure blowing parts of the roof a great distance across the Sandringham railway line. The damage caused was estimated at £250 to £300. Bathers sheltered in the Royal Terminus Hotel during the storm dressed in their swim suits as their clothes had been swept into the sea.16 Another storm, four years later, in 1922, caused considerable damage due to its violence. Huge seas swept the piers at Brighton Beach and Middle Brighton and strewed wreckage along the beachfront. Portions of the baths were washed away, small craft sunk and yachts blown ashore.17

A notice in The Argus of January 1928 announced that the Brighton Council had taken over the management of the Brighton Beach Baths. The council set about making temporary improvements. Powerful lighting was installed, landings repaired, community dressing rooms made available for the summer season, and times of operation notified. Men only had access from 6.00 a.m. to 9.00 a.m. but for the remainder of the day until 10.00 p.m. mixed bathing was an option. The claim was made that these were the only baths on the foreshore to provide for mixed bathing.18 On one hot day in February it was reported that more than 1400 bathers availed themselves of the mixed bathing facilities, justifying the expense of council in making temporary improvements and arrangements for mixed bathing.19

Despite the changes, by 1930, a local progress association meeting unanimously passed a motion that the council should construct new baths. This followed speakers claiming that the baths were an eyesore and a disgrace to the municipality. It was said that in some places a rowing boat could gain entrance and sharks could enter unhindered. 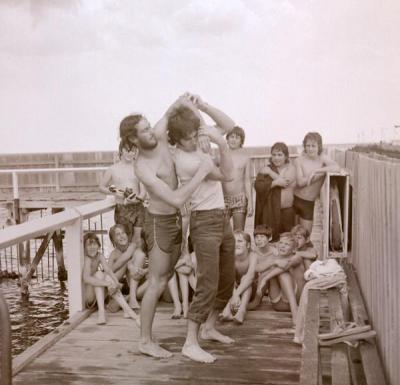 The progress association sent a delegation to the Brighton Council in May 1930 urging them to construct enclosed concrete baths at Brighton Beach. A local member of parliament pointed out that the government was making money available to provide work for the unemployed and if the council commenced the building of the baths immediately it was probable ‘the government would render substantial financial assistance’. Miss Cox from the Education Department supported the association’s request as enclosed swimming areas were indispensable for the work of teaching swimming to children. Teachers, she said, would not take squads of children to the open beach.20

But councillors were not unanimous about allocating £15,000 to the suggested baths project. Wild seas in 1934 created more devastation to the baths. In 1938 a fire completed its destruction, despite the actions of firemen from brigades in Brighton, Sandringham and Windsor.21

The tender to build a shark proof swimming enclosure at Brighton Beach submitted by C E Patience of Glen Huntly for £4,177 was accepted as was the tender of Weavell & Keast of Melbourne of £4,955 for the construction of dressing pavilions.22 The newly completed baths were officially opened by the Mayor of Brighton, Cr F Rogers, on 12 December 1938, giving the council an asset judged to be the most modern around the Bay.23 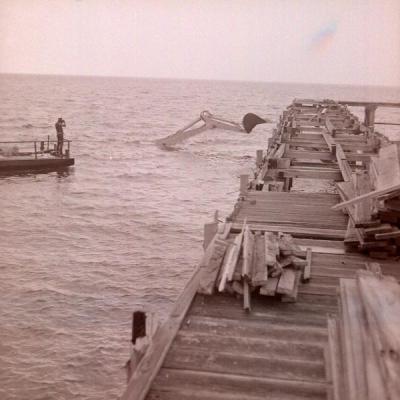 By the 1970s attendance at the baths declined. Schools and homes built their own pools and the baths needed renovation and further financial investment. As Bates points out in his history of Brighton, during the seventies Brighton residents dug about a thousand pools in their gardens. He wrote that baths were becoming an anachronism in a more affluent age.24 The Brighton Beach Baths were demolished in 1979.