On 19 September 1840, an announcement was made overseas that was to change the character of migration from Britain to Australia, for on that day England gave way to demands being made in the Colony of New South Wales to put an end to the transportation of convicts to this country. From then on, the whole of the country, after more than 60 years of transportation, was to become a nation to which only free settlers could migrate.

Port Phillip (now Victoria) on the other hand had from its very beginning as a colony on 29 September 1836, refused to accept deported convicts and, although the District was under the direct control of the Governor of New South Wales, local residents vowed that no convicts should be landed in Melbourne. By standing firm on this point many of the overseas people who applied for the right to migrate to Australia under the ‘Bounty System’ of assisted immigration began to arrive at Port Phillip. The New South Wales Governor, George Gipps, granted permits for sponsorship of migrants to ‘all respectable persons or firms who applied for them’ and then granted the nominators a cash bounty for each immigrant they brought to the country.

Thus between January 1839 and March 1841, sixteen migrant ships found their way into Port Phillip and among these was the Coromandel, arriving on 11 July 1840, bearing among its passengers the first two members of the Keys family to arrive in this country. Both were seeking a new life away from Ireland where unemployment was rife and living conditions for the vast majority unbelievably crude. Indeed the Bounty System of emigrating to Australia brought a new hope to the Keys family of County Tyrone in Northern Ireland, and it was the second eldest son and eldest daughter of the original George Keys (William and Mary Jane of Donamurra), who agreed to act as the vanguards of their family in being the first to test the worth of such migration. The information listed in the shipping files of the Coromandel on its arrival in July 1840 listed them phonetically under the names of William Kais and Mary Kais, because of their Irish brogue. Williams’s occupation was stated as that of a labourer and Mary Jane’s as a house servant, both could read and write and were members of the Presbyterian faith. Records also show that William was engaged to work for Mr John Hodgson of Melbourne for a period of six months for forty pounds per annum and rations, while Mary Jane was to work for Mr I Shaw for a similar period at twenty pounds and with rations. The age of William was given as 19 and that of his sister at 17. Ten months later, the parents of the young man and his sister (obviously spurred on by glowing reports arriving back in Ireland) gathered the remainder of the family together and boarded the Catherine Jamison at Leith in Scotland, and on 29 May 1841, the newly built barque of 451 tons was headed for Bahea (on the East Coast of America) to complete the first leg of her journey to Australia, conveying the family to their new homeland.

It should be pointed out that the ages of parents as shown in the shipping records were not always correct, but often as not they were understated. This had nothing to do with vanity; but rather it was a matter of convenience, for the Bounty System of assisted passages was not open to anyone aged forty or over and desperate people thought nothing of ‘forgetting’ a few birthdays if remembering them barred them from becoming migrants. Thus we find George Keys, 37, with a wife of 35 and an eldest son, Robert, aged 23. The Interment Book at the Brighton Cemetery a more reliable source of information gives George’s year of birth as 1792, suggesting that when he arrived at Port Phillip he would have been 48 or 49 years of age. The same journal lists his wife, Margaret, as being three years younger which means that she would have been 45 or 46 at the time.

George Keys and his sons Robert (23) and Isaac (15) were each listed as labourers, while his wife Margaret was mentioned as being a housekeeper, and the two daughters, Elizabeth (13) and Margaret (9) as house servants. The two youngest sons, Thomas (7) and John (12), no doubt because of their tender ages had not been classified in regards to occupation. Members of the family were all listed as Protestants coming from County Tyrone, Ireland.

Soon after arriving in Melbourne, the family leased land at Preston and began dairy farming with 75 cows, but in 1845, George obtained a leasehold over part of Alex McDonald’s Moodie Yallo cattle run and built a home on part of the land which is now known as Keysborough. Following Victoria’s separation from New South Wales when the old cattle run properties were being divided and sold up, Robert Keys purchased 377 acres between Bernard Street and Chesterville Road, Keys and Warrigal Roads. Robert, having made good through breeding horses and cattle was, on 23 December, married to Charlotte Brown, aged 26, when he himself was 29, but the couple, instead of going to Moodie Yallo, moved into the living quarters of the Bush Inn which they had built for them at East Brighton. Robert’s further success, this time as a publican and the proprietor of a racecourse near the corner of Centre Road and Nepean Highway, in turn made it possible for him to purchase the land he bought on Bernard Street on the opposite side of the road to Holloway’s Two Acre Village. 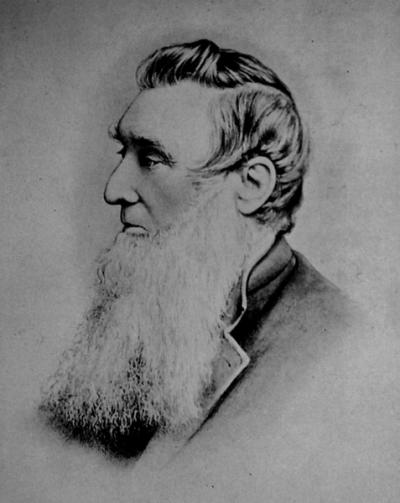 George Keys in the meantime was becoming worried about the lack of a Presbyterian Church in the district, but worse, he couldn’t even persuade a Presbyterian Minister to travel 12 miles from Brighton and through the wilderness to his Moodie Yallo homestead. Finally, he settled for a Methodist Minister when Mr Bickford agreed to make the journey, and it was with a good deal of pride that the Minister made an entry in his diary saying, ‘the first religious service in the locality was held at the Keys’ homestead in 1853, and was attended by Mr and Mrs George Keys, Mr and Mrs William Keys, Thomas Keys and several neighbours. It was unique spectacle in the midst of the Australian forest – a nucleus of light and moral force for the whole neighbourhood.’ Services then continued to be held on a regular basis at the Keys homestead until 1861 when a church was built. This was a wooden building with an iron roof which was used until the more permanent structure was erected and opened in 1877, four years after George Keys had died, at the age of 81. His wife, Margaret, predeceased him aged 70 in 1865. At the time of his death, George owned land extending into the Shire of Moorabbin and as far down as Wells Road, which was then in Dandenong. 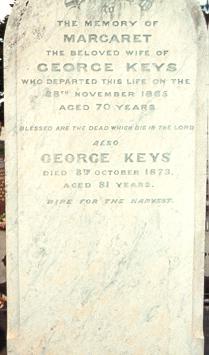 Grave stone of George Keys and his wife Margaret in the Brighton Cemetery.

The original male members of the Keys family were all public spirted people. Robert was a member of Brighton Council in 1860, and was closely associated with Sir John O’Shanassy whom he was able to persuade, when he was Premier of Victoria, that the boundary of Brighton should have its eastern boundary at Thomas Street instead of Nepean Highway, despite the fact that he was a Brighton councillor. He played an active role in the formation of the first Moorabbin Council in 1862. In 1871, he sold his hotel business at East Brighton and went to work on his Cheltenham land where he had 15 acres under orchards along Chesterville Road. In 1881-82 he took first prizes for the best kept orchards in the district. Ultimately, he served for seventeen years as a Brighton Councillor, and after moving to Cheltenham, where he also became licensee of the Exchange Hotel, he served eleven years as a Moorabbin Councillor (1876-87) including one term as Shire President; he was still a Councillor in Moorabbin when he died on 27 September 1887, aged 67, leaving a widow and eight sons (his only daughter died at the age of seven years). His wife, Charlotte, died 14 April 1890. 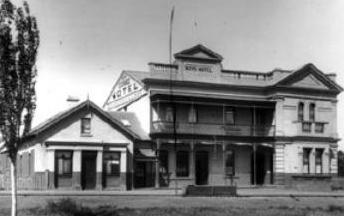 It is interesting to note that during 1887, when many new municipalities were appearing, a younger generation was becoming noticeable for their interest in council activities. At Dandenong, Thomas Keys was a councillor in the South Riding, and John Keys was secretary/treasurer and engineer, and also held the same position on the Moorabbin Council and served with Cr George Keys as a Justice of the Peace at Cheltenham Courte. Collector and Inspector of Dogs for Moorabbin was another George Keys, while Thomas, the Dandenong councillor, served on the Bench as a Justice of the Peace at Dandenong. 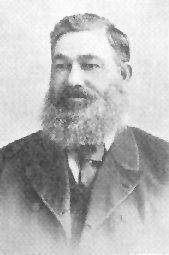 Members of the Keys family indeed were to be found in the agricultural societies, councils and as Members of the State Parliament from Moorabbin to Dandenong, Cranbourne and Berwick for well over half a century, each one adding a touch to progress from a time when Melbourne was a small town that had only been in existence for five short years, and the State of Victoria was no more than a forlorn hope yet the incredible part of the story is seen in its beginning with two teenage youngsters, who in their determination, trekked half way across the world to prove that a better world than the one their family knew was there for the taking.