After World War One, Mentone enjoyed a period of fast growth that lasted until the Second World War. An important person in promoting this faster development was Albert Lydford, an Englishman who came to the town in 1924. 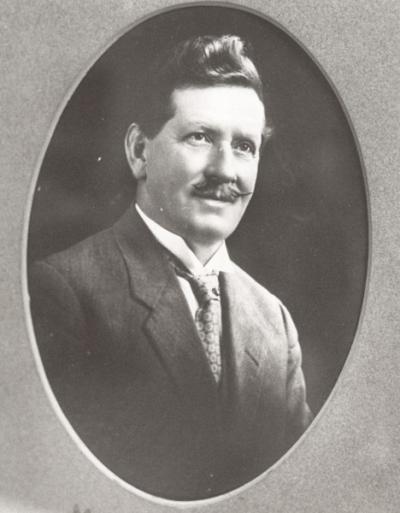 Mentone had been established as a substantial town from the early 1880s onwards. The railway reached Mentone in 1881, though the station was called Balcombe until changed to Mentone in 1884. Matthew Davies, a land boomer who owned property throughout the district near Mentone, gave the town its Riviera-style name to lure land buyers into the area, coaxing them with a wishful dream that they were to live in the 'New Riviera of the Southern Hemisphere', as Davies painted it in his promotion. All went well for this plan during the 1880s, but by 1892 the big bust had come as land prices collapsed and many speculators were ruined. Mentone's growth was halted by this deep economic depression, but it remained a viable suburb of Melbourne until the 1920s when a new burst of building began, with new homes occupying many of the formerly vacant blocks.

Albert Lydford played a big role in the dramatic Mentone growth at this time. He was born in Bristol, England, in 1874 and migrated to Australia in 1905. After living in Oakleigh for nearly two decades he moved to Mentone in 1924. Lydford was very entrepreneurial and established a factory in Swanston Street, near Point Nepean Road. He produced wood stain products and wax finishes for the building industry. Albert also ran his own building business. He purchased a large area of land that had boundaries along Balcombe Road, Point Nepean Road and Swanston Street. Here, during the mid-1920s, he erected many houses as well as a row of six shops that faced the Point Nepean Road. During 1927 and early 1928 Lydford supervised the building of a Mentone landmark that occupied a large block on the corner of Balcombe Road and Point Nepean Road. This was the New Mentone Picture Theatre that was advertised as capable of seating 1300 patrons. Lydford's theatre and shops, located away from Mentone's railway station and shopping centre, were part of his ambition to move Mentone's centre to the Nepean Road precinct. He had already engaged in a fierce and unfriendly argument with the Mordialloc City Council over this matter. Here is why. 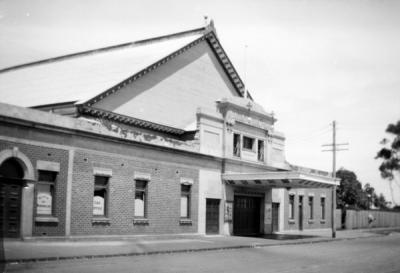 Much earlier, the group of land boomers led by Sir Matthew Davies had built a skating rink, tennis courts and a recreation reserve in the Brindisi Street location where Kingston offices are currently. They also ran a movie show in the skating rink, screened by a local producer. These power brokers had refused to allow Lydford to build another picture theatre in the town centre, near the station, and a bitter dispute ensued. After angry discussions, the Council reluctantly allowed Lydford to build his theatre away from the town centre, on the Point Nepean Road-Balcombe Road corner. It opened in May, 1928. The opening night was a lavish affair. One movie starred a young Gary Cooper. There was a large audience, including important invitees, dressed up for the occasion. Lydford then began to carry the fight to the Mentone Establishment power brokers by putting enormous energy into convincing people that Mentone's central business area would soon be in the area around his huge picture theatre. The dispute was quite comical because the movie show run by a friend of the Council that was screened in the old skating rink was advertised heavily in a bid to outdo Lydford. The rival picture shows were advertised side by side graphically in the local papers with exaggerated claims of superiority. Lydford began to extend his screenings and eventually had movies on six days a week. The Council-backed movie show was also screened up to six days a week, notably with hardly anyone attending early in the week. Of course this ridiculous battle had to end. As 1930 neared the Council did a deal with Lydford and in return for certain concessions the New Mentone Theatre prevailed on its own, becoming a social centre for locals over the next thirty years. Movies in the skating rink soon ceased and the old complex was pulled down in the early 1930s to make way for the new Mordialloc City Hall and Council Offices.

Lydford's New Mentone Theatre quickly became a popular social entertainment venue. At children's Saturday matinees in the 1928-30 period, the kids were shouted a few lollies and for a while there were gifts. Each week prizes such as cricket bats and footballs were offered to the lucky child who was in a certain seat. One week the organisation that represented Hollywood's MGM in Melbourne agreed to send a vehicle, decorated so that it looked like a railway train from the old Wild West, to Mentone. The kids at that matinee were given rides before the show and at intermission. Then came the serials where cowboy movies, or cops and robbers shows, ran for about ten weeks. Of course, each week's episode ended at an exciting point where the hero was about to be killed, or perhaps hit by an avalanche. The kids begged their parents to go back the next Saturday. Of course the hero survived again. Many Mentone people, and others from nearby suburbs, had bookings each weekend for the main feature films of the time. Broadway Melody, Casablanca, Mutiny on the Bounty, and dozens of other popular movies came to Mentone's screen. Lydford was keen to develop the area near his cinema so that it was Mentone's central business district. This never happened, but he did build a row of shops close to the theatre, and he invested in housing along Balcombe Road and Swanston Street.

Because of the Depression's lasting effects during the 1930s, Lydford never enjoyed complete success in these endeavours. He suffered heavy financial debt during the whole decade. He had invested up to £30,000 in building the movie theatre, the shops, and a substantial number of modern homes along Balcombe Road between the lawn bowls rink and the theatre. He erected others in the triangular land block between Swanston Street and Point Nepean Road. The depressed times meant he struggled to make money out of these investments. It was a time when builders often laid out lawns and gardens around new houses in an attempt to attract buyers. Lydford was ageing too. It is probable that the stress of his business interests affected his health. He died at Mentone in 1946, aged 71. Albert Lydford was important in Mentone's strong growth during the inter-war period. The theatre has gone unfortunately, killed by TV in 1961, but some of the solid homes he built along Balcombe Road are still standing. He played an important role in our history at a time when being a developer was not easy.