The Siding at Mentone Railway Station

When the railway reached Mentone in 1881 there was provision near the downside of the station for a siding which was reached by using a spur line off the main track. The purpose of this spur line was to allow goods trains to shunt rail trucks to the end of the siding near the station itself. It was of immediate use for the delivery of building material used in erecting the station ticket offices. The land boom of the 1880s meant that many houses, some of them mansions, were built in the central Mentone area and down near the beach. Most of the timber, bricks, glass, tools, and other material came to the town by train. At that time roads were primitive and horse-drawn vehicles slow, cumbersome, and unwieldy. Long hauls of heavy materials were shunned. But for short trips, local shopkeepers and other businessmen had to use horses that pulled drays into the siding. These work vehicles could be pulled right beside the rail trucks, loaded with the commercial goods, then driven to shops, factories or other workplaces. As the 1900s wore on, motor trucks gradually replaced the drays.

Mentone in the mid-twentieth century had become a most important shopping hub in the area between Moorabbin and Chelsea. It had several busy grocers (Crofts, Moran and Cato, Crooks National Stores and the Cheltenham Co-op., as well as quite a few corner stores selling groceries in basic milk bar settings away from the main street). It had four greengrocers, two chemists, several clothing retailers, a toy shop, two fish shops, and two hardware merchants. Firewood could be purchased at these hardware outlets. Many people walked to the main street, making it a social setting as well. Much of the produce sold in Mentone came there through the siding.

From its earliest days until the 1950s, Mentone had a gas works in Brindisi Street. Operated at first by the local council, it supplied gas to many homes before the Gas and Fuel Corporation took over all local gas suppliers and closed smaller ones to centralise production at Highett. Until the mid-1950s, Mentone's Gas Works was supplied with black coal that came by goods train to the siding from where it was delivered to the gasworks by drays and, later on, by motor trucks. Brown coal also came by train. Victoria's Latrobe Valley brown coal reserves were used to generate electricity from the 1920s, and they formed the basis of a large industry that manufactured briquettes, made from brown coal, which could be burned in fireplaces for home heating. Rail trucks full of briquettes were common in the Mentone siding.

In 1913, Caudwell Brothers, a firm that had a timber and joinery works near the station, built a railway spur line out of the siding, across Station Street, and into their large property, the entry point being through the land now occupied by Mentone Pre-School. Thus, logs and other industrial goods could be hauled on rail wagons straight to where they were being processed in that large commercial property. The line was used for about twenty years until the Great Depression put the Caudwells out of business. The steel rails remained in the roadway until the siding was turned into a car park in 1986.

The siding was also used when Mentone had the horse races at the course near Lower Dandenong Road, about half a mile away. On race days, several Race Special trains would arrive at Mentone carrying many hundreds of race-goers during the middle part of the day. The punters either walked to the track or paid the cabbies and hire-car drivers to get a ride to the course. The race trains shunted back down a spur line that stretched to Moorabbin Road (now Warrigal Road). One train would be in the siding having been diverted off the main line by use of the set of 'points' manually operated by a station porter. As the afternoon elapsed, the Race Trains would be shunted back to the main line and into the station where the crowds of punters, some looking jubilant, but many feeling less wealthy, boarded the 'red rattlers' bound for the city. 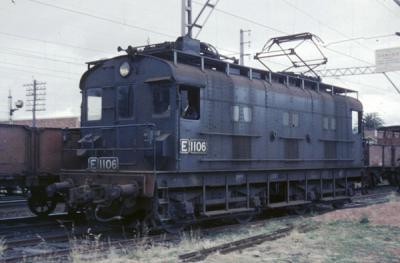 The siding was removed in the mid-1980s because there were no races at Mentone after 1948, and by the 1980s goods trains were being phased out, as motor transport, employing big semi-trailers, supplied retail stores and other businesses that accepted deliveries of goods directly to the store or factory.

Up until the 1960s, goods trains shunted trucks into Mentone siding several times a week. Originally, steam locomotives did the shunting, but by the 1940s black electric locomotives were the sources of power. Convenient road transport caused the demise of the goods trains and the rail lines into the siding were pulled up. In 1986, the siding became a large car park for commuters who drove to Mentone from homes a fair way from the railway station, such as Braeside and Heatherton, providing a use for the area not envisaged by early Mentone pioneers.