When the land boomers opened up the broad Balcombe paddocks to lay out the new Mentone township in the early 1880’s they reserved a central section for sports and amusements. Broadly the block in Mentone Parade, flanked by Brindisi and Venice Streets, is still used for the purposes the founders intended, but there have been some interesting changes in a little over a century.

Matthew Davies put in his original plan for the Mentone he dreamed would become the ‘Riviera of the South’ in 1883. His reserve in the centre was relatively small by our standards but he was planning a much smaller settlement than the broad sweep of suburbia that is now called Mentone. The boundaries confined the town to the area inside a line drawn along the beach, Plummer Road, Balcombe Road, Warrigal Road and back to the beach again. Of course there were a few settlers outside this roughly rectangular area, but the main group of Mentonians were expected to be in the central block and for them the Mentone reserve would be sufficient.

When rapid building development occurred after World War 2 and Mentone expanded well outside its old boundaries, it was arguably worse off than some neighbouring suburbs when it came to sporting fields. Dolamore Oval was devoted to athletics and there was just one other oval created, at Southern Road where the old Mentone Golf Course once existed. Mentone Recreation Reserve came under increasing pressure as sporting teams vied for places to play. Mentone Grammar School and St Bede’s College had small ovals which were much in demand for weekend fixtures from the 1950’s on but there were many teams which struggled to get on a local field.

All this was far from the minds of Mentone’s early citizens. They had other problems to solve concerning their reserve. To begin with, the paddocks between Mentone Parade and Milan Street were low-lying and swampy, with water lying around after rains and swamp grasses growing profusely. The Davies companies spent a lot of funds draining the swamps with outfalls under the Beach Road to the sea. Then a rough sporting field could be laid out. Around this were built a skating rink, a recreation hall and some tennis courts. A small park fronted Mentone Parade with trees planted and lawns established. The century-old pine trees which remain near the Council Offices date back to that time. 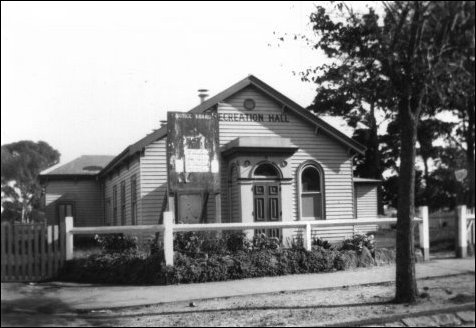 The skating rink was in Brindisi Street where the Kingston Offices are now and it was also used for dances, picnic party accommodation, and larger local gatherings of all types. Soon after the new century began it became a movie house for the silent film era until the new theatre opened in 1928. The Recreation Hall was built on the corner of Venice Street and Mentone Parade, being a small hall of weatherboard construction with a wooden observation tower next to it for tourists to view the district and the bay. Two lawn tennis courts were laid out on the Brindisi St-Mentone Parade corner to complete the facilities in the reserve.

As the 1880’s wore on cricket, football and tennis clubs were formed in Mentone and, despite periods when they went into inactivity, the clubs occupied the Mentone Reserve facilities from then on. Until early in the century the private owners charged rentals for all the groups who used the hall, skating rink or sports and picnic grounds. The Moorabbin Shire began to become involved when in 1893 a council resolution registered the Skating Rink and the Recreation Hall as a "Dancing Saloon" and charged a fee of two guineas for each building.

The companies that owned the reserve and its facilities experienced difficulties during the 1890’s depression and could not afford the upkeep of the assets. The downturn in activity affected the profitability of the venue so that by 1904 there was pressure for the Moorabbin Shire to buy the reserve and run it.

Between November 1904 and April 1905 the council negotiated to purchase the whole reserve, including its buildings, for two thousand pounds. The funds for this purpose were borrowed, with a security including the property itself and the promise of a special rate on the Mentone and Parkdale residents, inside certain boundaries, which would raise £800 of the cost.

Moorabbin Shire now controlled what events could be staged at the reserve and how much would be charged. They immediately set up a committee of councillors to deal with their new asset and announced a scale of charges for patrons. These ranged from seven pounds on peak days like New Year’s Day, King’s Birthday and Boxing Day when the whole venue would be booked by picnic groups, down to two shillings and sixpence for ‘regular Lodge Meetings’. Ordinary Saturday letting for the grounds and halls was four pounds, while Mentone cricket and football clubs paid ten shillings per annum each. Political meetings attracted a one pound fee, as did the use for a polling booth, while other meetings were much less costly at five shillings. A caretaker was appointed at an annual reward of four guineas, with extra pay each time a function took place. He had to supply firewood and boiling water to visitors and make sure no horses or cattle strayed on to the grounds.

In 1905 there had been negotiation to allow the building of a small fire station near the Recreation Hall. It was proposed that the firemen would have use of the observation tower which would be repaired with the addition of a bell to warn locals of fire events. There was a rethink of this proposal when a meeting with the Metropolitan Fire Brigade officers resulted in granting land for the fire station on the corner of Mentone Parade and Brindisi Street where it was erected over the remains of the tennis courts. The fire authorities agreed to pay twenty five pounds to the council for moving the Recreation Hall to Brindisi Street. This was never done. Perhaps it was a bit of clever bargaining to win some funds. The tennis club eventually played on new courts at the back of the bowling club (now the back rinks).

When the Mordialloc municipality gained severance from Moorabbin in 1920 it quickly became a town and then a city in 1926. The new council had to meet somewhere and eventually rooms at the skating rink were made the seat of local government. During the twenties the cinema continued in the same building, and periodically other functions, such as meetings and dances, were held there as well. The Brindisi St. quarters became hopelessly inadequate, especially with the rapid growth of the municipality during the inter-war period. In the early 1930’s the whole complex was remodelled. The skating rink building was drastically altered and a council offices and meeting room section was created adjoining a spacious new hall, known as Mordialloc City Hall. The hall was behind the council chambers and backed on to the cricket ground fence. A gas showroom was upgraded to show the appliances available through the council’s gas works down the street. In 1925 a small library building was created behind the fire station to house the public lending library. Over on the oval wooden perimeter fencing went up and a new pavilion for the cricket and football clubs was opened in 1928. A small bore rifle club had a tiny range behind the fire station as well. Just before the Second World War started the Recreation Hall on the Venice Street corner was destroyed by fire. 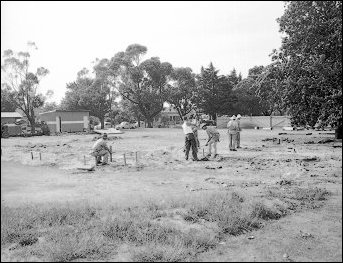 The war and its aftermath of shortages prevented any further developments until the late fifties. These can be summarised as follows:

1988: Extensions and rebuilding of city offices which become the Kingston City Offices after 1994 with further refurbishment. 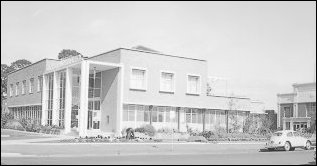